Man shot in face during altercation on Cedarwood Drive

A young man was shot in the face during a gunfight with another man in the Herongate neighbourhood late Tuesday afternoon, Ottawa police said. 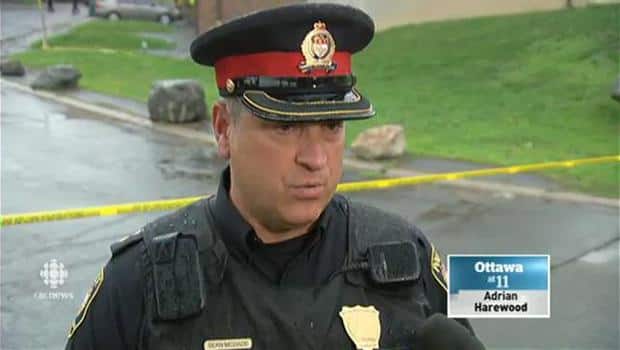 6 years ago
2:18
A man is recovering in hospital after being shot in the face on Cedarwood Drive. 2:18

A young man was shot in the face during a gunfight with another man in the Herongate neighbourhood late Tuesday afternoon, Ottawa police said.

It happened in the 2800 block of Cedarwood Dr., between Heron Road and Walkley Road, at about 5:20 p.m. on Tuesday. Police received several 911 calls from residents about multiple shots being fired.

Investigators say two men were shooting at each other in the residential neighbourhood.

One of the two men, who is 22 years old, was taken to hospital by paramedics after suffering a gunshot wound in the face. He ran into a police officer while fleeing the scene, said acting guns and gangs unit Staff Sgt. Ken Bryden on Wednesday.

Police said the man is awake and talking, but that he is refusing to co-operate with the investigation. He is known to the guns and gangs unit and has a criminal record.

A handgun and ammunition were found at the scene and have been seized by investigators. Multiple shell casings were also found. The gun was found in a green bin sitting outside of a home on Cedarwood Drive.

Police have not yet identified the second suspect, but investigators have recovered surveillance video from a nearby Dairy Queen, where the two suspects had been earlier on Tuesday.