Planning committee to consider whistling down turf war at Immaculata

The city's planning committee will consider shortening the operating hours of a new high school sports field due to community concerns.

People who live next to the renovated Immaculata High School field are hoping the city's planning committee will do something about late-night noise and bright lights from commercial rentals of the field.

The Ottawa Catholic School Board made a deal with Ottawa Footy Sevens that paid for a $2-million renovation and granted the soccer company the rights to rent and operate the field after school.

On Tuesday, councillors on the city's planning committee will consider forcing the field to close earlier than the city standard of 11 p.m.

Hanya Soliman lives at the north end of Glenora Street, where lights for the field, a fence and net for errant soccer balls were installed this summer.

"My house is like a metre-and-a-half from the property line. It means that my kids and myself are not going to be able to sleep until the lights go out," Soliman said. 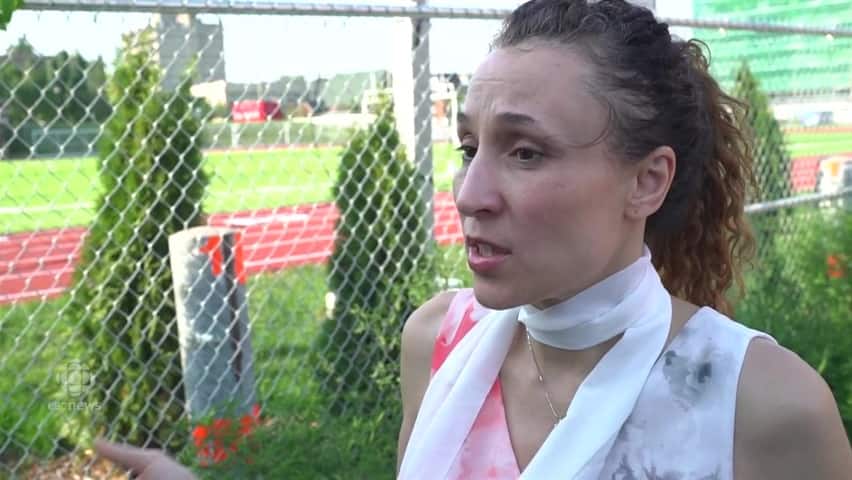 2 years agoVideo
0:47
Hanya Solima lives next to the renovated Immaculata High School field and is concerned homeowners will be disturbed by late-night noise and bright stadium lights. 0:47

Soliman is among the residents who support restricting the field's operations to 9 p.m. on weekdays and 10 p.m. on the weekend. She said that is an "absolute minimum," though she'd also like for the field to open later on weekends.

Coun. David Chernushenko, the incumbent running for re-election in Capital Ward, said he has decided to go to the city's planning committee after informally requesting changes from the Catholic board and Footy Sevens.

"Unfortunately, they declined on multiple occasions," Chernushenko said. "I think we should expect better, particularly from a public school board — a publicly-funded school board — and that is disappointing."

In a statement, Catholic board spokesperson Mardi di Kemp said the changes to the Immaculata field have all been done within the city's rules.

"The issue before the planning committee would treat this one field differently than every other sports facility in the city of Ottawa."

De Kemp said those changes could also mean less community access, since current availability was based on being able to open and rent the field until 11 p.m.

Though the school board said there will still be several hours a day of free access to the field for residents immediately before and after school.

Chris Surgeoner, co-owner and administrator of Footy Sevens, declined CBC's request for an interview, but did answer some questions by email.

He said the community will be able to use the end-zones of the football field during soccer games and access the track as well. Surgeoner said league coordinators will be on site enforcing no smoking and no drinking rules on school property.

Sue Malone-Tucker says her boys liked to watch the Immaculata football games and the family would play together on the field as they grew up.

"We always said what's great is we live on a dead-end street, but we have access to this tremendous field and track and hill," she said, the new fencing makes the street "truly" a dead end.

Chernushenko said residents are concerned that what was effectively a school-board-owned park for neighbours has been turned over to a private enterprise.

"Their access to the field will be limited to requested times when the field isn't booked. That's unpredictable, it's limited. Will the fence be locked most of the time? It appears, yes," Chernushenko said.

Joanne Lostracco, a Glenora Street resident who has been leading opposition to the field, said while the Immaculata situation may be unique in Ottawa, commercially-operated school fields are becoming more common in Ontario.

"If it can happen here, it can happen also in your ward. So if it's going to happen throughout the city, what do we want? I think your neighbours are going to want to get some sleep," she said.

Chernushenko said he also thinks the city needs a new category of rules for for-profit redevelopment of sports fields.

"It's great for the school. It gets them a new, very durable field, but there are impacts on immediate neighbours. We need to as a council come up with a new designation for for-profit field operations," he said.

With files from Elyse Skura