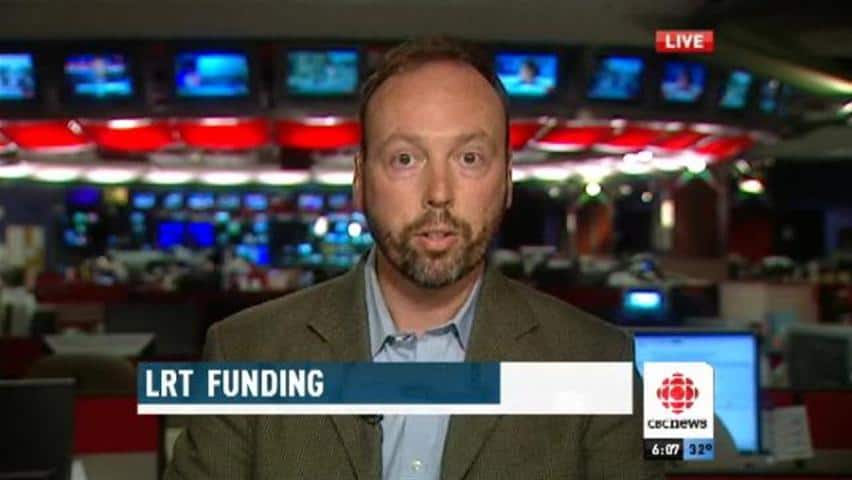 The $600 million Ontario is contributing to bring light rail transit to Ottawa may be contingent on the city's adoption of the troubled Presto smart card system, CBC News has learned.

The one-touch Presto pass was supposed to be up and running on OC Transpo buses by Canada Day, but technical issues have delayed its implementation until February 2013.

The city's frustration over the delay had some councillors openly inquiring about whether the city might be able to get out of the deal with Metrolinx, the provincial agency responsible for Presto.

However a senior source within the provincial government told CBC News the money the province is providing for the LRT is conditional on Ottawa "participating in PRESTO and, as a participant, meeting all of its PRESTO related contractual obligations, including financial obligations."

"There is a clause concerning the Presto payment system in Ottawa's Light Rail Contribution Agreement," the source said. "The City of Ottawa agreed to this clause as part of the negotiation."

The clause is not entirely set in stone, the source said.

"If the city would like this clause removed from the light rail contribution agreement at the next contract update we will work with them," the source said.

Transit commission chair Diane Deans said she hasn't spoken with Bob Chiarelli, the provincial Minister of Transportation and Infrastructure, but said her understanding is that Chiarelli has assured the city the clause won't pose a barrier to LRT funding.

"I understand that Mr. Chiarelli has made it clear that he does not see a link between the city's participation in the Presto program and receiving the $600 million for the LRT project, and frankly neither do we," said Deans.

"This is a contract penned by bureaucrats but it has to be practical, and practically speaking we're all in this boat together and frankly what we want is a Presto card that works."

"We're not trying to get out of Presto, we just need to card to work and I think that's reasonable. If at some point we need to consider our options because the Presto card doesn't work, the Minister has made it clear that he's not going to be linking LRT funding to our participation in Presto," she said.

The Presto system was to be in place Canada Day and replace the existing EcoPass system and also phase out older methods of payment like tickets.

The city promoted the Presto card as a convenient way to pay for your transit use because commuters simply tap the cards on readers to pay their fare. Users could also use a credit or debit card to load them up online or over the phone.

But testing in advance of the July 1st launch revealed technical problems, particularly in getting the card readers to recognize the "tap" of the card.

Metrolinx operates an earlier version of the technology in Toronto, but Ottawa transit commissioner Diane Deans wanted the cards to be useable as monthly and yearly passes, something the Toronto system wasn't equipped to do.

Metrolinx has promised to cover reasonable costs due to the delay.

The city delayed pay-per-ride price increases scheduled to take effect on July 1, and also moved to extend the EcoPass program for a year.

LRT slated to operational by mid-2018

The 12.5 kilometre rail line LRT project includes a 3.2-kilometre tunnel to run between LeBreton Flats and the University of Ottawa campus, with four underground stops.

The rail line is slated to be operational by mid-2018.