A large mobile crane fell on its side as it was moving a cement mixer at the site where workers are building the eastern entrance to the LRT tunnel near the University of Ottawa.

Workers on the scene but no reports of injuries, City of Ottawa says

A mobile crane operator had to hop from the cab of the machine when it fell onto its side at the eastern entrance to the LRT tunnel near the University of Ottawa Wednesday morning.

Rideau Transit Group technical director Peter Lauch said in a briefing outside the work site that the crane was lifting a small cement mixer into the tunnel when it toppled.

Incident update: Portable crane has tipped over at LRT east portal. No injuries. Emergency responders have left the scene.

Tracks designed to prevent the crane from tipping were not deployed, leading to an imbalance that caused the heavy machine to fall, said Lauch.

When the crane operator realized the machine was tipping, he followed his training and jumped out of the cab, said Lauch. He was not injured.

There were workers in the tunnel and two spotters below as per safety procedures, Lauch said, but no one was under the boom of the crane when it flipped.

There are no reports of injuries, according to the city. Paramedics were called to the scene but have since left.

Workers were nonetheless shaken and visibly upset over the incident. Workers told CBC News it was a "near miss" and said someone could have been hurt.

Shortly before the crane tipped over, four workers had exited the tunnel to go on a break and were near the spot where the cement mixer fell and the boom landed, workers told CBC. They said the boom landed close to scaffolding used to exit the tunnel.

Some workers said they didn't want to go back inside the tunnel over safety concerns.

Workers at the site were kept away from media. They told CBC News they could not talk on the record because they signed confidentiality agreements. Some of the upset workers were then taken away in a van.

Mayor Jim Watson and members of council were briefed on the incident and the Ministry of Labour has been called to the site.

"Any time there is any incident obviously it raises concerns," Watson told reporters at city hall Wednesday. "But this is a massive project. It's $2.1 billion, and we have one of the safest records … in the entire province for a project this size.

"But obviously when this vehicle, which was a crane on tracks tipped over we wanted to make sure first and foremost no one was injured and that I'm pleased to confirm is the case," he said. 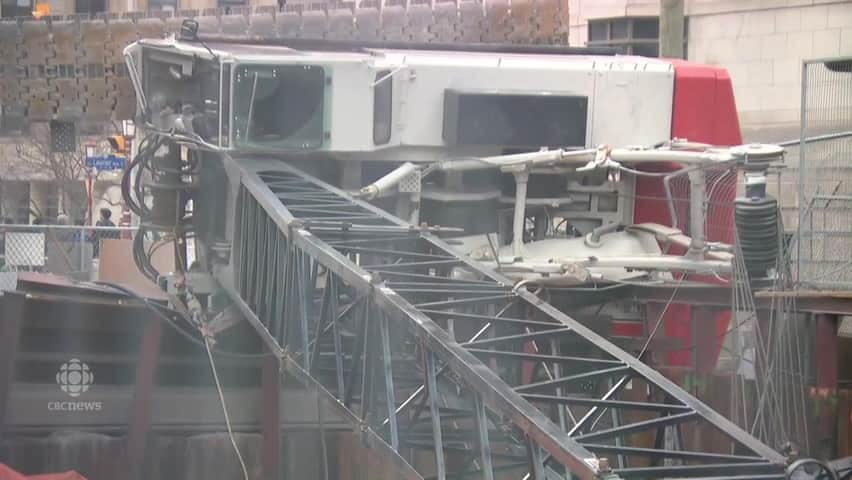 3 years ago
0:23
A look at the damage caused after a crane toppled over, dropping a cement mixer into the LRT tunnel. 0:23

John Manconi, the head of transit services at the City of Ottawa, said he, the mayor and Steve Cripps, the director of the city's rail implementation office had met with the Rideau Transit Group on Tuesday and made clear that safety was the city's number one priority and that they were not going to compromise safety to meet a timeline or deadline.

"I want to make crystal clear is that we hold all of our contractors, including RTG, to a very high standard of safety and RTG has been fully cooperative in making sure they can demonstrate to us that safety is their number one priority, which we remind them of regularly," said Manconi.

Manconi said he was unaware workers were told not to speak out about their safety concerns and suggested that was a question for Antonio Estrada, the CEO of RTG.

"Employees have rights and they are protected by law, and RTG has an obligation to meet all of those requirements," he said.

"If there's things that are not occurring that should be occurring those employees have the rights through the law."

"We're really lucky," said McKenny. "We could have had a worker killed."

McKenny said he would be meeting Thursday with Rideau Transit Group and Manconi and will try to get some assurances from RTG that "this kind of thing is not going to happen again."

Last month a worker was injured at the LRT tunnel near the intersection of Kent and Queen streets. It was the second workplace injury on the LRT project in seven days.

In the earlier incident, a worker fell while installing rebar at Parliament station on March 11.

No serious injuries were reported in that case, according to Rideau Transit Group, the consortium responsible for building Ottawa's $2.1-billion light rail line.

The worker was taken to hospital and has since returned to work.