'People are dying': Life and death at level zero

More and more frequently, Ottawa is without a single ambulance to respond to medical emergencies. It's called level zero, and paramedics, doctors and their patients are sounding the alarm.

Paramedics, doctors and patients sound the alarm about lack of ambulances in Ottawa

The 911 call had been bouncing around over the radio all night: a chemo patient had developed a fever, a dangerous situation for someone with a suppressed immune system.

Every ambulance in Ottawa was tied up with more pressing cases or waiting to drop off patients at the hospital.

It took three hours before one was finally freed up. When paramedics arrived, they found the patient septic and barely lucid, and the family frantic.

They were able to get the man to hospital, but never found out whether he survived after enduring such a long wait for the help he desperately needed.

Stories like this are becoming more common in Ottawa, where paramedics, patients and health-care workers are sounding the alarm about a lack of ambulances to respond to medical emergencies — a situation referred to as level zero.

CBC spoke to paramedics on the condition of anonymity because they fear speaking publicly would cost them their jobs.

The paramedic who responded to the cancer patient said what happened was "unconscionable," and it was that call that prompted him to speak out about how dire the situation has become.

"I don't think people realize how bad it is," he said. "It's terrifying. As somebody with family members living in our area, it's terrifying."

Level zero is nothing new, but it's occurring more frequently.

"There isn't a paramedic in the city who has to look back very far to pull out a memory for how awful delays have impacted themselves, their patients or the community," said Darryl Wilton, president of the Professional Paramedic Association of Ottawa (PPAO).

"We hear level-zero alarms every day. It's the new norm." 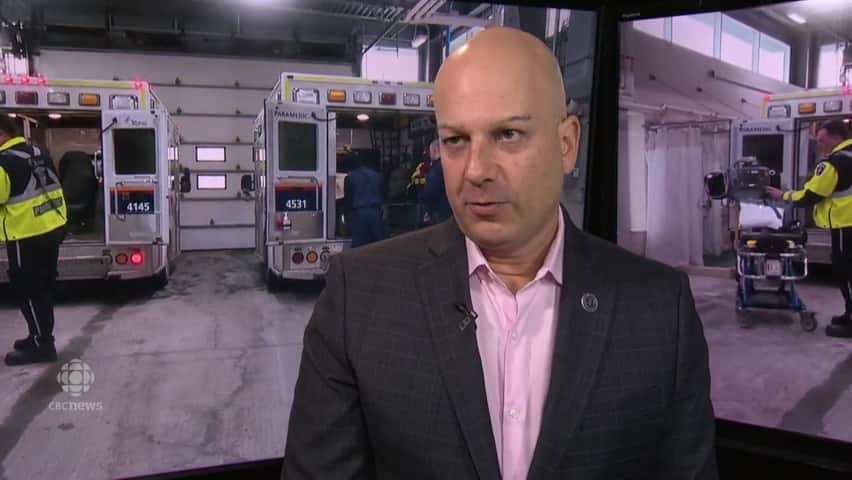 'They're at their wits end trying to keep it together'

1 year agoVideo
0:42
Darryl Wilton, president of the Ontario Paramedic Association, spoke to CBC News about what "level zero" means for patients and paramedics.  0:42

There were 329 instances of level zero in Ottawa over the first eight months of 2019. Add all those hours together, and Ottawa was at level zero for almost six days, according to data released by the city earlier this month.

"If somebody was having an anaphylactic reaction right now, if they're having an asthma attack, if they were going into cardiac arrest, if we're at level zero, then we're not available to respond immediately," Wilton said.

Paramedics describe seniors with broken bones waiting for more than an hour on the hard ground for help to arrive.

Others recall dropping off one patient and immediately rushing to an urgent call across town, only to be called down because the patient died before they could get there.

"We know the level-zero situation in Ottawa has been directly impacting patient care and comfort, but it has already most likely been deadly as well," said another paramedic.

While some paramedics question whether the service has enough staff and resources on shift, city officials place the blame squarely on Ottawa's hospitals.

A paramedic who drops off a patient at the hospital can't leave until that person has been transferred to a bed in the emergency room. But it can take hours for a bed to become available, leaving paramedics idle while 911 callers are made to wait.

'She was everything in my life'

That's what happened two years ago when Bruno Gaeckel called 911 for his 76-year-old wife, Carmen, who had chest pain and was feeling dizzy.

Paramedics took her to Queensway Carleton Hospital, where she was triaged as a high-priority case.

She waited for 5½ hours on a gurney, surrounded by three paramedics. Eventually, she was transferred to a bed, but went into cardiac arrest and died before even being seen by a doctor.

"She was everything in my life. We were very close and I miss her," said Gaeckel, who still breaks down when he speaks about her final hours.

The hospital investigated Carmen's death and identified a key problem: paramedics must stay with patients until they're officially transferred to a bed, and doctors and nurses aren't allowed to provide care or medical tests until that happens.

Meanwhile, paramedics are no longer allowed to deliver paramedic services within the walls of the hospital.

Jasmine Redenbach, the Gaeckels' daughter, said she broke down in tears the last time she had to go to a hospital emergency room and saw lines of patients on gurneys with paramedics waiting at their sides.

"It brought back so many emotions, because I thought, 'This is still going on,'" Redenbach said.

Her daughter, Brenda, called 911 earlier this month when Huber, a resident of the Perley and Rideau Veterans' Health Centre, started showing signs of delirium.

At the hospital, Huber waited on a gurney for 5½ hours with paramedics by her side the entire time. They were unable to treat her in the hospital, but also couldn't leave her. The emergency room was full of paramedics in the same predicament.

Huber said hospital staff did their best, but there was no bed for her.

"I was frightened," she said.

"Enough is enough," Di Monte said at a city committee meeting last week. "I can't resolve their issues, but they are impacting the public safety and public health of the community."

But emergency room doctors say the overcrowded ERs are a symptom, and they'd prefer to treat the cause.

"Emerge really is the canary in the coal mine," said Dr. Andrew Willmore, an emergency room doctor and medical director of emergency management at The Ottawa Hospital.

He said the reasons for the ER backlog often lie elsewhere in the hospital. For example, some patients who are ready to be released into long-term care remain in a hospital bed simply because there's nowhere else for them to go. That means another patient who's ready to be admitted to a ward has to stay in an ER bed, making that bed unavailable to a patient who's waiting on a gurney in the corridor, surrounded by paramedics who can't do any more to help them.

Nor can they leave to respond to other emergencies.

The source of the overcrowding might change from one day to the next, but the effect is always the same, Willmore said.

"When we come to work as emergency physicians in an overcrowded emergency department, the tension is palpable," he said.

"The desire to clear that backlog is manifest in the fact that staff are working really hard to try to bridge that gap. But you know, the challenge is that individual contributions are not enough. It has to be a system fix."

"It's just soul-destroying. It goes against every reason you've come to work that day," Ovens said.

Paramedics are feeling the strain, too.

"Paramedics go into work and they feel despair. And we feel it for our patients," Wilton said.

Both Ontario's Ministry of Health and the Ottawa Hospital issued statements in response to CBC's recent stories about the level-zero dilemma. Both promised work with their municipal and community partners to find ways to mitigate the absence of available ambulances.

But to the paramedic who witnesses the crisis every day, it doesn't matter who's at fault, or what the solution ultimately is: it just needs to come soon, before someone else dies unnecessarily.

"We all have to do something to fix this now, because people are dying," the paramedic said.