Property owners in eastern Ontario are calling on their local and provincial governments for help handling an invasion of gypsy moth caterpillars.

Destructive gypsy moth larvae can defoliate a tree in days

Property owners in eastern Ontario are calling on their local and provincial governments for help handling an invasion of gypsy moth caterpillars.

The red-and-blue-speckled caterpillars are an invasive species that can completely defoliate a tree, causing long-term damage.

In the Otty Lake area of Tay Valley Township, about 90 kilometres southwest of Ottawa, the fuzzy caterpillars arrived in June and began munching the oaks and basswoods on Dan Woods's two-hectare property.

"We came here because of the trees. The trees drew us," said the retired military engineer, who moved to the area with Tineke Doornbosch in 2004.

My biggest surprise is that nobody in the province and nobody in the township has been willing to step forward and acknowledge that, yes, this is indeed a problem.- Dan Woods, landowner

The caterpillars quickly stripped those deciduous trees, then moved into several century-old white pines that dot the mature forest around the couple's home.

"It's been difficult to look around and see the devastation that's happened," Woods said. "One month ago this was a pristine forest area."

He contacted the township, but said he was told there was no budget for spraying bio-pesticides like Bacillus thuringiensis, or BTK, on private property.

Woods tried removing the four-centimetre, tan-coloured egg masses from the tree trunks himself. When the caterpillars appeared anyway, he wrapped the tree trunks with burlap skirts to keep the larvae from reaching the canopy, with limited success.

"My biggest surprise is that nobody in the province and nobody in the township has been willing to step forward and acknowledge that, yes, this is indeed a problem," he said. 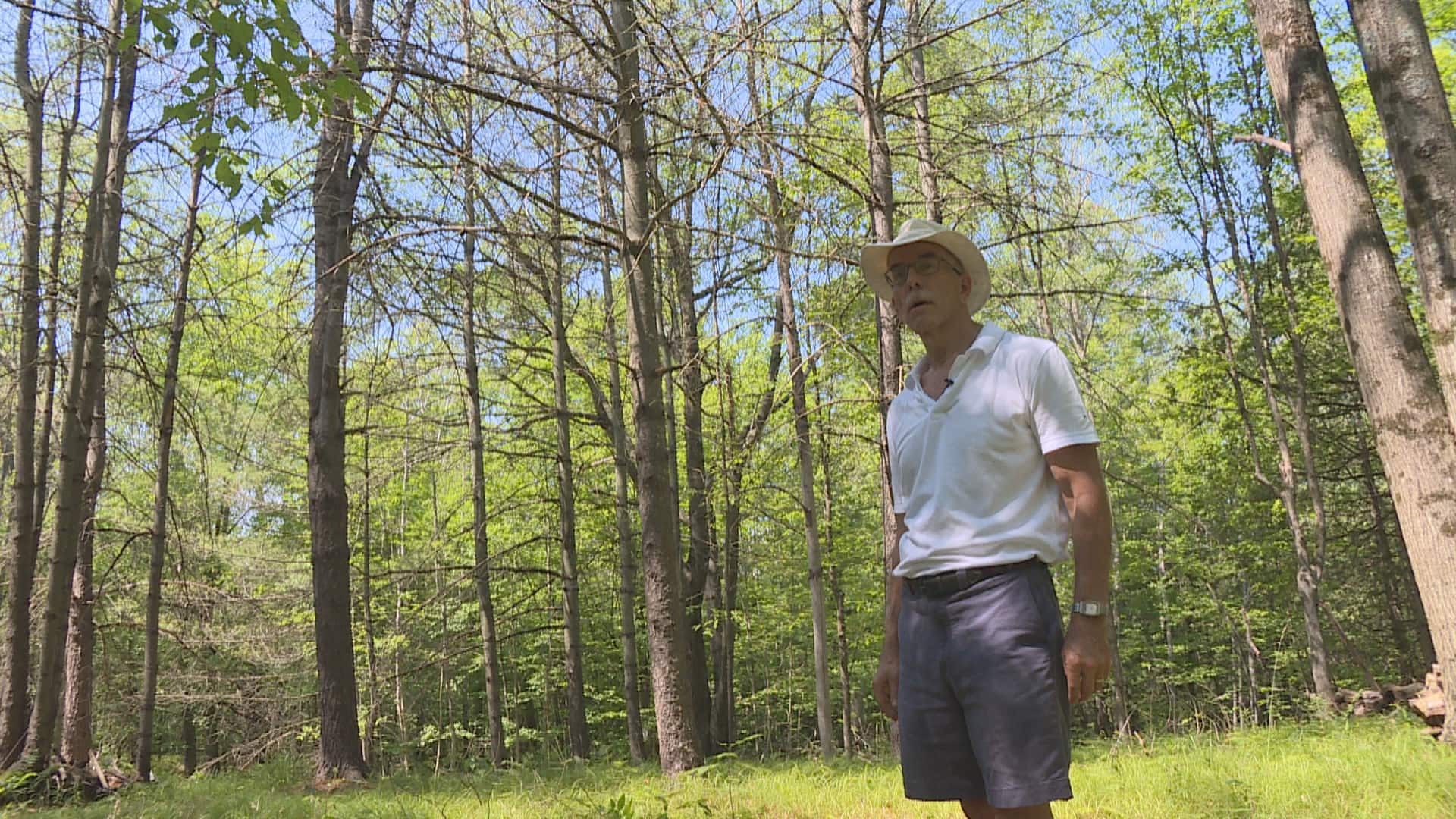 4 months ago
1:09
Dan Woods, who owns a home in Tay Valley township south of Ottawa, shows the damage gypsy moths have caused to trees on his property. 1:09

Many trees in the area were destroyed by a violent microburst in 2012, and Willis said she's worried for the few mature trees that remain.

Dan Rowlinson, the Ministry of Natural Resources and Forestry's provincial coordinator for the forest health monitoring program, said the infestation did increase last year to an area of 47,000 hectares — a "considerable expansion," he said.

The ministry is monitoring an area near Frontenac Provincial Park where the insects have stripped both hardwood and softwood trees. In the weeks ahead, the ministry will take to the skies to conduct aerial surveys in order to map the 2020 damage.

But Rowlinson said he suspects property owners, many working from home during the COVID-19 pandemic, are just more keenly attuned to the health of their trees this year. And, he said in the case of deciduous trees, all hope is not lost.

"A defoliated tree is not a dead tree," he said.

The problem isn't isolated to rural and remote areas.

Touring through Richelieu Park and Vanier's historic urban sugar bush, Jason Pollard, a forester with the City of Ottawa, was able to point out gypsy moth caterpillars on many oak and beech trees.

Pollard said that while the caterpillars are here, the city isn't declaring an outbreak just yet. The forestry department is nevertheless monitoring the situation elsewhere in eastern Ontario, especially along the Highway 7 corridor.

"Those may be indications that there is a broader outbreak happening," he said. 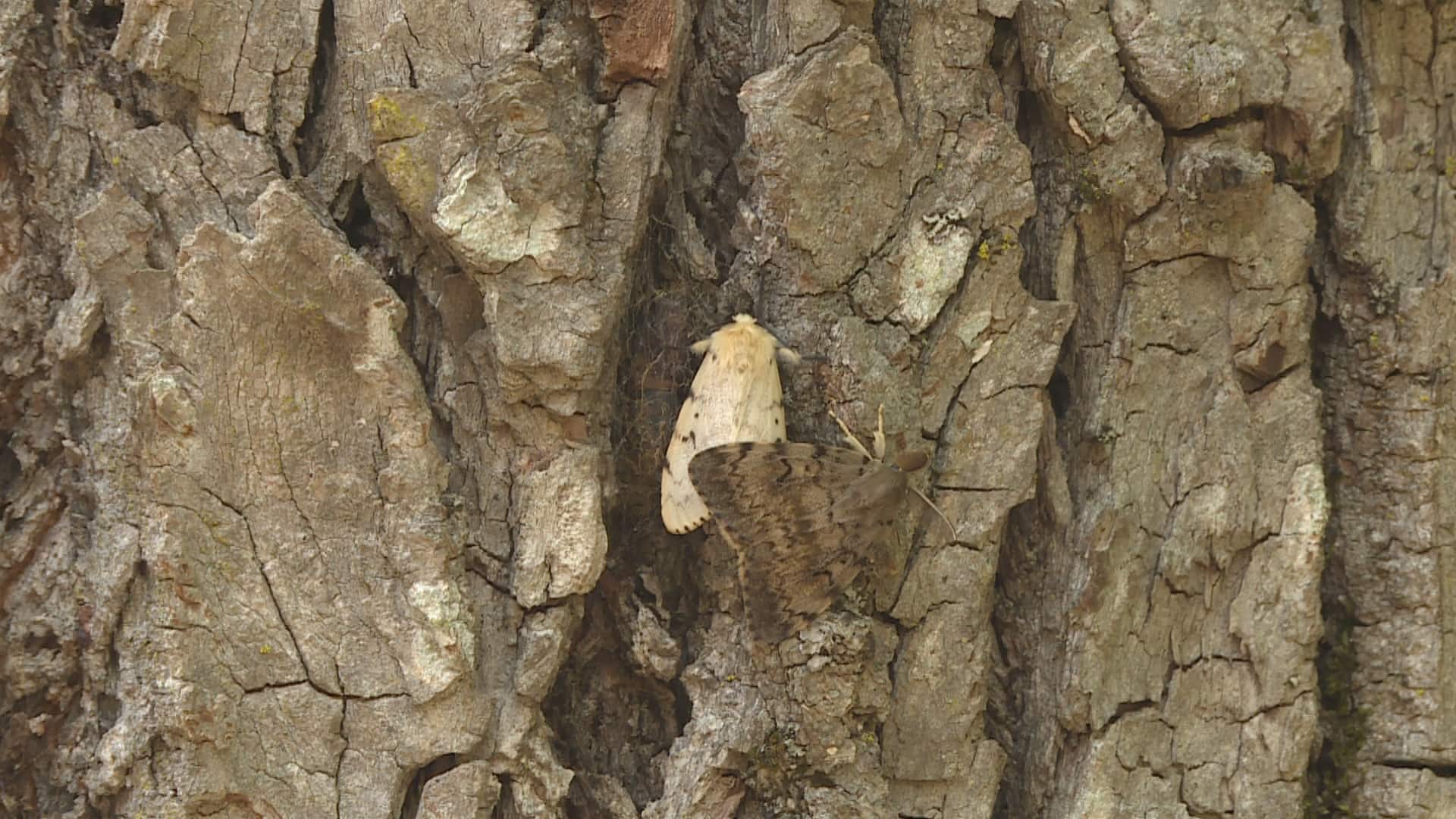 What you can do to protect trees from gypsy moth caterpillars

4 months ago
1:20
Jason Pollard, a forester with the City of Ottawa, explains what homeowners can do to prevent damage by gypsy moths. 1:20

Other Ontario cities are taking action: London has removed egg masses from 5,000 trees, and Hamilton sprays bio-pesticides to keep the larvae in check.

In the Niagara region, Trees Unlimited forester Paul Robertson said a coordinated effort is needed on both public and private property if the destructive march of the gypsy moth caterpillar is to be halted.

"It's almost impossible to convince a landowner to spray if they haven't had an infestation," he said.

But after an infestation in 2018 stripped about 14,000 hectares of mostly oak forest in that region, many landowners responded the following year by taking part in a region-wide spraying program.

Dan Woods said he wishes there was the same urgency from authorities in eastern Ontario.

"It's too bad that they're not willing to acknowledge that a problem on my property can and will very, very quickly become a problem on public property and Crown land," he said.