Thirteen people made it safely out of a multi-unit building in Ottawa's Vanier neighbourhood after fire broke out in one of the apartments overnight.

Investigators have ruled out arson 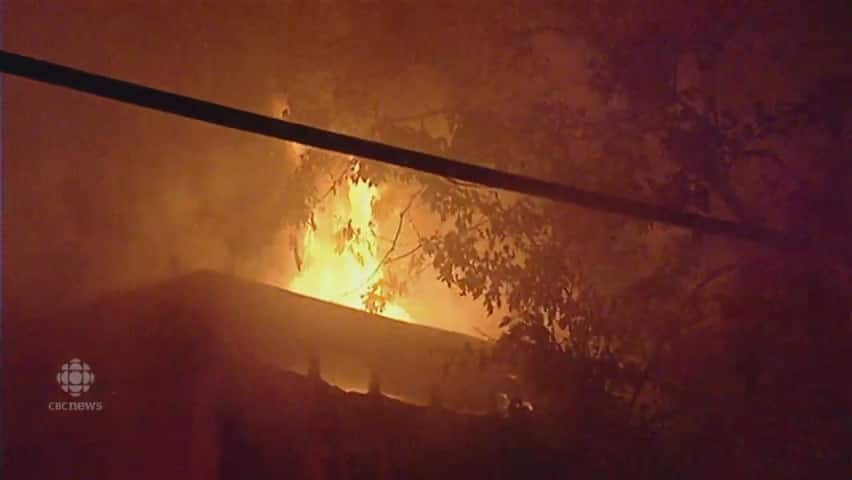 Thirteen people made it safely out of a multi-unit building in Ottawa's Vanier neighbourhood after fire broke out in one of the apartments overnight.

Several people called 911 just before 2 a.m. Wednesday to report flames coming from the front of a two-storey residential building at 292 Lajoie St., firefighters said in a media release.

All 13 people who were inside at the time, including several teenagers, managed to make it out safely.

Among them was Jacqueline Freeman, who moved into her apartment just four days earlier.

"I heard my boyfriend screaming frantically that the apartment next door was on fire," said Freeman. "When I did finally get up and look out the back door, there was a ton of smoke coming out."

Freeman and her boyfriend managed to escape the fire without being injured.

One of the residents was assessed and treated at the scene for minor smoke inhalation, paramedics said.

Eight tenants were displaced by the fire, firefighters said.

The Salvation Army was on scene to assist the tenants and provide them with shelter for up to 72 hours following the fire.

13 people forced out at 2am on Lajoie Street in Vanier, as fire hit this house that holds 6 apartments <a href="https://t.co/PbxZj8upAm">pic.twitter.com/PbxZj8upAm</a>

While the cause of the fire remains under investigation, Ottawa Fire Services said Wednesday afternoon investigators have ruled out the possibility that the fire was caused by arson.

Lajoie Street was closed between Montreal Road and Levis Avenue but has since reopened.

Damage was estimated at about $375,000, firefighters said.

A 2nd Alarm has been transmitted for the fire on Lajoie St. All searches are negative and no injuries have been reported. <a href="https://t.co/e7Qisqf5Pc">pic.twitter.com/e7Qisqf5Pc</a>