The Calabogie Peaks ski resort is playing host to a group of Canadian soldiers working to keep physical while they recover from serious injuries. 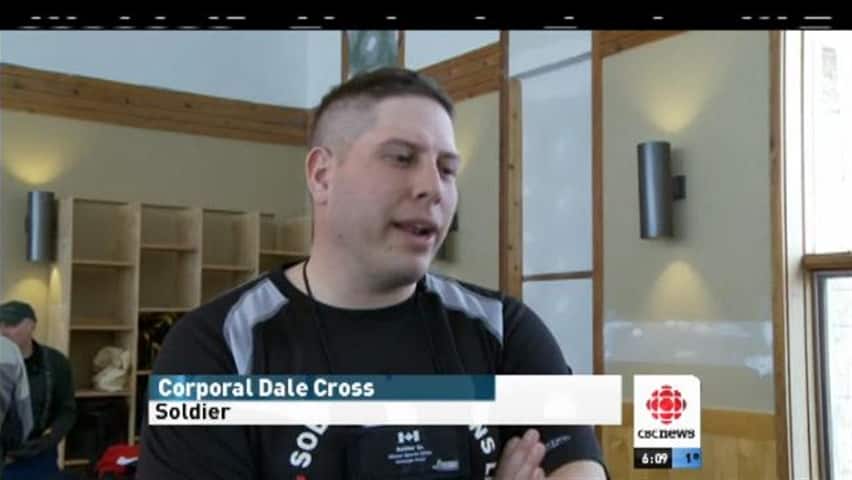 The Calabogie Peaks ski resort is playing host this week to a group of Canadian soldiers working to keep physical while they recover from serious injuries.

Corporal Dale Cross, from Smiths Falls, Ont., lost his left foot and part of his left leg 18 months ago after he stepped on an explosive device in Afghanistan.

He said he handled it better than those providing him care.

"It didn't bother me," said Cross. "I was quite happy to be laying there alive because I got a wife and kids."

On Wednesday, Cross was one of 10 soldiers participating in the Canadian Force's Soldier On ski program, which aims to help injured military personnel stay active and healthy.

As part of the program, Cross tried out the sit ski, a device that allows people with some physical disabilities to enjoy the sport. And he confused hill staff when, during a run, the call went out to retrieve a ski, a boot and a leg — after his prosthesis slipped off while he was riding on the chair.

"I've lost a leg on the hill, so how much fun is that," said Cross. "It was a good laugh for everybody."

General Walter Natynczyk, the Chief of Defence Staff, said the program is an opportunity for the soldiers to regain a sense of confidence.

"As someone just said it's great to feel the wind whistling by again," said Natynczyk. "I just got goose bumps saying that right now, but the fact is it's a way of ensuring they gain their independence again."

The Soldier On program relies on dedicated volunteers, outside fundraising and corporate donations. A foundation called True Patriot Love is also a key supporter that raises money for members of the military and their families.

Soldier On ski-events are also being held in both Quebec and British Columbia.