Canadian immigration officials have refused to allow Taufiqul and Farida Arif to join their son and grandchildren in Ottawa. The reason? The grandfather's role in Bangladesh's 1971 independence movement, a fight now widely regarded as just.

For a decade, Faisal Arif has relentlessly pursued one goal — to bring his aging parents from Bangladesh to Ottawa, where he lives with his wife and two children.

"I want my parents close to me," said Arif, a Canadian citizen. "My kids are born here and they love their grandparents."

My father stood up for what was right.- Faisal Arif

Arif, a policy analyst with the federal government, first applied to sponsor his parents in 2007. He's still waiting, thanks to a section of the Immigration and Refugee Protection Act that forbids his 65-year-old father from setting foot in Canada.

Whether that's justified is very much a matter of perspective: while Taufiqul Arif is regarded as a hero and humanitarian in his homeland, Canada has labelled the elder Arif a security threat.

Taufiqul Arif and his wife, Farida, have spent most of their professional lives working as consultants with the United Nations, the World Health Organization and other aid agencies.

With master's degrees in economics and engineering, Taufiqul has helped develop safe drinking water systems in rural villages. Farida has worked with Bengali women to secure micro loans, and has represented Bangladesh at the United Nations.

Despite these credentials, the couple has been denied entry into Canada. 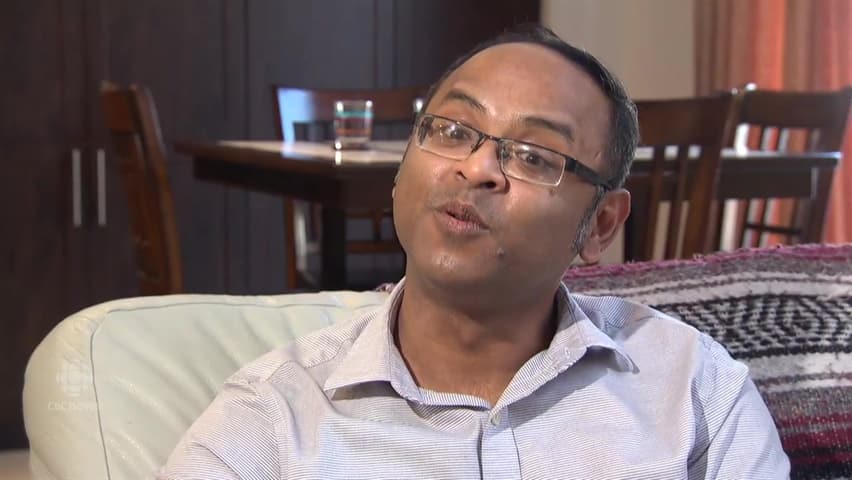 Grandfather's immigration bid hindered by past

3 years agoVideo
1:07
Canadian immigration officials have refused to allow Taufiqul and Farida Arif to join their son and grandchildren in Ottawa. The reason? The grandfather's role in Bangladesh's 1971 independence movement, a fight now widely regarded as just. 1:07

According to documents Faisal Arif obtained through access to information, his father's history with the Bangladeshi independence movement in 1971 is the reason the couple has been flagged by the Canada Border Services Agency (CBSA).

As a 19-year-old student leader, Taufiqul Arif joined the Bengali revolt against the Pakistani military, which was engaging in crimes against humanity in what was then the region of East Pakistan.

"My father stood up for what was right," said Faisal. "The [Bangladeshi] government called up its own people to come and join the liberation force, and my father did that."

In his initial interview with a Canadian immigration agent in November 2014, Taufiqul called himself  a "freedom fighter" and openly admitted to teaching villagers how to use small arms to participate in "light guerilla warfare."

So proud was he of his role, he even produced a certificate of valour he received from the nascent Bangladeshi government after independence.

It's that admission about events that occurred 46 years ago that seems to be thwarting the couple's attempts to make Canada their new home.

No proof of war crimes

"There is no indication of him personally committing any war crimes or crimes against humanity," said Toronto immigration lawyer Joel Sandaluk, who was asked by CBC to review the 300 pages of documents linked to Taufiqul Arif's case.

Sandaluk said it appears Canadian immigration officials only looked at the retired engineer's activities during the nine-month liberation war, and ignored the 30-plus years of development and humanitarian work Taufiqul pursued after Bangladesh gained independence.

"I hope the government would be able to recognize that this person's admission to Canada isn't contrary to the national interest, and if anything, it would enrich the Bangladeshi community living [in Ottawa]."

Under Section 34 of the Immigration and Refugee Protection Act, an applicant can be denied entry to Canada "for engaging in or instigating the subversion by force of any government."

But some immigration lawyers believe that provision is at times applied too broadly.

Mandela would have been barred, too

Jamie Liew, an associate professor of immigration law at the University of Ottawa, said even participation in a peaceful protest or a non-violent act of civil disobedience could be interpreted as subverting a government.

Nor does the law distinguish between a democracy and dictatorship, an omission that can entrap activists or revolutionaries who later turn out to have been on the right side of history.

"A perfect example is Nelson Mandela. He is an honorary Canadian Citizen, but under any other circumstance, if he were to apply to Canada under this provision, he would be found inadmissible," said Liew.

In documents related to Taufiqul Arif's case, CBSA screeners noted that there were reasonable grounds to believe he "engages, has engaged or will engage in acts of subversion."

In the files, officials quoted one BBC report about "alleged atrocities" committed by Bengali separatists, and concluded it's possible the engineer took part in revenge killings.

In an attempt to address those concerns, Taufiqul Arif has submitted police security checks from other countries where he has lived and worked, including Malaysia and Thailand.

When your people are attacked, butchered and raped, and you defend yourself and your family with arms, is that a crime?- Rezaur Rahman, immigration lawyer

That wasn't enough to convince Canadian immigration officials that he wouldn't pose a security threat. In February 2016 Taufiqul — and by extension Farida — were ruled inadmissible to Canada, meaning they could not appeal to the Immigration and Refugee Board.

Instead, their son has had to hire a lawyer to argue his father's case before the Federal Court of Canada.

Ottawa immigration lawyer Rezaur Rahman took on the case, but was denied a hearing.

Adding to the injustice, Rahman said, is that Canada was one of the first countries to recognize Bangladesh's independence from Pakistan in 1972, under then prime minister Pierre Trudeau.

"If you are for democracy and for humanity, you must fight for your cause.... When your people are attacked, butchered and raped, and you defend yourself and your family with arms, is that a crime?"

After being denied a federal court hearing, Faisal Arif contacted his local member of Parliament, Pierre Poilievre. The Conservative MP has written a letter vouching for Faisal's character, and for his ability to support his parents.

Immigration Minister Ahmed Hussen told CBC that while he can't discuss specific cases for reasons of privacy, admissibility decisions are made by "highly-trained and experienced CBSA officers."

The only option left now is to seek an exemption from the minister of public safety, which would remove the security risk label from the couple's application.

Since December 2012, CBSA has received 80 applications for what the agency calls "ministerial relief." During that same period, relief was granted in only 9 cases.

After 10 years, Faisal Arif said the lengthy process has plunged him into depression. Even if his parents are granted an exemption by the minister, they will still have to re-apply to immigrate to Canada. There are no guarantees they'll be accepted.

"I know the procedures, I have followed the rules that need to be followed and I'll keep doing it because I believe in my government. I believe in being hopeful, because hope is all I have," Arif said.
1 of 0