The Newport Restaurant, home to Ottawa's "Elvis Sighting Society" and a popular spot for brunch or pizza for a quarter-century, is downsizing and moving down the road. 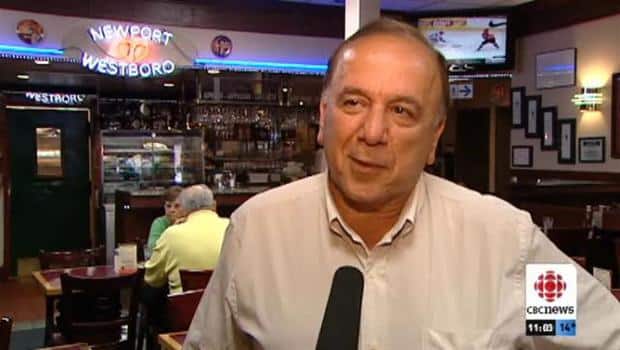 8 years ago
1:46
A Westboro staple is moving due to increased costs including rising rent. 1:46

The Newport Restaurant, home to Ottawa's "Elvis Sighting Society" and a popular spot for brunch or pizza for a quarter-century, is downsizing and moving down the road.

Moe Attalah, the Newport's owner, said he is going to lease his current location at Churchill Avenue and Richmond Road to the owners of the Empire Grill restaurant.

The Newport will move in January to a smaller location at Churchill and Scott Street, replacing Attalah's other restaurant, Donna's.

For regulars of the restaurant the move, however small, was another sign of the changing neighbourhood of Westboro, particularly along Richmond.

Blair Ferguson's family has run BF Vacuum Cleaner Centre a block west of the Newport since 1966. He said gets calls once a week from developers, offering to buy his property.

Ferguson said the influx of people has increased land values, which in turn, drives out small business. He said the opening of the Mountain Equipment Co-Op in 2000 was the first sign of the changes in the neighbourhood.

"My leases are low comparatively speaking to what they're trying to get now. That's why a lot of them are moving out, they're charging ridiculous money for the places," he said.

Gordie Gravelle sold his car dealership property to condo developers six years ago. Sitting at the Newport Tuesday morning, he said "It's time to move on and let the young guys take over."

Gravelle said the corner won't be the same without the restaurant.

"I will miss it and Moe. Moe always comes in and has a cup of coffee with us. It's sad. He's not the owner, he's our buddy. But it's tough to get a free breakfast from him."

Breakfast at the Newport has also been a tradition for Don Armstrong, who was born in Westboro.

"If you ever want to meet anyone in Westboro, come in here and you'll meet them. That's for sure," said Armstrong.