​Sticks were set outside, flags flew at half-mast and students prepared to don their hockey jerseys Thursday as institutions and everyday people looked for ways to honour the junior hockey team.

People across Ottawa are leaving out hockey sticks, lowering flags and pulling on hockey jerseys to pay tribute to the Humboldt Broncos.

At Ottawa City Hall Wednesday, flags were at half-mast to honour the 16 players and staff killed when the junior hockey team's charter bus collided with a semi-trailer at an intersection northeast of Saskatoon on Friday. The city was also paying tribute to Jonathan Pitre, a local boy who died after a long and inspirational battle with a rare skin disease.

Before council observed a moment of silence, Mayor Jim Watson said that prior to the fatal bus crash, Broncos goalie Parker Tobin retweeted a statement of support from hockey broadcaster James Duthie to the Pitre family.

"The hockey community," Watson noted, "has always rallied around players and fans alike." 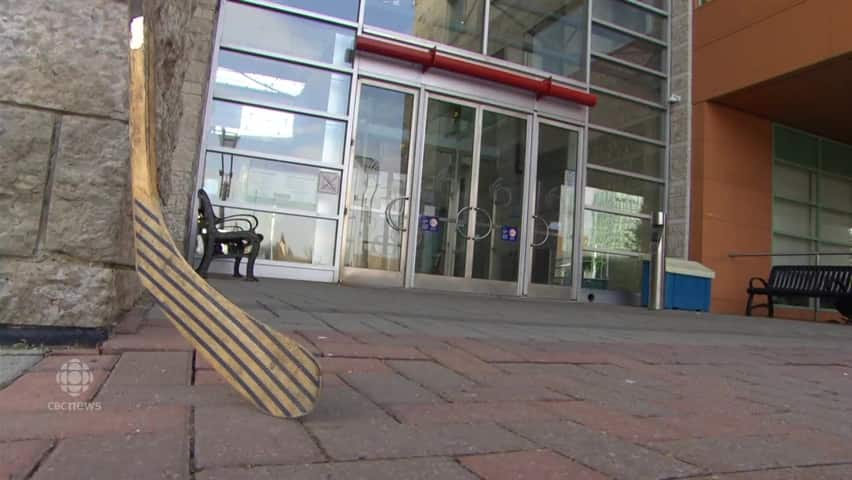 3 years ago
1:01
At City Hall, Mayor Jim Watson recognized the support of hockey fans across Canada for both Humboldt and the family of Jonathan Pitre. 1:01

Flags were also lowered to half-mast on Parliament Hill Monday to honour the victims of the Humboldt Broncos crash. They will remain lowered until sunset on April 21.

A hockey stick was also set outside City Hall, part of a movement to honour the victims of the crash. People have been leaving their sticks outside for the deceased players and staff across the country.

The Ottawa Senators, who honoured Pitre last week, also noted in a Twitter post they were leaving 15 sticks outside a team office for the victims.

"Our thoughts remain with the @HumboldtBroncos. Leaving these here in case you need them," the team wrote.

People across Ottawa also left their hockey sticks and gear outside and posted similar images across social media.

Many schools across the country and in Ottawa are inviting students on Thursday to wear a hockey jersey or similar attire to show their support for the fallen team.