Two homes have been evacuated, nearly a dozen flooded and 24,500 residences are under a boil-water advisory following a major water main break on boulevard Alexandre-Taché in Gatineau Monday evening.

Thousands of residents under boil-water advisory until further notice

Two homes have been evacuated, nearly a dozen flooded and 24,500 residences are under a boil-water advisory following  a major water main break on boulevard Alexandre-Taché in Gatineau Monday evening.

Several schools have also been closed due to the rupture. In an update Tuesday afternoon, the Commission scolaire des portages-de-l'Outaouais said all its schools and other facilities will reopen Wednesday, and bottled water will be available at all CSPO institutions affected by the water advisory.

Emergency crews were called to the busy downtown street around 6:15 p.m., just as the evening rush hour was winding down.

The rupture on the 90-centimetre pipe sent water spewing onto the street and caused widespread water pressure issues.

During an update Tuesday morning, Gatineau mayor Maxime Pedneaud-Jobin said two homes were evacuated and 11 were flooded because of the water main break.

Pedneaud-Jobin said the city will test drinking water frequently until it's ruled safe to lift the boil-water order.

"We've isolated the problem so all citizens have access to water as we speak, but we don't know what caused the problem," said Pedneaud-Jobin.

"We'll know in the coming hours, and after that we'll be able to evaluate how long it's going to take to do the repairs."

He said the water main should be fixed by Friday at the latest.

While the cause of this rupture isn't known, Pedneaud-Jobin noted Gatineau's aging infrastructure. 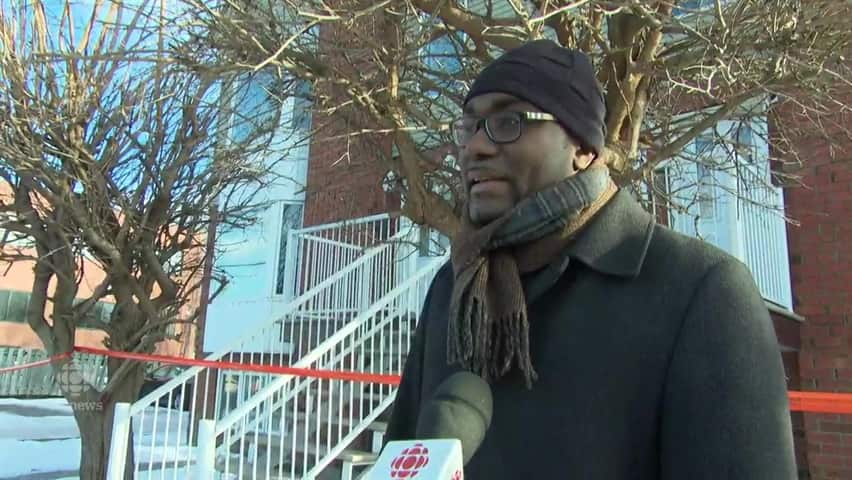 2 years ago
0:36
Tanguy Etoga has tenants in the area of Monday night's water main break in Gatineau. 0:36

The city offered the boil-water advisory Tuesday morning, asking residents in the affected area to boil water for at least a minute before consuming it.

The advisory and pipe rupture caused grief for nearby restaurant owner Tri Tran, who had to close his business Monday night after water gushed into the street.

"It's very hard to get into my restaurant for sure," said Tran, who had to cancel a reservation due to the situation.

"Especially in the Christmas season, there's a lot of lunch reservations," he said. "It's going to hurt my business for sure."

Environment and Climate Change Canada had closed its offices in the Fontaine Building and Place Vincent Massey because of the water issues, but reopened them at about 9:40 a.m.

UPDATE: A boil-water notice is in effect for GC buildings in the Hull area. PSPC employees: buildings are open, expect traffic delays and road closures in the affected area, detours are in place.

The Université du Québec en Outaouais is open, with drinking water provided by the school.

People are asked to avoid the area if they can.

The schools and other facilities closed Tuesday are:

with files from Krystalle Ramlakhan