Hudak back-pedals after saying no to Ottawa LRT Phase 2

Progressive Conservative leader Tim Hudak said the province "can't afford" to commit $1 billion for the next phase of Ottawa's light rail transit during a campaign stop in the capital on Thursday. 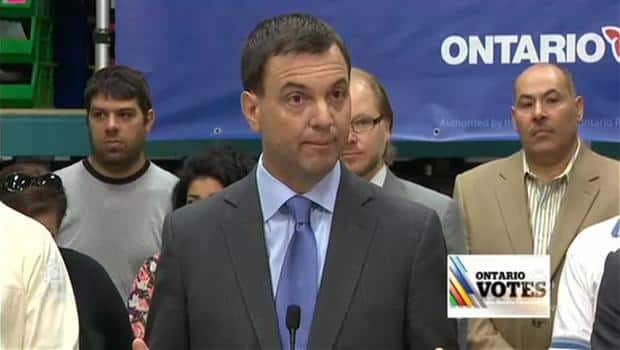 Progressive Conservative leader Tim Hudak said the province "can't afford" to commit $1 billion for the next phase of Ottawa's light rail transit during a campaign stop in the capital on Thursday.

"No. We can't afford it. Look, we'll continue with the funding that's been discussed and is budgeted for the first phase," he said.

"Some have tried to misrepresent my consistent position on Phase 2 of the Ottawa LRT. First priority is balancing the budget," he tweeted. "Only after the budget is balanced can we afford infrastructure investment like the Ottawa LRT. I look forward to a detailed proposal."

All the parties have agreed to fund the first phase of Ottawa's LRT project. The next phase — expansion east to Orleans, west to Bayshore and south to Riverside South — would require $1 billion from the province between 2018 to 2023.

Mayor Jim Watson said he was "disappointed" in Hudak's position on the LRT project.

"I don't know what the outcome of the election will be but I'm obviously disappointed that Mr. Hudak has shut the door on funding for LRT," he said.

"We know LRT in Ottawa is a priority, which is why balancing our budget is so important. Phase 2 funding is possible with a balanced budget," she tweeted. Hours later, Hudak tweeted a similar message.

​PC candidate for Ottawa West-Nepean Randall Denley also affirmed his support for transit Thursday, on the same day as an all-candidates debate in his hotly-contested riding.

"I've been very clear, our party has been very clear: we support transit. I support our LRT extension. And nothing Tim Hudak said today [Thursday] is changing that," he said.