A graphic designer who helped design the Ottawa Senators heritage jersey is reaching back into Canada's military history in hopes of helping craft the name and logo of Ottawa's next Canadian Football League team. 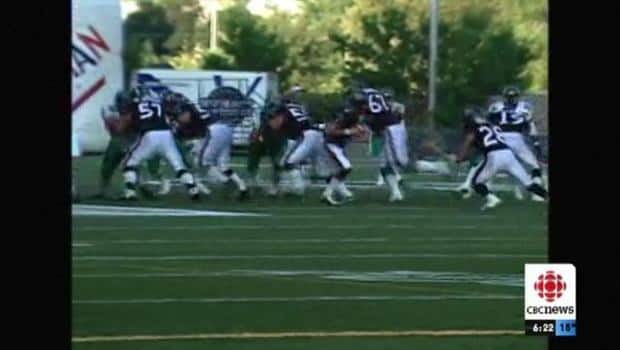 8 years agoVideo
2:07
There are new logos and name suggestions popping up for a new Ottawa CFL team? 2:07

A graphic designer who helped design the Ottawa Senators heritage jersey is reaching back into Canada's military history in hopes of helping craft the name and logo of Ottawa's next Canadian Football League team.

Jacob Barrette is proposing the city's latest CFL franchise, set to hit the field in 2014, be named the Ottawa Highlanders.

The name is in homage to the Cameron Highlanders, a reserve infantry with the Canadian Forces based in Ottawa during the Second World War and the first Canadians to storm the beaches of Normandy.

"You hear that reference a lot … we'll go to war for each other, lets just do it together. So it's something that ties so well. But for this, not only sports and football, but the City of Ottawa and specifically Lansdowne," said Barrette.

The Cameron Highlanders were stationed at Lansdowne Park before they left for the war and they helped clean out lockers and support the games.

"I think it's an outstanding idea. I think the history between the regiment and the City of Ottawa and Lansdowne would just be outstanding," said Kelly.

Barrette launched a campaign to help get the team to consider the name and he has also created logos to go along with the pitch.

He had begun a similar online campaign when the Senators were looking to come up with a heritage jersey and the team eventually brought him in to help with the design.

Ottawa Sports and Entertainment group chair, Jeff Hunt, said the team has received a hundred ideas for names, most trying to preserve the legendary 'R' that once adorned the helmets of the Ottawa Rough Riders — the longtime franchise that folded in 1996.

"We've heard names like River Rats, Raftsman … there seems to be a focus on tying into Ottawa's history," said Hunt.

He added, while he's open to making links to Ottawa's original franchise, he wants the team to move in its own direction.

"I think we've really got to find a name that connects with a younger audience as well, that's relevant to them. That's not to say a name that ties into Ottawa's history wouldn't … but I think there's many objectives," said Hunt.

The official campaign to name Ottawa's new CFL team is expected to kick off in mid-November.