The Canada Science and Technology Museum has a tiny piece of history tied to one of humanity's deadliest plagues, and for over a decade curators didn't even know it was there.

This is part of our series Hidden Treasures, where we delve into the storage rooms of museums across the National Capital Region to find out what weird and wonderful things they have tucked away there. We'll post a new story every Wednesday throughout the summer, and you can find them all on the CBC Ottawa website.

The Canada Science and Technology Museum has a tiny piece of history tied to one of humanity's deadliest plagues, and for over a decade curators didn't even know it was there.

Deep inside the museum's archives is a small vial of the vaccine used to combat Spanish flu, the devastating illness that killed at least 40 million people worldwide in 1918-19, including as many as 50,000 Canadians.

The vaccine in the museum's archives was a medical breakthrough at the time, and is the last known sample. 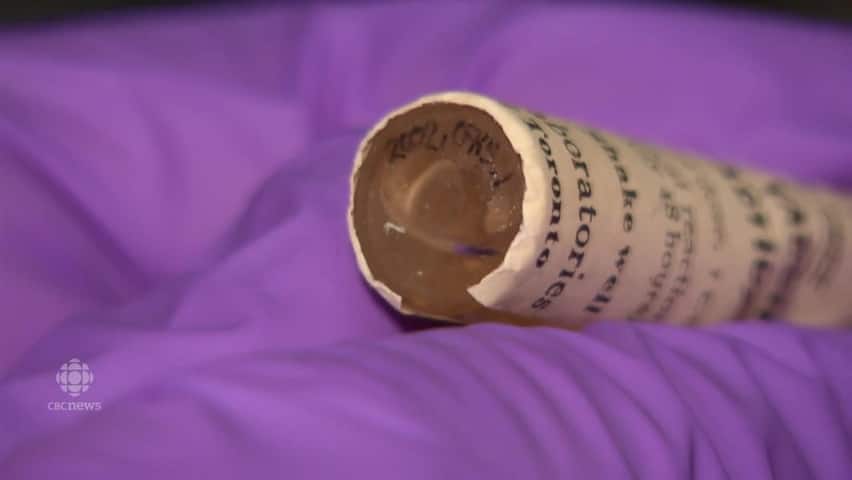 3 years ago
2:01
The Canada Science and Technology Museum's unopened vial of the original vaccine used to treat Spanish Flu in 1918 is the only surviving vial in the world, according to curator David Pantalony. 2:01

"This vial first went to the Academy of Medicine in Toronto in the 1930s probably, and then we took that collection in the 2000s," said David Pantalony, the museum's curator of physical sciences and medicine.

Pantalony said when the museum received the collection it catalogued everything in its online database, but it was an outside researcher who discovered the vial and explained its importance.

"This is the joy of a collection like this — you do find treasures you might not even know are there," Pantalony said.

While it might seem like the vaccine should be kept deep in a secret government lab, Pantalony said it wasn't terribly effective against the deadly outbreak, so it doesn't hold any real medical research value now.

"It is not powerful in terms of being a vaccine, but it is very powerful historically."

The vaccine was produced at Connaught Labs in Toronto, then a state-of-the-art facility that would go on to pioneer the large scale production of insulin.

Pantalony said the lab's work remains an important part of the history of Canadian medical research, even though the vaccine was ultimately unsuccessful.

"It does show the best try or the attempt, but at the same time the helplessness in the face of a very powerful and devastating epidemic."