The latest attempt at designing a major addition to Ottawa's historic Château Laurier is "the most disgraceful act of heritage vandalism of our generation," according to preservation advocacy group Heritage Ottawa.

The latest attempt at designing a major addition to Ottawa's historic Château Laurier is "the most disgraceful act of heritage vandalism of our generation," according to preservation advocacy group Heritage Ottawa.

The architects behind the modernist design were widely criticized for their three previous attempts, the first of which was released in September 2016. The latest version, released last week, is no better, according to the group.

"It's still basically a box that doesn't embrace the theme of the Château Laurier itself or the significance of its setting," said Leslie Maitland, co-chair of Heritage Ottawa.

Architects added limestone "fins" and lowered the addition to improve sight lines to the hotel's original features, but Maitland said the design still fails to complement either the picturesque setting or the historic building. 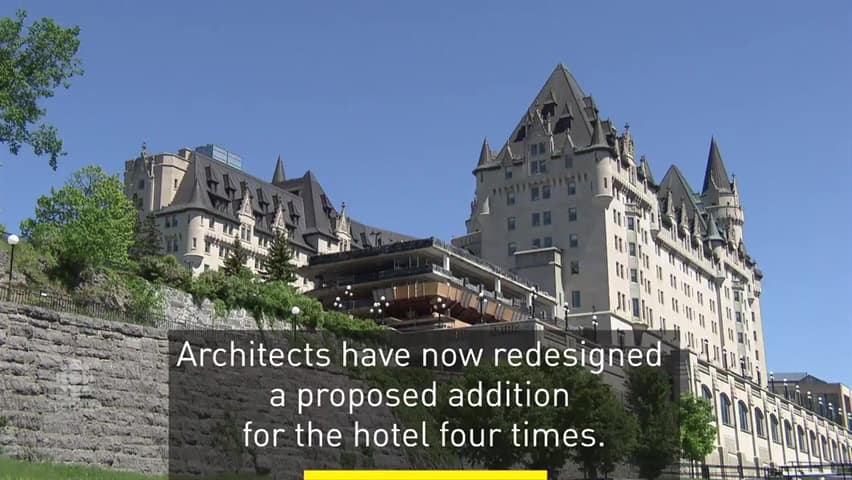 Look back at all four of the Château Laurier redesigns

3 years agoVideo
1:30
Look back at all four of the Château Laurier redesigns 1:30

She said the aim isn't to replicate the original structure, but to build something that blends in better with its castle-like design.

"We're not trying to do Walt Disney here," she said.

She pointed to the nearby Lord Elgin Hotel, which underwent renovations in the 1990s and 2000s, including modern additions with different stone tones, but which Maitland said respected the original structure.

Back to the drawing board

The design is set to go before the city's built heritage subcommittee June 18, but Heritage Ottawa hopes it doesn't get past that stage.

The proposed design would "forever disfigure one of Canada's most important heritage sites," the group said in a news release. "Nothing less than excellence is good enough."

Maitland recognizes the need to build an addition, and the property owner's right to do so, but wants them to go back to the drawing board for a dramatic redesign.

Heritage Ottawa said there are no regulations or bylaws forcing an architect to create an addition that is dramatically different than the historic building. The only requirement is that it be "distinguishable" from the original building, the group said.

The group also hopes the architect respects the Venice Charter, an international agreement that sets standards for the conservation of historic buildings.