Ottawa cyclists are calling on the city to change a new detour on Holland Avenue, warning that it has created testy — even dangerous — conditions for commuters along the busy route.

'Super-sharrows' encourage cyclists to ride in middle of the lane, holding up drivers 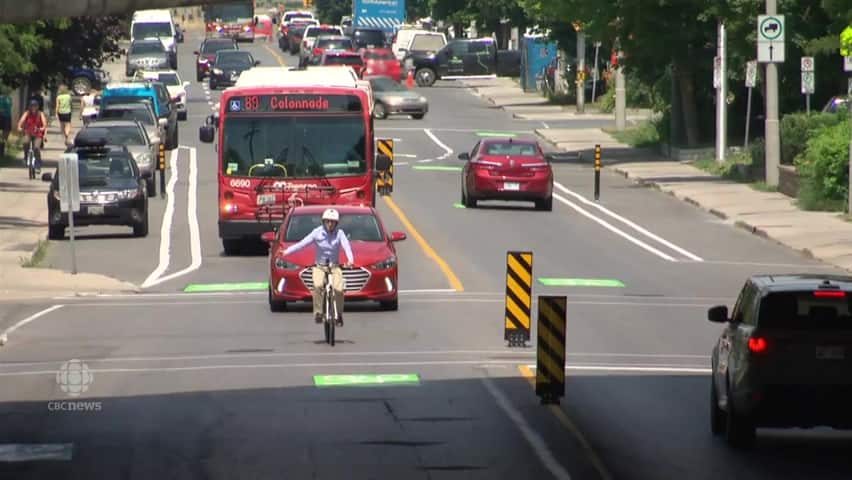 A biker's-eye view of the cycling changes on Holland Avenue

3 years ago
0:46
This is what it's like for cyclists to share the road with drivers along Holland Avenue. Recent changes mean cyclists are now forced to weave in and out of traffic. 0:46

Ottawa cyclists are calling on the city to change a new detour on Holland Avenue, warning it has created testy — even dangerous — conditions for commuters along the busy route.

The city redesigned the 500-metre stretch between Byron Avenue and Kenilworth Street last week, as part of its two-year plan to replace the Harmer Avenue pedestrian bridge — a few blocks northeast of the Ottawa Hospital's Civic campus.

Cyclists are guided along the route by "super-sharrows" — green road markings with a bicycle and two chevrons, set in the middle of the road.

The idea is to encourage cyclists to "take the lane" by riding on top of the sharrows, with drivers expected to follow in a single file.

Jordan Moffatt, a cyclist who often commutes to work using Holland Avenue, says the design is an unsettling ride for cyclists, who might worry about holding back drivers.

"It creates conflict. It makes it so that an injury — or a death — is very easy to imagine," he said.

Part of the problem with the detour, Moffatt says, is that a cyclist following the super-sharrows has to switch lanes several times, including while going uphill.

In response to safety concerns, the city has lowered the speed limit to 30 km/h along the detour and will allow the cyclists to ride on the sidewalk, provided they yield to pedestrians.

"It creates a lot of tension on the road and I think it breeds more contempt for cyclists," he said, noting that drivers have honked at him several times since the detour was put in place.

Plans for the detour initially included temporary segregated bike lanes on either side of Holland Avenue, but that design was quashed after residents complained it would eliminate street parking.

Kitchissippi ward Coun. Jeff Leiper says the detour as it's currently laid out is far from ideal.

"The speed at which traffic moves along Holland Avenue is going to make it difficult for many riders to use those sharrowed lanes and to share them with traffic," he said.

The city is now considering Leiper's proposal to install bidirectional cycling lanes on one side of Holland Avenue — similar to those already in place on O'Connor Street.

That design, Leiper says, would mean a safer commute for cyclists, drivers and pedestrians, while retaining more parking spots than initially planned.

"Now that we've heard the feedback from the residents of the area that they want something safer, I think that has spurred all of us to take a second closer look at that option," he said. 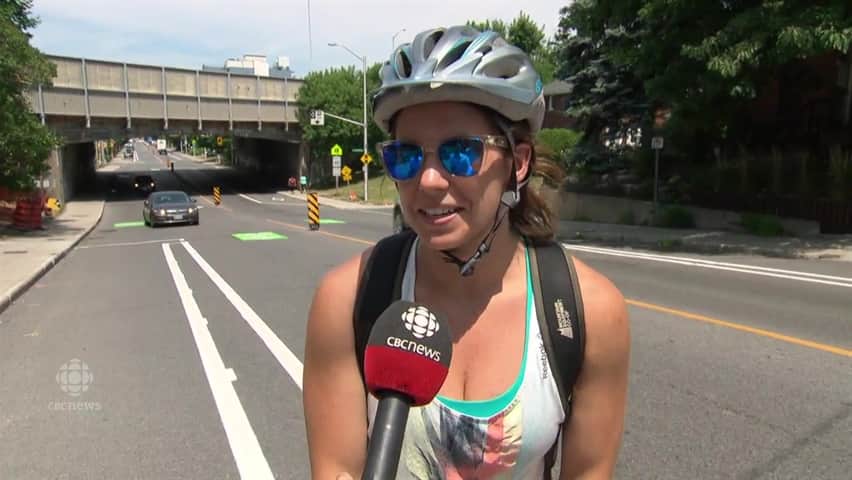 What do Ottawa cyclists think of the changes to Holland Avenue?

3 years ago
0:47
What do Ottawa cyclists think of the changes to Holland Avenue? 0:47

While city staff are open to addressing concerns about the existing design, Leiper said, it's unlikely that bidirectional lanes could be installed anytime before spring 2019.

As for Moffatt, he remains optimistic that the city will respond to cyclists' concerns.

"Drivers, pedestrians, cyclists and people who are parking their cars can all have facilities they need on this street and all be safe," he said.

"You don't have to eliminate parking, but I think we can find a solution where there are separated facilities and parking. It seems to me that's very feasible."