$100M had been allocated for Greenhouse Gas Reduction Fund province-wide

Michael Carson, chief financial officer of the Ottawa-Carleton District School Board, said the fund freed up money for other repairs by covering energy efficient projects.

"Our board has a backlog of this kind of work of about $700 million, so it's discouraging to see the $5 million removed out of our funding stream, but we think we can manage it over the next 18 months," Carson told CBC News.

The maintenance budget for this year is now roughly $60 million, to chip away at the backlog of repairs including plumbing, paving and electrical work. 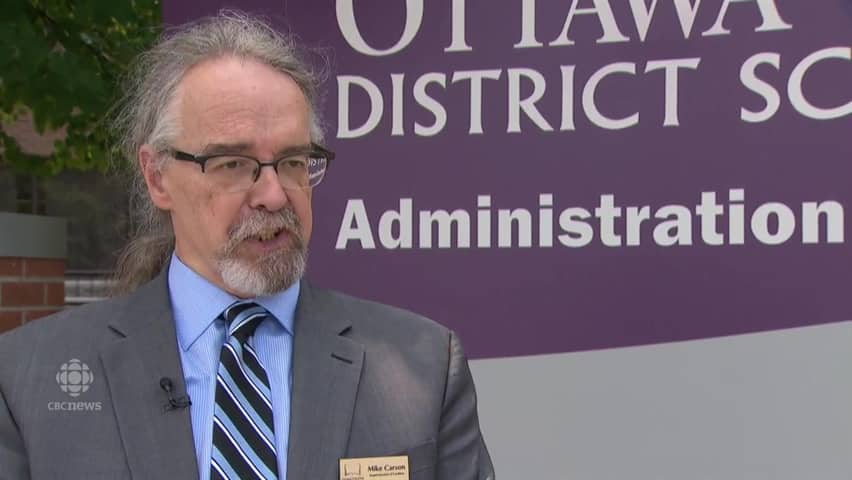 Lighting and solar panel projects now under review, board says

3 years ago
0:44
Without the $5 million in funding, the board is now trying to decide which of its outdoor lighting and solar panel projects are feasible, said Michael Carson, chief financial officer of the Ottawa-Carleton District School Board. 0:44

Malaka Hendela, co-chair of the Ottawa-Carleton Assembly of School Councils, said she's concerned parents will have to raise money to make up the difference since it isn't clear whether the funding will be replaced.

"Our schools are hot. Our schools are old in some parts of the city," she said. "This money probably would've helped improve the soundness of these buildings and to remove it will have an impact."

Carson said projects were prioritized to meet the deadline for the school repair fund, which was spring 2019.

"Much of the work was upgrading lighting systems outside, because we could get that work done quickly. A lot of it was the solar panels on the roof," he said.

"While those certainly improve our efficiency as a board and they reduce our operating cost, they don't have as big an impact on the classroom."

Projects on the OCDSB's list to get done in June also included HVAC upgrades and electric vehicle charging stations for the administration building and Stittsville depot.

Carson said the board will be working with the province to recover costs for engineering assessments and will be shuffling the remaining work to see what can be paid for with other funding.

The Ottawa Catholic School Board, meanwhile, said it found out July 5 that it wouldn't receive $1.517 million in repair funding for the upcoming school year.

Premier Doug Ford's spokesperson, Simon Jefferies, wrote in an emailed statement that Ford received "a strong mandate to end the cap-and-trade system and the slush fund that went along with it."

"Decisions to continue any specific initiatives will be made on a case-by-case basis."