Global Affairs working around the clock to get Canadians home

An expanded call centre at Global Affairs Canada is running 24/7 in an attempt to get Canadian travellers, stranded around the world, back home. 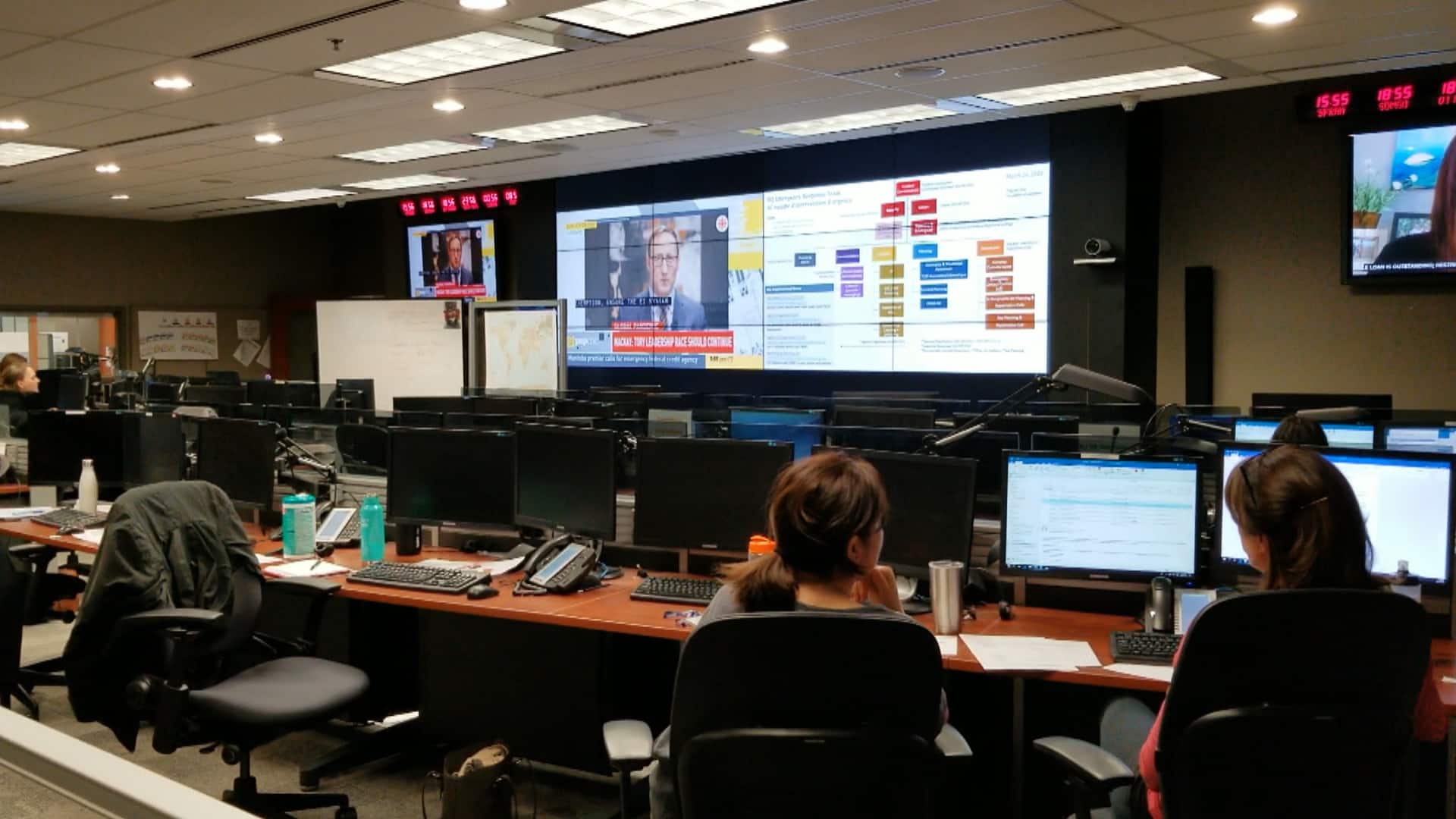 11 months agoVideo
0:55
At an emergency response centre at Global Affairs Canada, hundreds of staff and volunteers are coordinating the process of getting Canadian citizens home from abroad. Brent Robson, director of emergency operations, and Katryna Johnston, emergency planning officer, spoke to CBC News. 0:55

An expanded call centre at Global Affairs Canada is running 24/7 in an attempt to get Canadian travellers, stranded around the world, back home.

For weeks, the emergency response and watch centre inside the Lester B. Pearson Building on Sussex Drive has been expanding to handle the repatriation of Canadians due to the COVID-19 global pandemic.

Between March 23 and 25, the centre received almost 9,000 calls and more than 25,000 emails according to a tweet on Thursday from Foreign Affairs Minister Francois-Philippe Champagne.

"We understand that Canadians want to come home and hundreds of staffers are working around the clock to bring you back safely," said Champagne.

Between March 23-25, we have received 8907 calls + 25 441 emails at our Emergency Response and Watch Centre in Ottawa. We have also sent 37 984 emails. <br><br>We understand that Canadians want to come home and hundreds of staffers are working around the clock to bring you back safely. <a href="https://t.co/qVyTSFVTms">pic.twitter.com/qVyTSFVTms</a>

Brent Robson, incident commander for the COVID-19 response and the director of emergency operations, says the call centre is the "heart of our international response."

The centre's operations jump into action in times of emergency, such as plane crashes or other disasters involving Canadians abroad, he said.

But for the last couple of months, the team has grown by the hundreds.

"On any given day we likely have somewhere around 200 to 250 people and volunteers from across the department who are contributing their time and their energy," said Robson.

Katryna Johnston, an emergency planning officer at Global Affairs, is in charge of operations for the Americas, including areas like Peru where many Canadians are now in lock-down.

It's Johnston's job to work directly with airlines, help with the registration of Canadians abroad and deal with the logistics for planes.

Everyone else on her team right now is a volunteer from another area of the department.

"This is their first time diving into this operation," said Johnston referring to the other workers in the room.

"They've been able to have so many successes with planes getting out, working with so many different airlines, with different missions, on different continents."

Flights from El Salvador, Guatemala, Honduras and Tunisia are in the works as well, the department says.

Still, there are people like Greg Bestavros, from Mississauga, Ontario, who are still unsure how they'll get home from Peru.

"Now we're in a situation where I don't know if we're gonna be able to make it home," said Bestavros in an interview with CBC on Thursday.

As of March 24, there were 4,300 registered Canadians in Peru, according to Global Affairs Canada.

Foreign Affairs minister said not everyone will be able to get back right now.

Which means the team at the emergency call centre will have to figure out how to help people who remain abroad.

Canadians in need of emergency consular assistance from anywhere in the world can call the 24/7 Emergency Watch and Response Centre in Ottawa at +1 613-996-8885 (collect calls are accepted where available) or email sos@international.gc.ca