As many as 15 people are homeless after a late-night, multi-building fire in Ottawa’s Centretown neighbourhood on Sunday.

Fire officials believe it was started by a candle 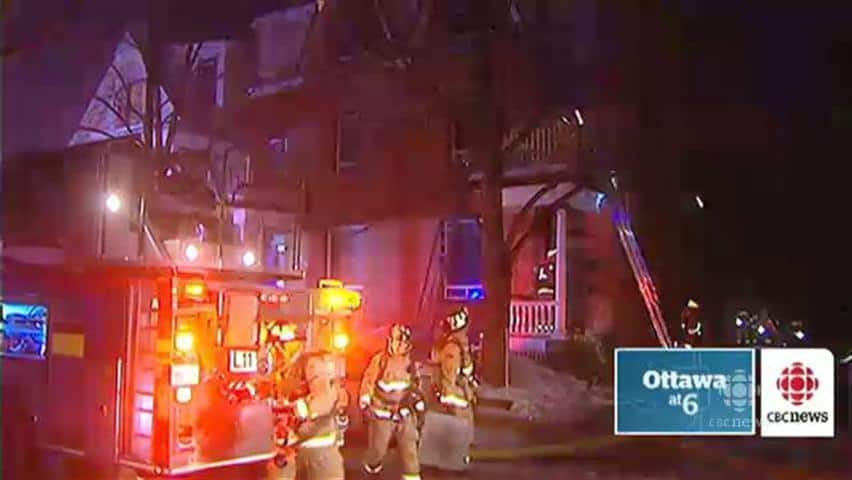 7 years agoVideo
2:07
50 firefighters took most of night to control blaze on Gilmour Street. 2:07

As many as 15 people are homeless after a late-night, multi-building fire in Ottawa’s Centretown neighbourhood on Sunday.

Ottawa fire crews were still putting out hot spots around 6 a.m. Monday at three buildings on Gilmour Street. The fire has since been declared under control.

Fire officials said they were called to a townhouse at 546 Gilmour Street around 10:30 p.m. Sunday, a fire which reached four-alarm status and spread to two other buildings.

Damage is estimated at $1.5 million to the three buildings, down from a combined $2 million estimate earlier Monday.

They believe a candle started the fire.

Jennifer White lives in the building next door and said she was woken up by one short-lived alarm, followed by another coming from her building's lobby.

"I looked outside my window and saw there was smoke, some lights were coming up the street and I noticed the neighbour from the unit next to ours, where the fire started, was outside crying so I realized it was probably time to get out of bed,” she said.

White said she went to the front door and saw flames coming from the second-storey balcony of 546 Gilmour Street, so it would probably be spreading.

“The electrical wires started popping and exploding from the flames, that’s when it became real," she said.

”To actually see your house on fire is not a good feeling.”

Ottawa police have reopened all streets closed because of the fire.

Mobile users click here to see a map of the area, including street closures.