Some people living in Ottawa's ByWard Market say the recent proliferation of short-term rental "ghost hotels" has turned their residential street into a magnet for crime including theft, prostitution and public nudity.

Some people living in Ottawa's ByWard Market say the recent proliferation of short-term rental "ghost hotels" has turned their residential street into a magnet for crime including theft, prostitution and public nudity.

Neighbours on St. Andrew Street say at least five short-term rental units have popped up in one half-block, including several in the same building.

It's really frustrating that the neighbours are the ones who have to monitor the situation and try to enforce some sort of decent behaviour.- Kate Laing, St. Andrew Street resident

"It's really frustrating that the neighbours are the ones who have to monitor the situation and try to enforce some sort of decent behaviour," resident Kate Laing said.

"The Airbnb owners make a lot of profit on their properties, and yet it's the city who is paying the money to have the police and bylaw attend on a regular basis."

Laing, who has lived on St. Andrew Street for 21 years, said she's noticed a spike in crime since the short-term rentals moved in.

In one incident earlier this month, residents said two men were seen switching the licence plate on a car parked outside one of the rental properties in the middle of the night before getting into a fight on the street.

"They threatened to shoot someone, and we called the police and then the police came and found out that the car was actually stolen, and so these men were arrested for auto theft," Laing said.

She described another incident in late April in which neighbours called bylaw because of all the parking violations near one of the buildings. That led to an investigation into prostitution, Laing said.

"The only people going into the property were single men going in, in rotation."

In yet another incident in mid-April, a motion-activated camera caught a naked man streaking down the street and stealing a flag from a resident's front porch before running back toward one of the rental properties. 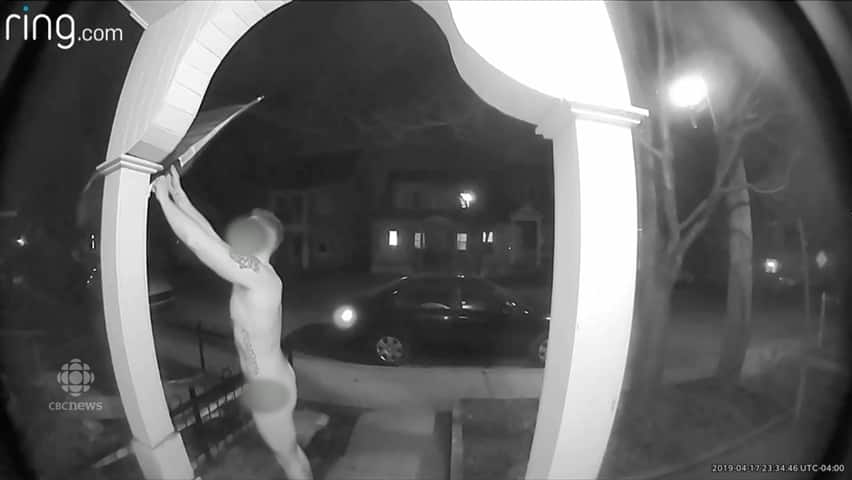 2 years agoVideo
0:20
In April, a motion-activated camera caught a naked man stealing a flag from a resident's front porch. 0:20

"They're not understanding their effects on the community," resident Claire Sawyer said. "People don't feel safe, somebody coming out with their children in the evening could be exposed to a man exposing himself, and it just adds to an atmosphere of unpredictability."

Airbnb has confirmed two of the properties where the police investigations took place, 238 and 240 St. Andrew St., were among the company's listings, but could not confirm a third property.

In a written statement, an Airbnb spokesperson said the company wants "to do everything we can to help our community members be good neighbours in the places they call home. We are actively investigating these listings."

Contacted by CBC, the owner of one of the St. Andrew Street properties refused to comment. The other didn't respond to CBC's request for an interview.

According to correspondence between residents and police that was obtained by CBC, investigators also notified a special police team known as "Pivot" about one of the properties.

In a verbal report to the city's police services board last July, former chief Charles Bordeleau described Pivot as employing "traditional methods of enforcement" combined with "preventative measures" to "foster trust with residents most impacted by street-level violence."

Crime up near rentals

Coun. Mathieu Fleury, whose Rideau-Vanier ward includes St. Andrew Street, confirmed the city has been seeing an increase in crime around short-term rental properties, particularly in the Lowertown/ByWard Market area.

He said of the about 2,000 units for rent on Airbnb in Ottawa, 600 of them are in those neighbourhoods.

"We're seeing a lot of neighbourhood complaints relating to noise, most recently relating to prostitution and drugs," Fleury said.

The city has hired a consultant to review what should be done about licensing short-term rentals and will be engaging with the public over the summer, Fleury said.

"We've got a shelter up the street that's run by the Shepherds of Good Hope and those are good neighbours, you know? We know one another, and the whole point of this is we need to know our neighbours. It makes for a safer and happier community," Laing said.