Police arrest 151 people in Gatineau after busloads of student protesters arrived from Montreal as part of provincewide demonstrations against the Quebec government's proposed tuition-fee hike. 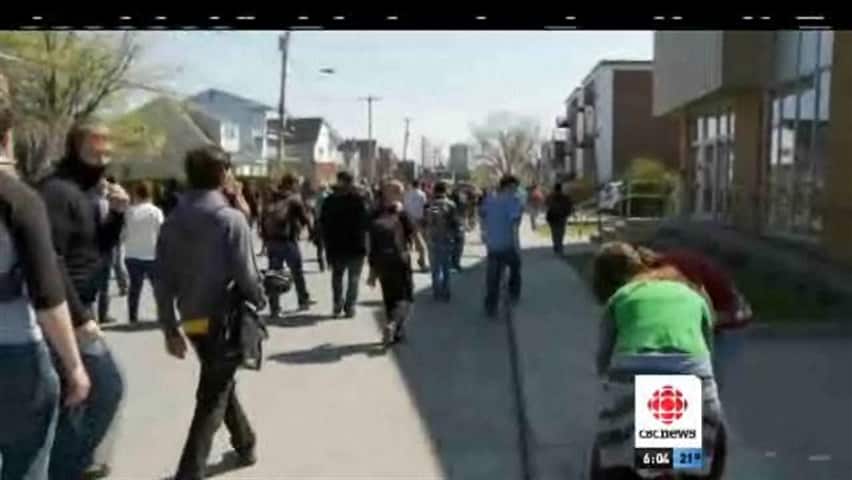 9 years ago
2:39
There were 151 more arrests Thursday as protesters marched through the streets. 2:39

Police arrested 151 people in Gatineau Thursday after busloads of student protesters arrived from Montreal as part of provincewide demonstrations against the Quebec government's proposed tuition-fee hike.

About 400 students took part in the demonstration at the University of Quebec's Outaouais campus, Gatineau police said. Police said it was clear that the protesters had no intention of co-operating with authorities.

Hundreds of crickets were released into the university's library while other students painted walls and put holes into them.

Mischief charges were laid against 148 of the protesters, while the remaining three face more serious charges of obstructing police and disturbing the peace.

Two people suffered what are thought to be minor injuries, though police were unclear. One protester was led away from the scene with blood pouring down his face.

Both Gatineau police and Quebec provincial police, including officers in riot gear, were on hand to control the crowds, mainly using riot shields.

The school had sought a court injunction to remove the student protesters but they continued to return to the campus.

The 151 arrested protesters were expected to appear in court Thursday and be released sometime in the evening.

The rector of the university, Jean Vaillancourt, said all Friday classes have been cancelled to ensure the safety of staff and students.

He also blamed "outside protesters" from the Montreal area for escalating the conflict, not students of the school.

The province's plan is to increase the amount students pay by $1,625 over five years. Students are angry over the planned hike and the government refuses to back down.

Six busloads of students arrived at the Robert Guertin Arena and walked along des Allumetières Boulevard to the University of Quebec's Outaouais campus. That is where protests led to 161 arrests Wednesday for obstructing police.

The students clashed with police as they tried to enter buildings at the Tâché campus of the university. Then they moved the protest back to the streets.

Classes were cancelled for a couple of weeks but some other students also sought an injunction to have the classes resume this week.