Gatineau’s LRT plan could be the first step toward rail traffic returning to the Prince of Wales Bridge.

Prince of Wales Bridge 1 of 2 links over Ottawa River in $2.1B light rail plan

Gatineau's LRT plan could be the first step toward rail traffic returning to the Prince of Wales Bridge.

The city unveiled its plan on Wednesday, a $2.1 billion proposal that would bring commuters across the Ottawa River at both the Prince of Wales and Alexandra bridges.

The plan is just a proposal at this stage, with the city set to embark on two years of studies and consultation about what it would take to make the project a reality, but the hope is it could be in service by 2028.

Gatineau Mayor Maxime Pedneaud-Jobin said the plan is about much more than his city.

"We are not making Gatineau stronger with the project. We are making the whole region stronger," he said.

He put forward his proposal as a provincial election in Quebec is just around the corner, saying he wants the political parties running to commit to helping build the project. 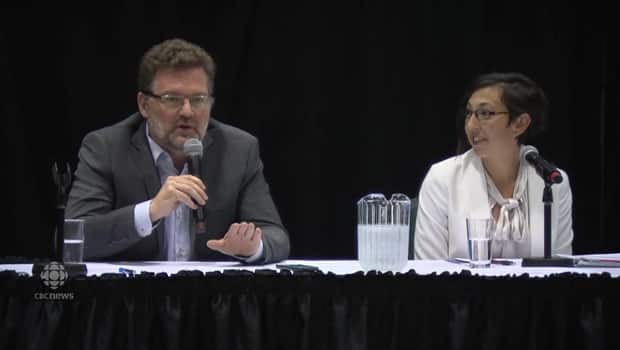 5 years ago
0:43
Gatineau Mayor Maxime Pedneaud-Jobin says he wants to get every political party in the Quebec provincial election on board with the city's LRT plan. 0:43

The City of Ottawa owns the Prince of Wales Bridge and has also expressed long-term plans to use it for a rail crossing.

Pedneaud-Jobin said it's too early to talk about who pays for what in any potential project.

"We will have that discussion at one point in time. What we presented today was a vision for the future," he said.

Ottawa Coun. Jeff Leiper, whose ward has the bridge on its border, said Gatineau's vision is good for everyone and could help get Quebec commuters out of their cars, easing congesting in central Ottawa wards.

He said Gatineau's study is good for the city, because it will present a clear cost for what the bridge needs.

"It's not really clear to anybody at this point how much it would cost to get that bridge back into service," he said.

In 2013, the City of Ottawa's transportation master plan estimated it would take tens of millions of dollars to transform the bridge into a multi-use crossing.

Leiper agreed with Pedneaud-Jobin that it's too early to speculate on who pays.

The Kitchissippi councillor said he wants to space for pedestrians and cyclists to use the bridge as well, but for now he is just happy to see moves toward reopening it.

"The bridge is absolutely gorgeous," he said.

"It is going to be at some point a very important part of regional transportation."