An Ottawa farmer who's waited six weeks for seasonal labourers to come help plant his crops says new restrictions on foreign workers is threatening to ruin his business.

An Ottawa farmer who's waited six weeks for seasonal labourers to come help plant his crops says new restrictions on foreign workers is threatening to ruin his business.

For the past 25 years, Andy Terauds of Acorn Creek Garden Farm in Carp has relied on the Seasonal Agricultural Worker Program (SAWP) to bring pickers and planters from the Caribbean island nation of Saint Lucia.

It's almost put me to the point of closing the farm because I have to get this stuff in the ground to have something to sell later on.- Andy Terauds, farmer

On Dec. 31, 2018, applicants from Asia, Asia Pacific and the Americas were added to the list of foreign workers who must provide the data, so this is the first planting season Terauds has had to navigate the new rules.

"It's almost put me to the point of closing the farm because I have to get this stuff in the ground to have something to sell later on," Terauds said.

By the end of April, Terauds normally has three workers from Saint Lucia helping him move his beets, tomatoes, broccoli, lettuce and other vegetables from his greenhouses into the fields.

The workers, all men in their 30s, leave their families behind to earn eight to 10 times what they'd earn at home, Terauds said.

But with no one in Saint Lucia accredited to collect the official photographs and fingerprints now needed to come to Canada, the men each had to pay about $400 Cdn to fly to Trinidad to have the biometric data collected there.

"It's tough for them, [but] it's tougher for me because here we are, six weeks [into planting season] and I haven't got a thing in the field yet," Terauds said.

The workers' biometric information was submitted weeks ago, but is now awaiting processing by Immigration, Refugees and Citizenship Canada (IRCC), holding up their arrival. 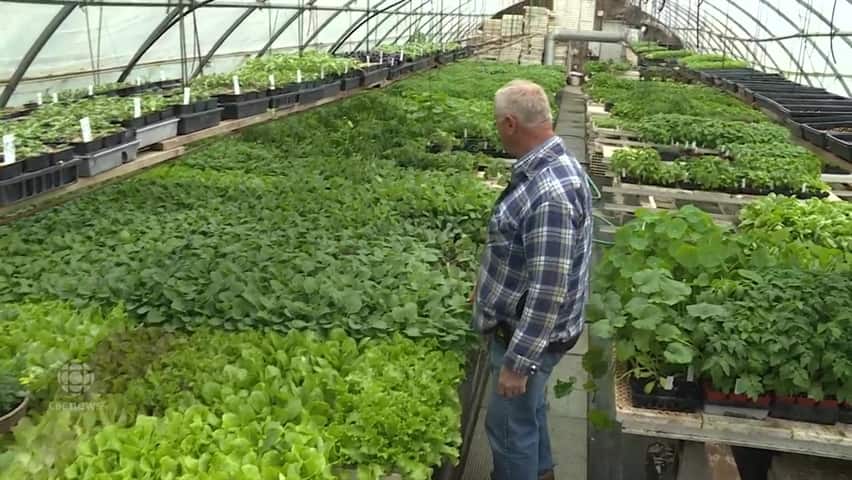 1 year agoVideo
1:17
Andy Terauds, of Acorn Creek Garden Farm in Carp, says the seasonal employees he usually hires from Saint Lucia have been hampered this year by new requirements from the federal government. 1:17

In an email, IRCC spokesperson Rémi Larivière said it's too early to comment on the impact that processing time is having on the foreign workers from Asia, Asia Pacific and the Americas.

Larivière said the biometric information, once filed and processed, is valid for 10 years, so the workers should be able to travel to Canada with relative ease next season.

Terauds said he hasn't been able to find Canadians willing to work for minimum wage.

The Canadian Chamber of Commerce says with the unemployment rate currently near a record low, farmers in particular rely on the SAWP.

"If the delays are 100 days or 150 days, the season is over, and that's a big concern," said Leah Nord, the chamber's director of skills and immigration policy.

For now, Terauds is doing the work of four men by himself, and growing increasingly angry with the bureaucracy.

"It seems like every year the Canadian government tries to make it harder for us to bring in offshore labour to fill those jobs that Canadians don't want," he said.