A float plane pilot’s flight under a bridge connecting Ottawa and Gatineau Saturday left concerned pilots and frightened boaters in its wake. 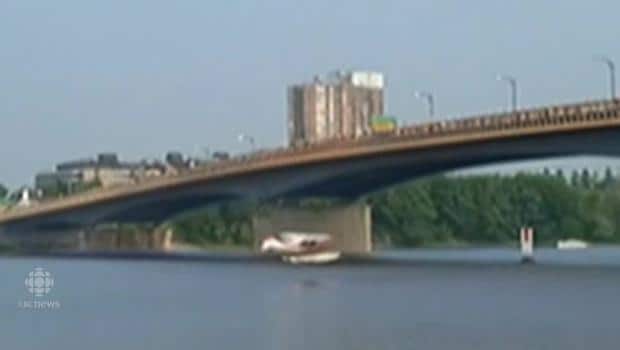 6 years agoVideo
1:20
Peter Burpee sent in this cell phone video of a float plane taking off under the interprovincial bridge. 1:20

A float plane pilot’s flight under a bridge connecting Ottawa and Gatineau left concerned pilots and frightened boaters in its wake last weekend.

A group from the Ottawa Rowing Club were preparing for one of their bigger regattas of the year last Saturday morning when they said a float plane motored past them on the water.

They said it then turned around, sped up and came right at them, lifting out of the water and taking off underneath the Macdonald-Cartier Bridge.

Rowers can be heard screaming as the plane approached in a cell phone video of the incident.

"We expect motor boats around here, we expect rowing shells, kayaks, canoers. But a plane, never seen it before," said Paul Hawksworth, a coach at the club.

Instructors at the Ottawa Flying Club said taking off under a bridge isn’t technically illegal, but is reckless.

Canadian aviation regulations say pilots are supposed to stay 500 feet away from people and structures except when taking off and landing.

"Certainly flying under a bridge is not something we would condone and there would certainly be internal discipline," said Bryce Hanna, general manager of the flying club.

"I think it should be clear that you don't do foolish, risky behaviour like that and certainly not downtown in an urban core," Burpee said.

If the pilot is found to be flying recklessly and endangering anybody, including themselves, they could have their license suspended, be fined or be reprimanded.

Transport Canada said in a statement it's looking into the incident.

"Appropriate action will be taken if it is determined that a violation has occurred. When determining the appropriate action, the Department considers the seriousness of the violation," it said.

"Depending on the violation, action may range from oral counselling to prosecution."