The city of Cornwall is banding together to help about 95 students after a fire ripped through much of the Ontario Hockey Academy on Thursday night. 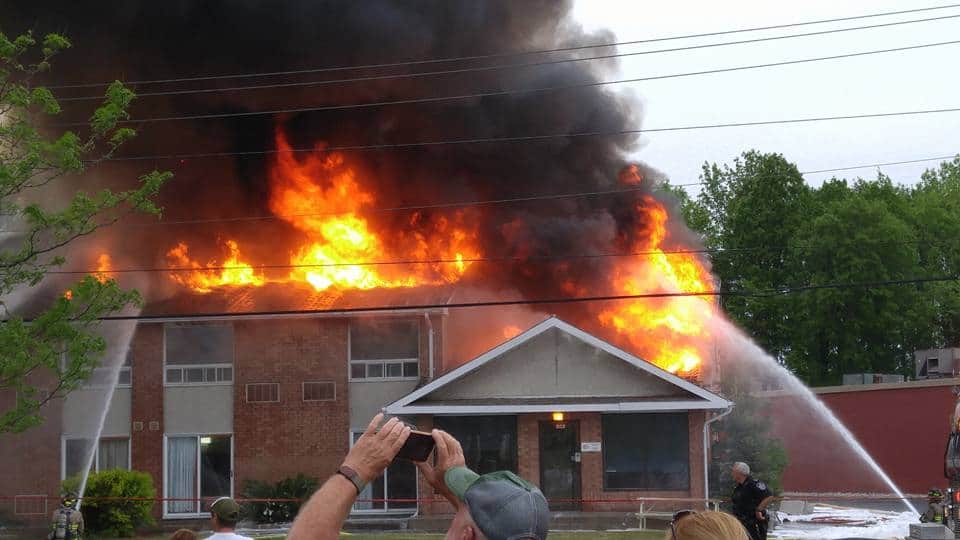 5 years ago
1:02
Aaron White shot this footage of a private hockey academy in Cornwall, Ont., that caught fire on Thursday evening. 1:02

About 95 students are staying at a Cornwall, Ont., hotel after escaping a fire that ripped through the dormitory of the Ontario Hockey Academy Thursday night, fire officials said.

"Many of the kids are really upset, but they're resilient," said Scott Lecky, owner of the Ramada Inn, on Thursday night. "They're huddled together in groups and they're comforting each other."

Fire crews were called to the private hockey school at 1541 Vincent Massey Dr. at about 6:40 p.m. on Thursday. When they arrived the building had already been evacuated and everyone was unharmed, said Cornwall fire chief Pierre Voisine.

"Crews did an exceptional job of trying to stop the fire in its path," said Voisine. "We essentially split the building in half and cut its progress to essentially half of the building, although it's a significant loss here."

Winds from the east made fighting the fire a challenge but Voisine said crews had it under control in less than two hours, with the assistance of firefighters from South Stormont.

A retirement home west of the hockey academy was also evacuated as a precaution but residents were able to return home Thursday night, said Voisine.

The Ontario Hockey Academy is a private school that offers the "very best in academics along with elite hockey" to students from around the world, according to its website.

Many students had close call with the fire

"We heard the alarm go off in the room and we walked down and there was a bunch of smoke so someone ran and pulled the fire alarm," said student Tyler Caseley.

16-year-old Erica Monaco of Baldwinsville, N.Y. was alone in her room when the fire broke out.

"I was in the shower when the alarm went off and just didn't stop.  I wasn't sure if it was a false alarm or what. So I got out of the shower in my towel," said Monaco.

It wasn't long before parent chaperones, checking the rooms for students who hadn't yet escaped the building found Monaco. She only retrieved her U.S. passport from firefighters Friday.

"I'm in shock a little bit, but it's good that everyone got out safe," she said. "I mean, we can replace all the clothes and hockey gear and that stuff — that's what's important."

The Syracuse-area teen was finishing her second year at the academy. The fire means the 16-year-old won't have to write some final exams because of a policy that grants an exemption after an emergency.

Students scrambling to get travel documents

City buses ferried students to the nearby Ramada Inn on Thursday night where owner Lecky said parents were frantically calling Thursday night looking for their kids aged 13 to 18.

"It's quite sad," said Lecky, adding some of the international students had been planning to head home beginning Friday.

"Many of the kids have lost their passports and all their travel documents so you can imagine it's a bit of a logistical nightmare."

Now those international students are scrambling to make other arrangements.

"Hopefully we will be heading home tomorrow like planned, but if we don't then it's going to be a problem. But we'll just have to deal with it," said Patrick Larkin, a 15-year-old from outside London, UK.

Larkin said he'd chosen Cornwall and its hockey academy as a place to improve in the sport played also by his father. The fire at the academy wouldn't discourage him, he insisted.

"There's no doubt," said Larkin when asked if he planned to return for the new school year in the fall. "This is a really, really good school and it's just unfortunate that this happened".

Larkin and British schoolmates Ben Solder and Sam Russell drove to the British High Commission in Ottawa on Friday, where they hoped at least temporary travel documents could be arranged.

Fire cause under investigation

"We've Isolated the area at the point of origin," said Cornwall fire prevention officer Morris Lamer. "We've got one wall that we're dealing with where there may or may not be an AC unit involved."

He said it was too early to suggest the air conditioning unit was the cause, but was waiting for an assessment of the structure before proceeding with a closer investigation.

The damage estimate hadn't been formally calculated, but Lamer said with smoke and water damage through most of the former motel he expected it to run between $3 million and $5 million.