Billboards designed to put pressure on Ottawa Senators owner and CEO Eugene Melnyk to sell the team have gone up at several locations around Ottawa. 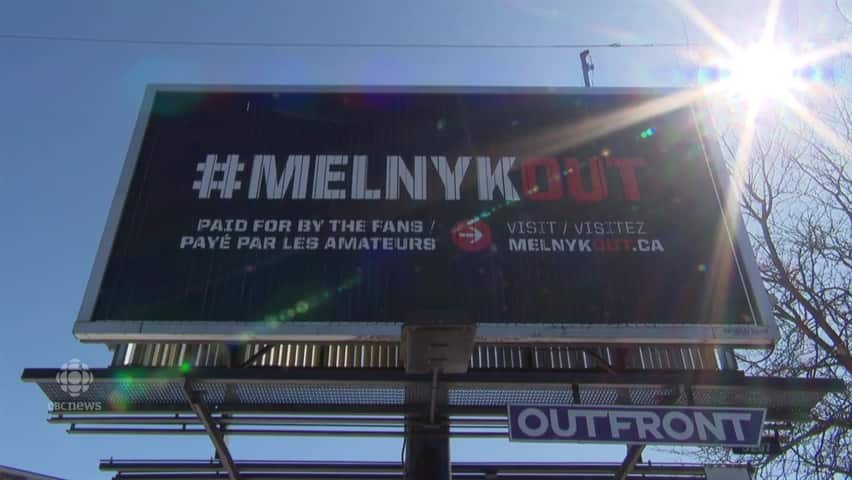 3 years agoVideo
0:16
Senators fans have put up billboards around Ottawa signalling their frustration with the team's owner and CEO 0:16

Billboards designed to put pressure on Ottawa Senators owner and CEO Eugene Melnyk to sell the team have gone up at several locations around Ottawa.

The billboards went up Monday and will remain for two weeks at:

A fifth sign is set to go up April 2 and stay up for one week at Bank near Riverdale Avenue.

Spencer Callaghan raised money for the billboards in February. In an interview with CBC Radio's Ottawa Morning Monday, he said it "feels good" to know they're finally being installed.

"Quite honestly, people are sad that this team is going through such a tough time, and that doesn't just mean on the ice — quite frankly this has nothing to do with the product on the ice; this has to do with the organization as a whole.

"They're happy that there's a way now for them to have a voice and be heard, because unfortunately, if you simply don't buy tickets, your empty seat doesn't speak."

"Unfortunately there was no availability around the Canadian Tire Centre until the fall, according to the company that we approached. So our next best bet was to try to get maximum visibility," he said.

In early March, Melnyk sent a letter to season ticket holders promising sweeping changes to rebuild the team and reaffirming his commitment to keep the Senators in Ottawa.

"Enduring a tough year has given us a chance for clear-eyed evaluation," Melnyk wrote. "This is an ongoing process but I can tell you one thing: we are not looking to just tweak our lineup nor mortgage our future for stop-gap solutions."

Callaghan said it did little to mollify angry fans.

"I would suggest it made it worse, because the letter really came off as kind of tone-deaf. One, the letter was only sent to season ticket holders ... but second, it was just a very vague letter without a lot of concrete actions involved."

Much of the disgruntlement has to do with the team's perceived penny-pinching, Callaghan said.