Tornado strikes were 'luck of the draw,' says meteorologist

They're more associated with Canada's prairie provinces, and Mayor Jim Watson says the aftermath looks like a scene out of Oklahoma. So how did two powerful tornadoes end up touching down in Ottawa-Gatineau?

Twisters rare in region — but they do happen

They're more associated with the prairie provinces.

So how did two powerful tornadoes end up devastating parts of Ottawa-Gatineau?

"I think it's been just the luck of a draw. Because tornadoes do happen in Ontario. And September certainly [is] rare to get a tornado," said Gerald Cheng, a meteorologist with Environment Canada.

"Unfortunately it actually happened. But it does happen."

On Friday afternoon, temperatures in Ottawa-Gatineau hit 28 C, with the humidity making conditions feel — at their absolute muggiest — closer to 37, according to data from the weather agency.

When we have tornadoes, they are certainly capable of destruction just like this.- Gerald Cheng

That meant that conditions were "really ripe" for thunderstorms that could produce tornadoes, Cheng said.

"The humidity, the heat was there. It was sort of the final full day of summer. So all the ingredients were there," he said.

Environment Canada has said that two twisters touched down in the region Friday.

The most powerful was an EF-3 tornado that, for 40 minutes, tracked eastward from Ottawa's rural Kinburn and Dunrobin neighbourhoods over the Ottawa River and into Gatineau.

According to the Enhanced Fujita Scale, which Canadian meteorologists use to assess the speed of tornadoes, that particular tornado would have produced wind speeds of up to 265 km/h.

The second twister, with touched down in Ottawa's Arlington Woods neighbourhood at around 6 p.m., was an EF-2 tornado, which means wind speeds likely hit somewhere between 178 and 217 km/h.

"It's rare to get a tornado, but when we have tornadoes they are certainly capable of destruction just like this," Cheng said.

The pair of tornadoes that touched down Friday were certainly calamitous, but they may not have actually been the most powerful to hit the region in the past 25 years.

In 1994, a twister cut a swath through Gatineau's Aylmer neighbourhood, hitting 385 homes, injuring 15 people, and causing $8 million in damage.

It was considered an F3 tornado on the previously used, less accurate measurement scale, meaning wind gusts were somewhere in the 250 to 320 km/h range — potentially powerful enough to overturn a train.

While the 1994 tornado may have had higher wind speeds, Cheng said that for the 2018 tornado season in Ontario, nothing's topped Friday's EF-3 twister.

"The strongest tornado so far this season in Ontario would be this one."

With files from Margot Wright 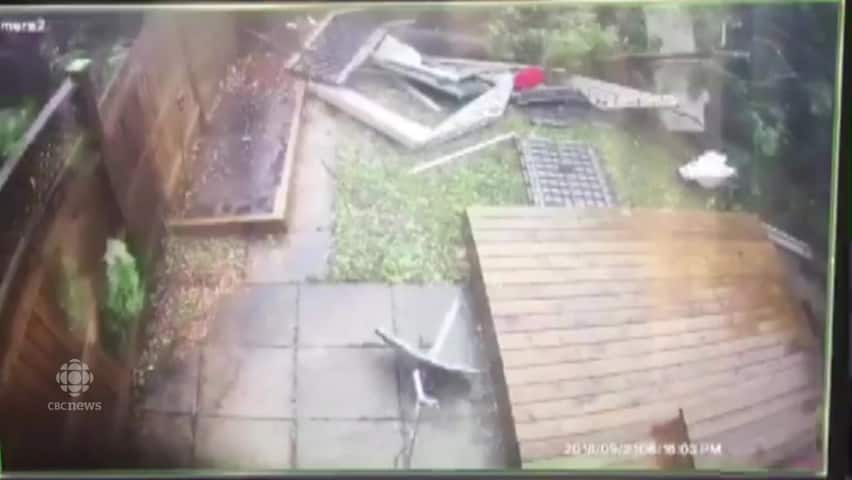 Watch how fast this tornado moves

3 years ago
0:49
In less than a minute, Kashy Barakat's backyard in Ottawa was torn apart. 0:49
CBC's Journalistic Standards and Practices|About CBC News