An elk spotted in the bushes off Albert Street this morning is dead after it was shot by police Tuesday afternoon. 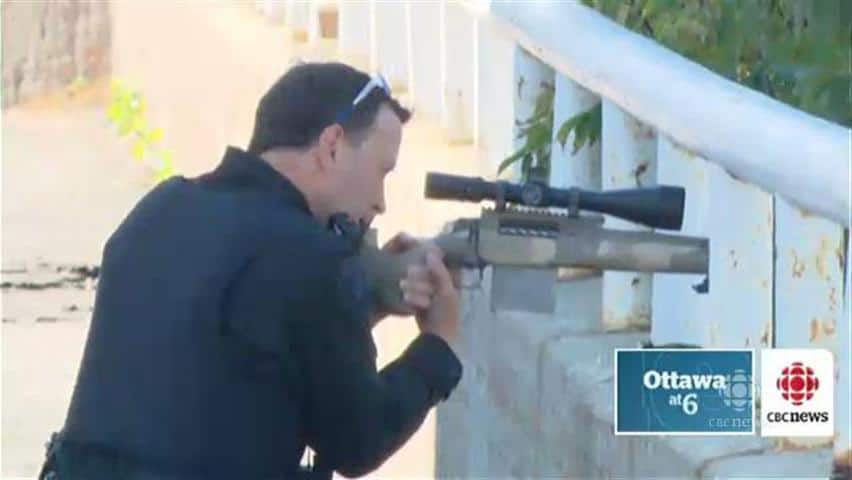 Elk shot and killed by police

An elk spotted in the bushes near the City Centre building off Albert Street Tuesday morning is dead after Ottawa police shot it with a gun.

City and National Capital Commission staff and Ottawa police spent the day trying to tranquilize the animal but were unsuccessful, according to Ottawa police Acting Insp. John McGetrick.

After the animal became agitated, police officers say it became a public safety issue, forcing them to to put it down.

A crowd of onlookers who had gathered to watch the animal were visibly upset after learning the animal had been killed and not tranquilized.

McGetrick said police officers are also upset about the outcome, but said they had exhausted "all possible options" in dealing with the 800-pound animal.

"After several hours of containment and several attempts to safely tranquilize the animal, a decision was made at 2 p.m. to put the animal down, said Bordeleau in a statement.

"This decision was made after carefully assessing the risk factors relating the public, police and the animal.  Prior to the decision, the animal was displaying elevated indicators of agitation and National Capital Commission (NCC) on scene officials advised that the risk to the public would be extremely high if the animal were to breach the established police containment area," said Bordeleau.

"Again, throughout the day our goal was to protect the public and the animal. Unfortunately, that was not possible in this event," he said.

Police and National Capital Commission staff had set up a perimeter around the animal and closed Albert and Scott Street between Preston Street and Bayview Road and the Transitway from Tunney's Pasture to Lebreton Flats.​

O-Train service was also shut down between Bayview and Carleton University.

All roads have since reopened and regular OC Transpo service has resumed.

The first calls about the male elk started coming in at about 7:36 a.m., police said.

Instead, officers were trying to keep it off the road and push it back to its natural habitat, Soucy said. Several local farms were called, but no one had reporting a missing elk.

A crowd of people gathered at the scene to take pictures and video. They were moved further down the street by police when National Capital Commission staff arrived to deal with the animal.

Ottawa South MPP John Fraser said the NCC had offered two safe sites west of Ottawa to drop off the elk had it been tranquilized The sites were approved by the Ministry of Natural Resources.

According to the Ministry of Natural Resources, about 120 elk were released into the Bancroft and North Hastings area in 2000-01. The ministry's goal is to bring the population up to 400-600 elk.

The herd area stretches as far east of Bancroft as Lanark Highlands, Mississippi Mills and Arnprior, just west of Ottawa.