A four-year study suggests both Ottawa and Toronto would benefit from multiple supervised drug injection sites instead of one centralized location. 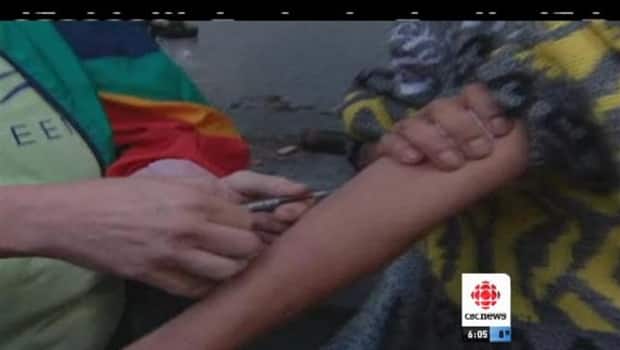 A four-year study suggests both Ottawa and Toronto need supervised drug injection sites because it would reduce both harm to drug users and the public.

The feasibility study, by researchers at the University of Toronto and staff at St. Michael's Hospital, was requested by the City of Toronto in 2008 and later expanded to include Ottawa.

The research was led by Dr. Ahmed Bayoumi of St. Michael’s Hospital and Dr. Carol Strike of the University of Toronto.

P.O.V.: Would you want a supervised drug injection site in your city? Have your say here.

They did not recommend any specific locations but did suggest more than one centralized location, which is what Vancouver has with its Insite program.

The study said it is "up to the communities in both Ottawa and Toronto to decide if, when or how to proceed" with the recommendations.

Ottawa, Toronto have 'dispersed drug use'

"Drug use is dispersed in Ontario’s two largest cities, unlike Vancouver where it is concentrated in the Downtown Eastside," the report said.

Drug users and community members who were consulted by researchers also did not want one single centre because it could be a focus of opposition and also have a large impact on nearby neighbourhoods.

The issue became a focus in the Ottawa mayoral race in 2010 after former mayor Larry O'Brien voiced his opinion against the sites.

The study included a simulation of the impact of running supervised sites in the two Ontario cities and examined factors such as costs, and the impact on infectious diseases and on nearby property values. Mobile injection sites were also considered.

The report, believed to be the broadest of its kind, was funded by the Ontario HIV Treatment Network and the Canadian Institutes of Health Research.

Ministry of Health won't pursue sites 'at this time'

Health Minister Deb Matthews released a statement Wednesday thanking the researchers, but added the government would not pursue supervised drug injection sites "at this time." Matthews added experts are divided on the issue.

"They save lives, they save money, they reduce sharing of equipment and disease spread," said Holly Kramer, who co-ordinates the Toronto Harm Reduction Task Force.

"They increase access to treatment for marginalized people and they increase public order, so why wouldn't you have them?"

With files from the CBC's Giacomo Panico and Maureen Brosnahan