Tax break will save lowest-paid workers up to $800 per year, PCs say

"Under the PC government, if you are making minimum wage you will pay zero per cent tax," Ford told supporters at a restaurant in the Ottawa riding of Orléans.

It was the first of what will be five major policy announcements ahead of the official start of the provincial election campaign.

The credit will benefit some 623,000 workers and cost of $500 million per year, according to a background document from the party. It will save the typical full-time minimum-wager earner $800 per year, the party said.

Ford has vowed to roll back the Liberal government's minimum wage increase next year to $15 per hour. 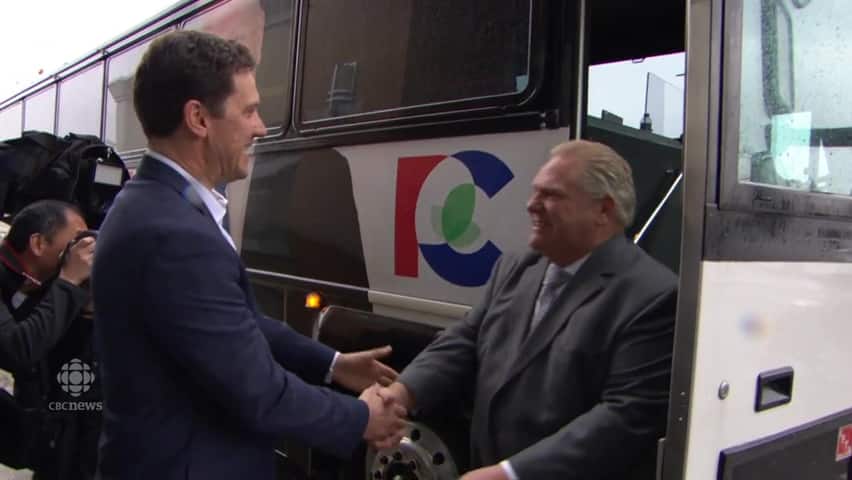 Ford's decision to deliver the promise in Orléans was intentional, PC insiders tell CBC, because the riding has traditionally voted with the government in power.

The PCs are eyeing Orlé​ans as a swing riding, along with Glengarry–Prescott–Russell and Ottawa West–Nepean.

The sitting Liberal MPP, cabinet minister Marie-France Lalonde, won her seat with a comfortable 54 per cent of the vote.

The PC candidate for Orléans, Cameron Montgomery, said Ford's visit — his first since his election as leader — sends an important signal to constituents.

"It's so important," Montgomery said. "There's a wave of positivity and a feeling of change."

Montgomery, a francophone who has worked for more than 15 years with the Montfort Hospital's mental health research unit, has been canvassing in the riding for more than a year.

Ford will remain in Ottawa to attend a rally with supporters at the Nepean Sportsplex Monday evening.