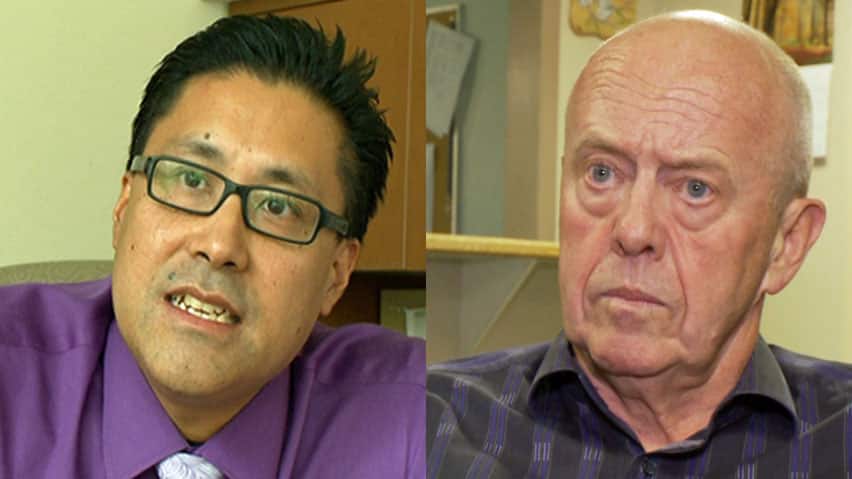 6 years ago
6:33
A geriatric psychiatrist and family physician have different takes on the issue of assisted suicide. 6:33

A geriatric psychiatrist in Ottawa fears easing access to physician-assisted suicide will lead to a jump in deaths and leave him in a difficult position, as he strives to provide hope for his patients when there is much despair.

On Wednesday, the Supreme Court will begin debating a case from the B.C. Civil Liberties Association and two women who have intractable and progressive diseases — ​Kay Carter and Gloria Taylor — who want to allow seriously and incurably ill but mentally competent adults the right to receive medical assistance to hasten death under specific safeguards.

There are supporters and detractors for that right. Dr. Timothy Lau counts himself on the opposite side of the debate.

​Lau says patients discuss suicide with him on a daily basis, adding some have asked him to help them end their lives. He said his job, as a result, becomes one of providing hope to his patients and believing in the value of life.

"I treat a lot of patients where they’ve lost many abilities and what concerns me is people seeing these patients and thinking that their life doesn’t have value. They’re often looking for someone to have hope for them," Lau said.

"I can’t say you’re better off dead. They’re looking for something more when they see you."

Lau referenced a study in the Journal of the American Medical Association from 2000, which stated half of people who considered the option of physician-assisted suicide later changed their minds.

He said a change in the law surrounding physician-assisted suicide, which Quebec will soon put into place, would be counterintuitive by “trying to promote life by having a law that inflicts death.”

He referenced and supports the “slippery slope” mentality where devaluing human life will lead to continued and increased devaluing of more human life.

"You’re calling the inflicting of death as some sort of medical treatment. It would change the character of hospitals, the nature of the patient-physician relationship," said Lau.

"It takes no skill to kill somebody, but it takes great skill and compassion to help someone who is struggling."

In nearby Brockville, Ont., 115 kilometres south of Ottawa, family physician Dr. Gerry Ashe estimates about five per cent of his patients require palliative, or end-of-life care.

Over 37 years of practising medicine, Ashe said few patients have inquired about ending their life early, so he believes increasing access to that option with the help of a physician won’t lead to a jump in requests.

"The vast majority of people don’t want to do it. They’re not interested in [dying early]. As human beings, our default setting is to stay alive as long as we possibly can," Ashe said.

"I have seen individuals who suffer greatly and do not wish in any way to shorten their lives."

Ashe said he has one legal option to offer his dying patients, a medical procedure called palliative sedation, which sedates individuals during their final days when symptoms such as pain, breathlessness or delirium are intolerable.

"I’ve had difficulty understanding why we can provide a patient the means to die a very slow death over 10 to 14 days compared to one that would be rapid over 15 minutes to three-four hours, with your family there," he said.

On Wednesday, CBC Ottawa’s Steve Fischer talks to one family about a 92-year-old man’s desire to die through starvation without the option of physician-assisted suicide.