The Ottawa Senators have turned to the Toronto Maple Leafs for their new head coach. 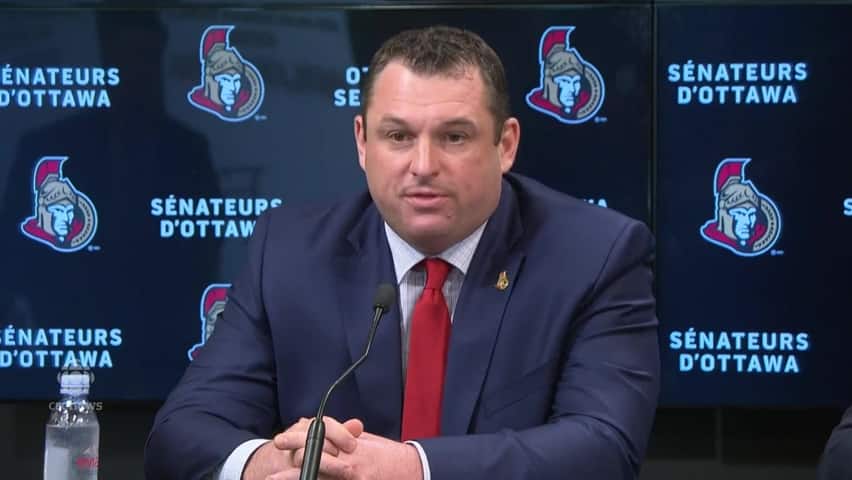 The Ottawa Senators have turned to the Toronto Maple Leafs for their new bench boss.

There's going to be a lot of young players, different personalities to deal with, but I can't wait to get started.- D.J. Smith

"D.J. Smith is a winner. He's also a teacher with the foundation to develop and deliver to the fans of the Ottawa Senators the team that they deserve," general manager Pierre Dorion told reporters Thursday morning.

"[He] is a great communicator and an exceptional strategist. His passionate approach, coupled with his ability to teach the game, is exactly what we were looking for throughout the process."

Dorion said seven other "great" candidates were interviewed for the job.

At his introductory news conference at Canadian Tire Centre Thursday, Smith promised to hold the players accountable as they grow as a team, while maintaining a fun atmosphere.

"I think anyone that's been around me knows that's what I am going to ask of them, but I am also going to give that from myself."

Smith said he went to French school growing up in Windsor, Ont., and promised to shake the rust off his French as he gets going. He called the job an "unbelievable opportunity" to prove his capabilities as a coach.

"This is the perfect situation for me. I love to develop players, I love to make players better … and I feel like I can get the job done," he said.

"I'm excited for this challenge. There's going to be a lot of young players, different personalities to deal with, but I can't wait to get started."

Smith, 42, was brought into the Leafs organization by coach Mike Babcock in 2015 after Babcock inked an eight-year contract.

Before that, Smith led the OHL's Oshawa Generals to the 2015 Memorial Cup and was an assistant coach in his hometown when the Windsor Spitfires won back-to-back national championships in 2009 and 2010.

He played 45 NHL games between 1996 and 2003 with Toronto and Colorado, spending the rest of his professional playing career in the American Hockey League.

His 2002-03 Colorado Avalanche teammate Patrick Roy was also reportedly in the running for the Senators job, as were Crawford and former Senators coaches Rick Bowness and Jacques Martin.

Former Senators coach Guy Boucher was fired in March during his third season on the job.