The Diefenbunker Museum and Ottawa's Escape Manor are creating what they're calling the world's largest escape room. 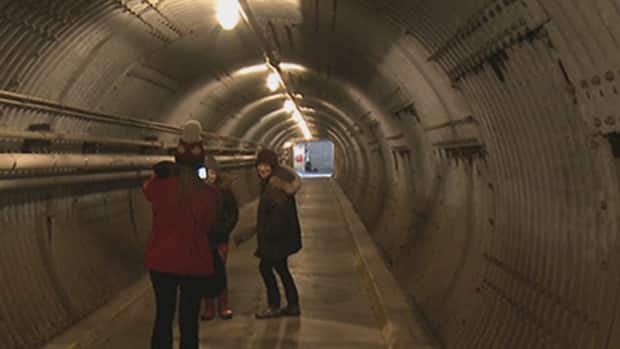 Escape the Diefenbunker Museum, and live to tell

5 years ago
1:56
The fun starts in March when the former federal government's nuclear attack safehouse will morph into what's being called the world's largest escape room 1:56

Imagine this: You're on the final tour of the day at the Diefenbunker Museum when you and a group of friends duck into a room to hide because you want to spend the night.

You quickly realize the museum isn't a museum at all — it's the headquarters of a spy organization that's planning an attack that very night.

You've got to find the communications room, stop a launch sequence and transmit a red alert to the public before escaping.

It may sound like a pretty extreme way to teach people about the Cold War, but that's what the Diefenbunker Museum in the rural west Ottawa community of Carp and an Ottawa company are hoping to do.

Starting in March, the third floor of the former federal government's nuclear attack safehouse will morph into what they're calling the world's largest escape room with the help of Escape Manor, a company that designs scenarios in which groups of people have to find clues and solve puzzles to get out of locked spaces.

What exactly does an escape room have to do with teaching lessons about the Cold War? More than you might think, according to the museum's executive director.

"I think the real purpose of the Diefenbunker is to teach young people the lessons of the Cold War; that's conflict resolution, non-violence, peace-building, diplomacy," said Henriette Riegel.

"And so what the escape room is asking people to do, it's an interesting and unique way [to do it], but it comes down to the core values of asking people to solve some pretty big problems by working together."

Billy Rogers, one of the owners of Escape Manor, said the collaboration with the 100,000 square foot museum was a dream come true.

"We always thought it would be neat to do something on a grandiose scale like this," he said.

"Just walking into those front doors, we knew right away that it was going to be an awesome opportunity to do something really cool and really unique, not just for Ottawa but for escape rooms in general."

Diefenbunker escape room spots are filling up but work is underway to add more hours.

The sessions take place starting March 10, after the museum closes on Thursday to Sunday nights, with four sessions per night.

The Diefenbunker was built from 1959 to 1961 as a place for government and military leaders to go if Canada was under nuclear attack.