1 year ago
0:59
Dr. Paul Roumeliotis, medical officer of health with the Eastern Ontario Health Unit, says mental health supports will be available to passengers who are quarantined at the NAV Centre in Cornwall. 0:59

The plane, which landed just after 2 a.m. ET, was carrying 129 passengers from the Diamond Princess cruise liner that was quarantined in Yokohama, Japan, since early February due to an outbreak of COVID-19, the novel coronavirus first reported in December.

In total the plane carried 151 people, including crew and staff.

Repatriated passengers tested negative for the virus on board the ship and were screened again in Trenton before boarding five buses destined for the NAV Centre in Cornwall to start the quarantine, according to Health Canada officials.

Later on Friday, one person was identified for further testing and sent to a clinic located within the quarantine area at the NAV Centre for tests, said Rhonda Kropp, emergency manager for the Public Health Agency of Canada.

"We had on individual who was feeling unwell," Kropp said at a news conference late Friday.

"Because of the abundance of caution we're taking, we decided we should take a sample, and that sample is currently being tested."

The person undergoing tests is "doing fine," she said, and is staying in their room.

The flight crew will also be quarantined, federal public health officials said, but the length of quarantine could be shortened depending on the level of risk.

If anyone tests positive for COVID-19, people who share a room with them, like family members, may have to undergo further tests but will not necessarily have to stay in quarantine longer.

Anyone who tests positive will have to wait until they feel better and test negative twice before they're allowed to leave, said Kropp.

WATCH: Here's what the rooms at the NAV Centre look like 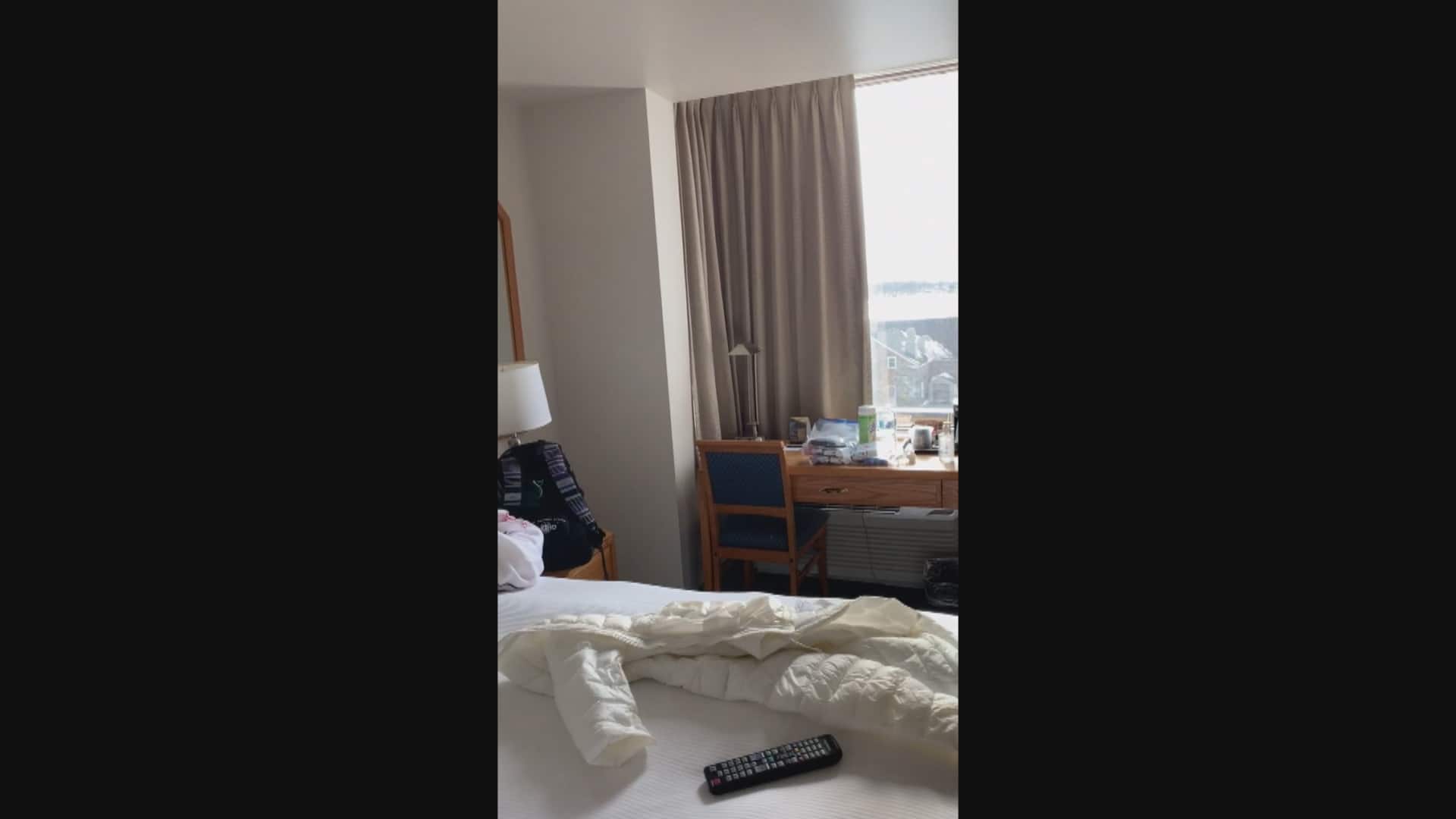 Here’s what the rooms look like at the NAV Centre

1 year ago
0:20
Trudy Clement, who was on the Diamond Princess cruise ship and arrived in Cornwall Friday morning for a 14-day quarantine, sent CBC News this video of her room at the NAV Centre. 0:20

"These individuals have been cooped up in a cruise, many of them without windows," he said. "So we are offering on-site mental health services." 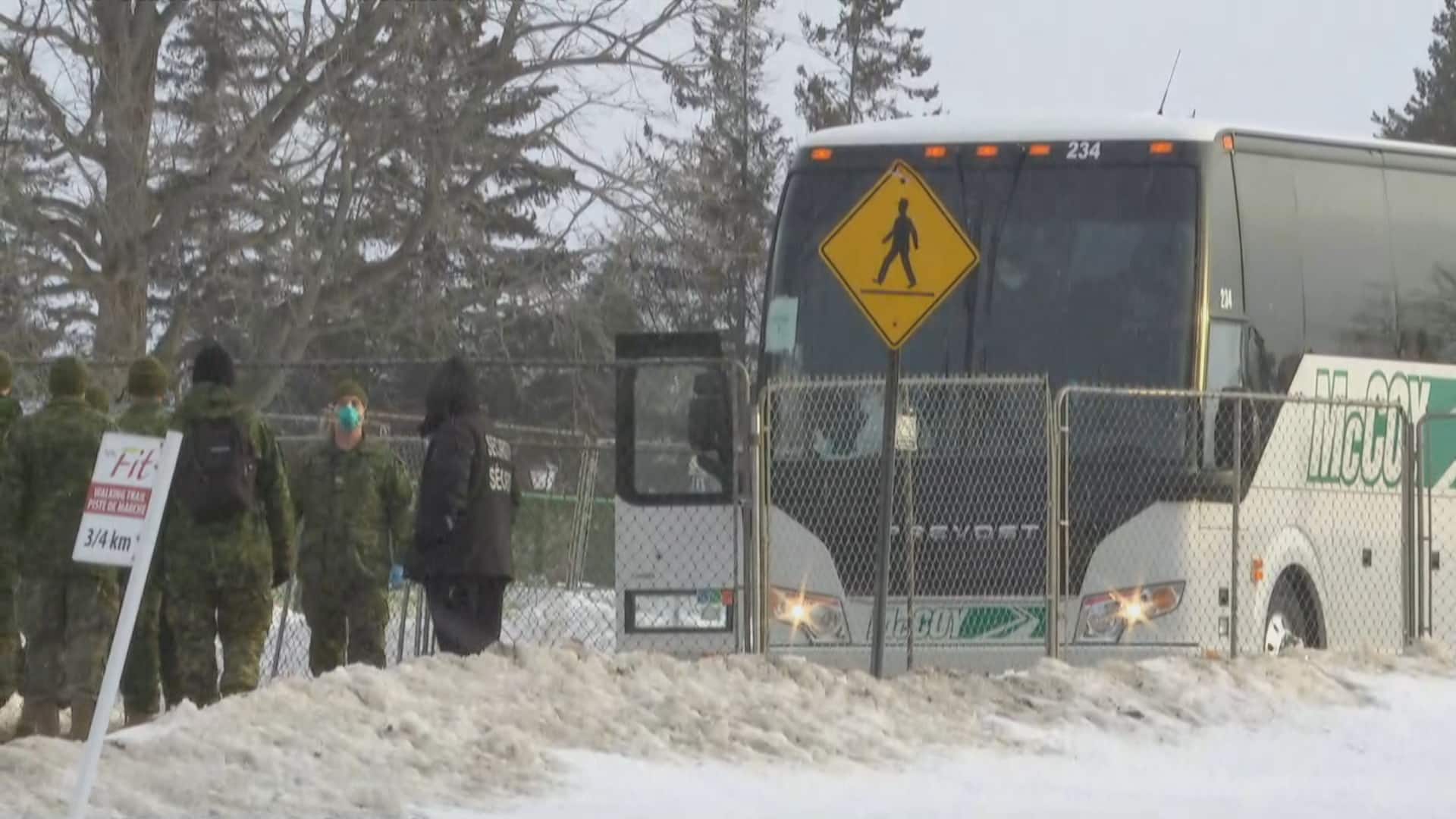 1 year ago
1:36
The first of several buses carrying Canadians who were on the Diamond Princess cruise ship in Yokohama, Japan, has arrived in Cornwall. 1:36

Life on the cruise ship

Lolita Wiesner, who was on the Diamond Princess to celebrate her anniversary, said medics boarded the plane shortly after it landed at CFB Trenton to take passengers' temperatures and deliver meals.

Forty-seven Canadians who were on board the ship tested positive for COVID-19. Those passengers were not allowed to board the charter flight, and are in isolation at Japanese health facilities.

On Friday, the Canadian Red Cross announced it was sending a team to Japan to offer support to the Canadians being treated there.

Healthy Canadian passengers who choose to leave Japan by their own means will also face a mandatory quarantine of up to 14 days upon arrival in Canada, Health Minister Patty Hajdu said Thursday. 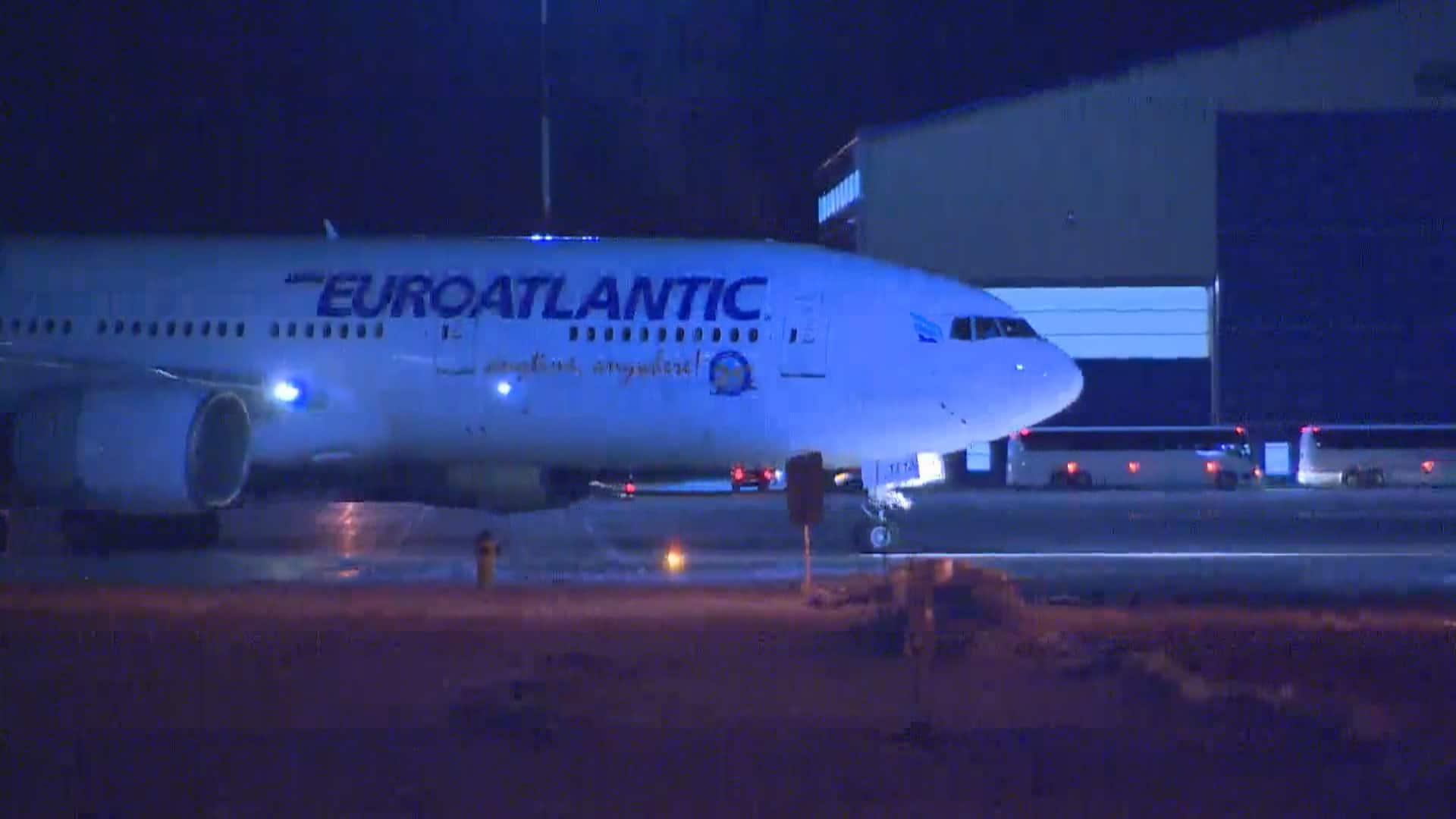 As the quarantine in Cornwall begins, another group of people was due to be released Friday from separate quarantine in Trenton. Canadians evacuated from Wuhan, the Chinese city at the heart of the outbreak, were quarantined at Yukon Lodge after returning to Canada on Feb. 7.

The NAV Centre is a hotel, conference and community centre. It has previously been used by the federal government as an emergency shelter.

Some Cornwall residents, including the mayor, were surprised and expressed concern about hosting the cruise ship passengers at a facility that's open to the public and not typically used for medical purposes.

Bernadette Clement, the mayor of Cornwall, changed her tone Friday, saying she has received more information and welcomes the guests. Sitting beside Kropp, Roumeliotis and a spokesperson for the NAV Centre, Rebecca Hickey

"Our hearts are with you, and we hope the quarantine period passes quickly and as comfortably as possible," she said in a statement.

The majority of those passengers are over the age of 60, Clement said, but range in age from 20 to 80.

"We know that you find yourselves in extraordinarily difficult circumstances and that it is impossible for us to imagine how we might feel if we were in your shoes," she said. "But our hope is that you are relieved and uplifted to be on Canadian soil."

Representatives from the Public Health Agency of Canada, which is handling the operation, said no one under quarantine will be in contact with the general public.

People under quarantine will have some time outside their rooms but must wear gloves and a mask at all times.

An outside area at the NAV Centre is protected by a double fence, which prevents members of the public from coming within two metres of people under quarantine.

The Eastern Ontario Health Unit said the section of the NAV Centre that will be used is isolated and has its own ventilation system separate from the rest of the complex.

The risk to the general public is extremely low, Roumeliotis said.

Officials are in touch with the Children's Hospital of Eastern Ontario and the Ottawa Hospital should anyone require hospital care, he said. Cornwall is 75 kilometres southeast of Ottawa.

An ambulance will remained stationed at the NAV Centre should anyone need immediate assistance, Roumeliotis said.