For Derick Brassard, playing for the Ottawa Senators is a sweet homecoming of sorts, and he says he's eager to help the team win in front of friends and family this upcoming season.

For Derick Brassard, playing for the Ottawa Senators is a sweet homecoming of sorts, and he says he's eager to help the team win in front of friends and family this upcoming season.

The 28-year-old centre met the Ottawa media for the first time Friday since he was acquired in a trade from the New York Rangers in July.

The Gatineau native says coming here is a "proud moment," and he's "really, really, excited" to play for the Sens.

"Just the fact that I'm gonna play in front of my friends and my family, I think it's gonna give me another edge to my game," said Brassard. "And I think I'm in the prime of my career right now."

He admits when he first learned of the trade by a text message from former teammate Martin St. Louis, he was shocked.

"I had no sense I was gonna leave New York, but it is what it is, and now it's a new chapter in my life and a new challenge for me personally," he said.

But now he's looking forward to meeting his new teammates and developing a winning chemistry with the new NHL season just around the corner. As a left-handed centre, he wants to provide wingers with more scoring opportunities as a top-six forward.

"We haven't had a left-handed centreman play-making type for quite a few years. I think he brings experience. He brings a love and passion to the game."

Dorion believes the hometown element will be a positive factor too. 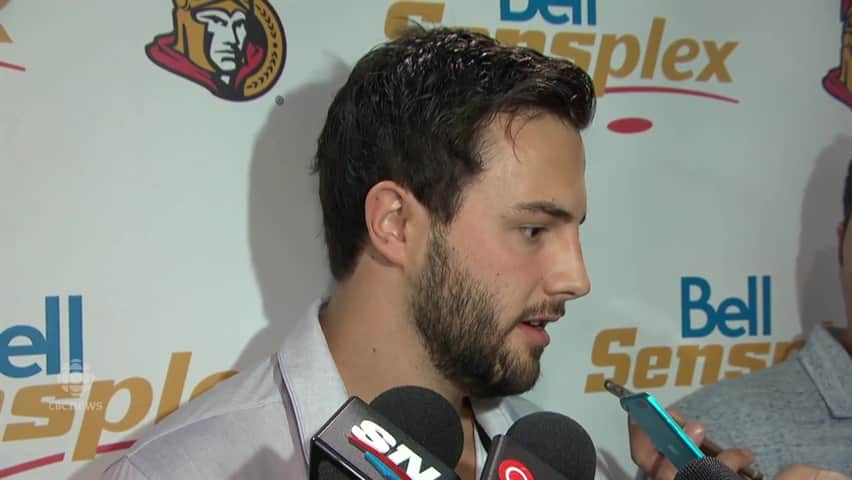 4 years agoVideo
0:26
Derick Brassard is excited to play in front of friends and family as a new member of the Ottawa Senators 0:26

Brassard will wear number 19 — a jersey not worn in Ottawa since the Jason Spezza era. Going forward, he believes the Sens can create "something special" this season.

"We're a big team. We're tough. We have a lot of speed and skill, and we have a good goalie," he said.

"So if we put everything together and we're confident and take one game at a time, I think this team could achieve a lot."