The company in charge of picking up residential waste and recycling in a large part of Ottawa's west end is blaming ongoing collection delays on a "catastrophic" fire that destroyed eight of its trucks.

The company in charge of picking up residential waste and recycling in a large part of Ottawa's west end is blaming ongoing collection delays on a "catastrophic" fire that destroyed eight of its trucks.

West-end residents say that since May, Waste Management crews have regularly failed to collect household waste, recycling and composting on the appointed collection day.

We pay taxes, we pay all our bills, we pay everything, but unfortunately the garbage is still there.- Elizabeth Fanganiello, Kanata resident

Standing next to a pile of uncollected waste at the end of her driveway, Kanata resident Elizabeth Fanganiello said she's losing patience with the city.

"Look at that! All the garbage along the street. It's frustrating," Fanganiello said. "Somebody needs to do something. We pay taxes, we pay all our bills, we pay everything, but unfortunately the garbage is still there."

The affected wards appear to be Kanata-South, Stittsville and West Carleton-March.

Residents say in most cases, the garbage trucks show up the next day, but they say that's still leaving a mess with trash blowing around the streets, and a smell with the summer sun beating down on exposed green bins.

In a statement late Thursday afternoon, Waste Management, the contractor hired by the city to collect curbside waste in those wards, apologized for the disruption.

"We did experience a catastrophic truck fire where we lost [eight] trucks and we are redeploying assets. We ask for patience as we work to provide service to the residents of Ottawa," the company said. 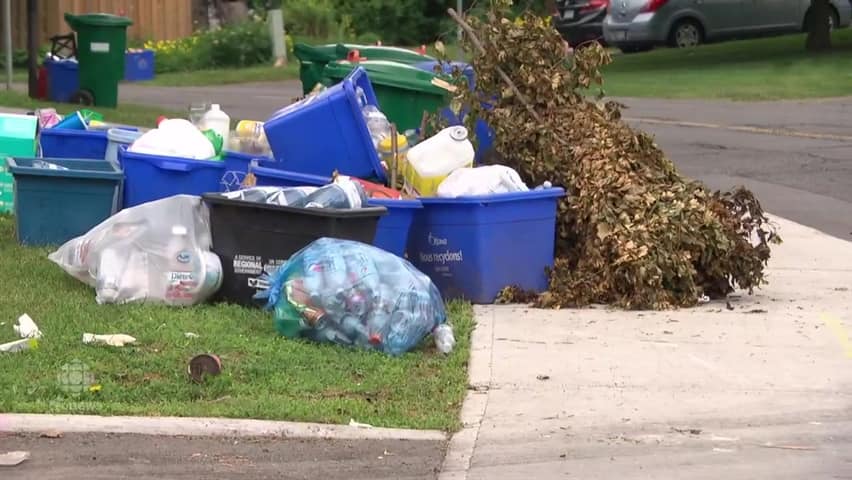 2 years ago
0:52
Elizabeth Fanganiello and Tom Lowrey say curbside pickup in the neighbourhood has been sporadic, leaving refuse piled along the street for days on end. 0:52

The fire occurred June 15 at Waste Management's facility on Westbrook Road in Stittsville.

In a written response, the City of Ottawa's director of solid waste services, Marilyn Journeaux, said the city is actively working with the company to meet service standards, and the contractor is implementing additional measures.

The councillor for Stittsville said he's heard the complaints from residents and is demanding action.

"I completely understand the residents' frustration," Coun. Glenn Gower said. "It's not the level of service any resident or anyone at the city expects, and I know city staff are working hard to get the contractor to pick up the slack and get this fixed."

Until the problem can be resolved, Gower is asking residents to leave their curbside waste out until it's collected, and to call 311 if the delay lasts more than a day.