The bail conditions of a man accused in the hit-and-run that killed cyclist Andy Nevin this summer have been relaxed, allowing him to drive for work-related purposes. 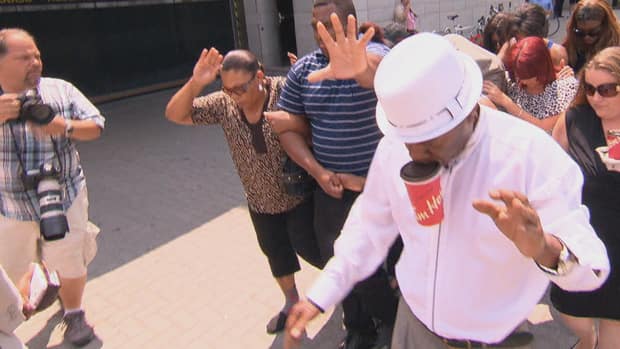 The man charged in the June 2015 hit-and-run that killed cyclist Andy Nevin has been allowed back behind the wheel as part of relaxed bail conditions.

Earlier this month, a judge ruled that Deinsberg St-Hilaire, 40, a landscaper and a snowplow driver, can operate a narrow selection of vehicles for his work.

"He has to provide for his family — and there is always the presumption of innocence," said Trevor Brown, St-Hilaire's lawyer.

Nevin's brother told CBC News he wasn't aware of a hearing had been scheduled until after the bail conditions were changed.

"Of course we should be there in the crowd so the judge can look at our face when he let's this guy have his licence," Brent Nevin said. "My brother's kids needed their father to support the family. I don't have sympathy for this guy needing to drive."

Andy Nevin, 39, was the father of two teenage boys.

Ottawa police pleaded for the owner of a 2004-06 white Ford F-250 or F-350 pickup truck to come forward after Nevin was killed while cycling at the intersection of Leitrim and Albion roads.

Investigators later seized a white truck belonging to St-Hilaire that had signs of damage.

St-Hilaire was charged with obstructing justice and failing to remain at the scene in July. In December, he was additionally charged with dangerous operation of a motor vehicle causing death.

Brent Nevin said he and his family members have seen St-Hilaire driving through their neighbourhood in the same white truck that allegedly hit and killed his brother.

"It breaks my heart," he said. "He shouldn't be driving — let alone in the same truck."

Original bail conditions from July required St-Hilaire to surrender his driver's license and passport, and live with his mother.

On Dec. 7, his defence team successfully convinced a judge to let him drive certain vehicles for work purposes, including a skid steer, a mini-backhoe, and a pickup truck that can be fitted with a snowplow.

St-Hilaire also no longer has to live with his mother, although his passport remains confiscated.