A cyclist is dead after being struck by a Tomlinson construction truck and pinned under its back wheel at the intersection of Lyon Street and Laurier Avenue West on Thursday morning. 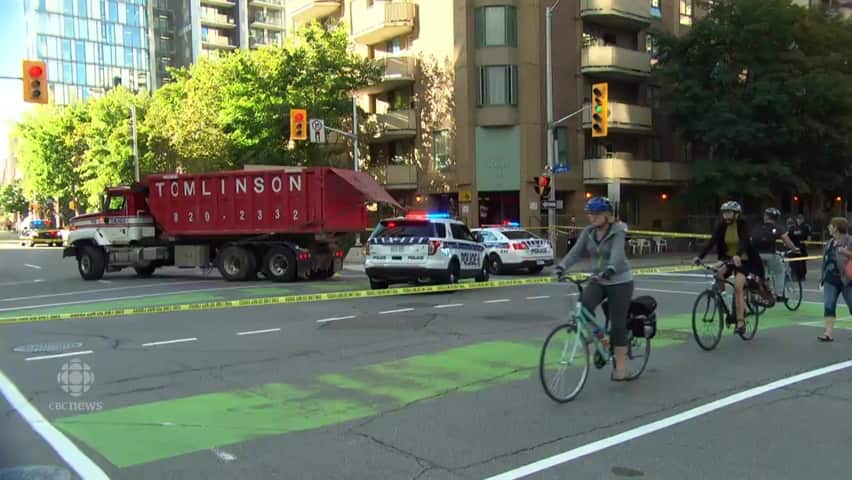 4 years agoVideo
0:30
A cyclist in her 20s was struck and killed by a construction truck on Thursday morning in downtown Ottawa. 0:30

A cyclist is dead after being struck by a Tomlinson construction truck and pinned under its back wheel at the intersection of Lyon Street and Laurier Avenue West on Thursday morning.

Family friends have identified the 23-year-old woman as Nusrat Jahan, a Willis College student and daughter of a diplomat working for the Bangladesh High Commission in Ottawa.

It appears the truck driver was heading east on Laurier and was turning right to head south on Lyon when the crash happened at about 7:45 a.m.

There are segregated bike lanes on Laurier Avenue West.

Melanie McGovern, who works in a building close to the crash site, heard the truck braking and ran outside.

"I heard a big brake, like very loud, and I heard someone screaming. So I just ran and came outside, and we saw that poor lady," she said.

Police are asking any witnesses to come forward to help with the investigation.

Tomlinson will conduct own investigation

Tomlinson spokesman Dale Harley said in an interview Thursday that he can't go into specifics about what happened due to the ongoing investigation.

But he did say the company is co-operating with police and will also conduct its own investigation.

"We're co-operating fully with the authorities. It's an unfortunate occurrence, and condolences to the family and friends," he said.

"It's one of those things that no one likes to see, and we will be conducting, obviously, our own investigation afterwards to try and get to the bottom of this."

"It's definitely got more dangerous since those concrete bike lane barriers went up. It's funnelled the street so the cars are a little more cramped, but the big problem is right here," he said, looking at the crash site.

"When you try to go through the intersection and you've got the green, the vehicles are turning right, and they have to turn wider. I've just noticed that since these lanes went up, that there's been a lot of close calls with me. The vehicles, they just don't look when they're turning right and there's a cyclist coming. And this is what happens."

Laurier was closed to traffic in both directions for several hours as police investigated but was reopened before 2 p.m.

Coun. Jeff Leiper called the fatality "unacceptable" and asked residents to meet him and Coun. Catherine McKenney at City Hall's Marion Dewar Plaza at noon Thursday "to express our anger."

'I appeal to drivers to be careful,' councillor says

Just before the rally began, McKenney told reporters she felt a combination of shock and anger and worry when she learned of the collision.

"I was horrified, I was frightened. I know at least a dozen people who would have been on the Laurier bike lane at that time this morning, as many residents do, so it was disbelief and sadness and frustration and anger ... all together," she said.

There will always be human error, but she said it is possible for streets and rules to be designed in ways that prevent any accidents from occurring. For example, there's no law requiring side guards on trucks in Ontario, even though many advocates say they could save lives.

Leiper said it was "tragic" that a cyclist died while using city-built infrastructure intended to keep cyclists safe.

During the rally, he also said more should be done to separate cyclists and pedestrians from vehicles — and urged rally-goers to make their voices heard about spending priorities to make that happen.

"I don't know what happened this morning, but would not mixing our truck route with our main cycling route help save lives?" he asked to applause. "Would investing in safe cycling infrastructure not just down one corridor but the entire city help save lives?"

McKenney also said people should resist the urge to lay blame but emphasized that it's time to stop normalizing the death of pedestrian and cyclists, and instead recognize that these fatalities are preventable.

"I appeal to drivers to be careful. It's not about blame. I think that if we just look for blame, it won't change. We have to look for what can be done to stop it from happening."