People living near the section of road where a 13-year-old boy on a bicycle was killed on Tuesday say the overpass isn't safe, and are demanding change.

Similar problems exist at other overpasses across city

People living near the section of road where a 13-year-old boy on a bicycle was killed on Tuesday say the overpass isn't safe, and are demanding change.

The boy died after he was struck by a car just before 5:30 p.m. near the westbound on-ramp to Highway 174 on Jeanne d'Arc Boulevard.

The highway overpass is a busy destination for pedestrians, with many trying to access major bus stops on either end.

Brittany Dugan has to cross the on-ramp to catch her bus every day. 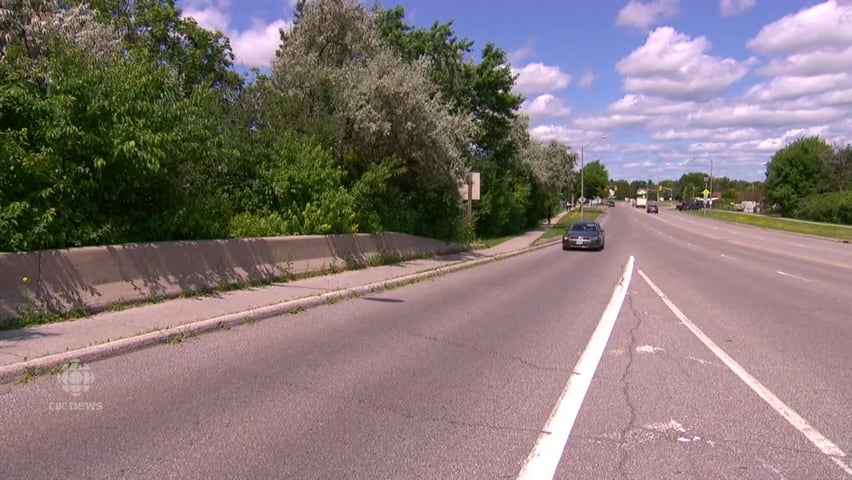 Pedestrians say intersection where 13-year-old was struck is 'unsafe'

1 year agoVideo
0:29
Brittany Dugan, who crosses the on-ramp every day to catch a bus, says it's not clear whether pedestrians or drivers are supposed to yield. 0:29

"It's not clear whether the car has to stop," Dugan said.

She's complained before about how the crossing at the on-ramp is poorly marked.

It's difficult for drivers to see pedestrians, and it's not clear whether pedestrians or drivers are supposed to yield, she said.

People tend to run across the ramp, trying to outrun cars speeding up as they get on the highway.

"I just think there needs to be a change here because it's not safe," Dugan said.

'The time to do it is yesterday'

Therese Bosse feels the same. The mother of two said she wouldn't let her kids cross the on-ramp, but a lot of kids do.

Some take the route to get to nearby schools, and others use it to get to the recreation centre.

The investigation into the crash is ongoing, and Orléans Coun. Matthew Luloff said it needs to take its course.

But once that's done, Luloff said the city needs to move decisively to make changes — especially since the bus stop on the overpass is the future site of an LRT Station.

"I think the time to do it is yesterday," Luloff said.

"I think we need to be doing everything that we can to make sure our vulnerable road users like our pedestrians and cyclists feel safe on our roads."

There are similar situations on highway overpasses all over the city, said Somerset Coun. Catherine McKenney, and those need to be addressed too.

"We know that slip lanes, where a driver can take a very fast turn onto a street, onto a roadway, are dangerous and encourage you to speed up," she said.

City council will consider a new road safety action plan in the fall, which McKenney hopes will include a viable plan to make roads safe for everyone and prevent the "rash of deaths" Ottawa experienced this summer.

The 13-year-old boy is the second cyclist to die on the road in Ottawa this year.

"It's become an epidemic and I think collectively as a council we all have to take responsibility," McKenney said.

Officers are asking anyone who witnessed the crash on Jeanne d'Arc Boulvard or has any information to call the collision investigation unit at 613-236-1222, ext. 2481. Anonymous tips can be submitted by calling Crime Stoppers toll-free at 1-800-222-8477 (TIPS).