Forty-seven cows are dead after fire tore through a barn on Gréber Boulevard in Gatineau early Wednesday morning.

Passerby woke up farmer to alert him to flames, saving majority of herd 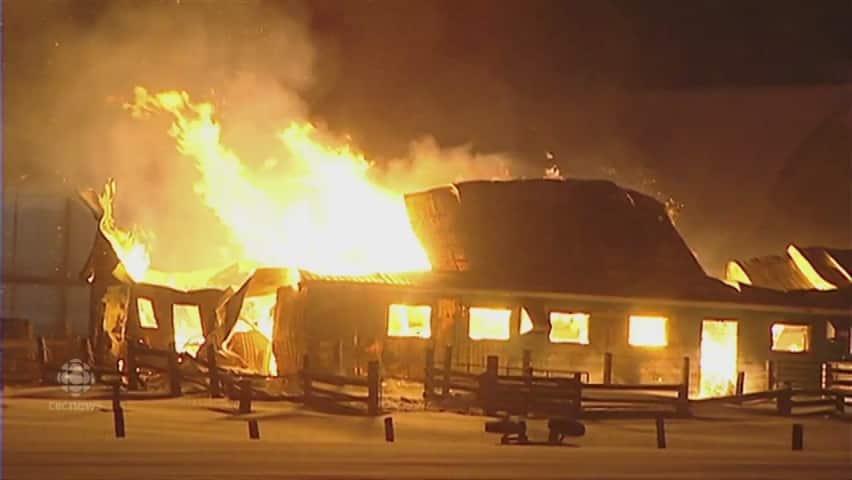 4 years ago
0:37
Fifty cows are dead, including 20 calves, after a fire tore through a barn in Gatineau overnight. 0:37

Forty-seven cows are dead after fire ripped through a barn on a Gatineau dairy farm early Wednesday morning.

Firefighters got the call at 12:24 and rushed to 1247 Gréber Blvd., home of Scullion Farm.

According to Derek Scullion, 186 cows were housed in three barns when the fire broke out.

Scullion said he was drifting in and out of sleep in his living room chair when a passing motorist pulled into his driveway and woke him up.

"He flashed his lights and honked his horn. I went to the door and I said, 'What's wrong?' He said, 'Your barn's on fire.'"

Scullion hurried over to the flaming barn, but quickly discovered he couldn't get inside through the main entrance. He then tried to enter through the two adjacent barns.

"I was able to make my way to the second barn, and I could see that the cows had died from smoke inhalation. I realized how bad things were and I had to work at getting the cows out of the rest of the barns."

They are important to you. They all have names. Sounds strange but they are part of the family.- Derek Scullion

"Thankfully the firemen, the police and my brother and some neighbours, they all came to help. We were able to save 139 head of cows."

Thirty-two adult cows and 15 calves died in the flames. No humans were injured.

"For every farmer with animals, it's their worst nightmare," said Scullion. "You work all the time with them, they are important to you. They all have names. Sounds strange but they are part of the family."

According to Derek's brother Dale Scullion, one of the rescued calves was given oxygen by firefighters because it was having difficulty breathing.

As for the passerby who alerted him to the fire, Derek Scullion said he never got a chance to thank the man.

'It's not going to be easy'

For much of Wednesday morning, friends and neighbours assisted the brothers with the cleanup.

Dale Scullion said he's been overwhelmed by the offers of help. "Lots of good friends. I have phone calls and text messages from everybody saying, 'If you need help, we'll be there.'"

The Scullion family has owned the farm on Gréber Boulevard since 1919 and has watched the surrounding land undergo significant development including suburban homes and strip malls.

Dale Scullion said the family will recover from the fire, but it won't be easy. "It's going to be a lot of work."

In the meantime, a mobile milking system is being delivered to the farm to deal with production from the surviving animals.

The cause of the fire is under investigation. A damage estimate wasn't immediately available.