The struggle to strike the right COVID-19 balance

Public health experts are trying to find the balance between keeping both COVID-19 transmission manageable and life as normal as possible — but it hasn't been easy.

'It's in our power': Dr. Vera Etches makes a plea to flatten transmission, keep society open

Almost exactly six months ago, Ottawa Public Health reported 25 new cases of COVID-19 and two new deaths. On Saturday, we were told this city lost two more people to coronavirus — the death toll is closing in on 300 — and 96 more people had tested positive.

And yet, back in April, schools and all non-essential businesses were closed, public transit was scaled back and we weren't to leave our homes unless absolutely necessary. Today, with the daily number of cases breaking records, there are far fewer restrictions.

Despite having sounded the alarm that our case trend is heading dangerously in the wrong direction, Dr. Vera Etches is looking at closures only as a last resort.

Why? Because as she's said, this pandemic has devastated thousands economically, mentally and socially.

People have lost their livelihoods. Anxiety is soaring. The Ottawa Board of Trade is including a session on mental health for small business at a summit later this month. During the lockdown, people found themselves trapped in abusive situations.

"There is significant harm to [a lockdown] and it can be avoided if we individually do our part," said Etches. "The power is in our hands." 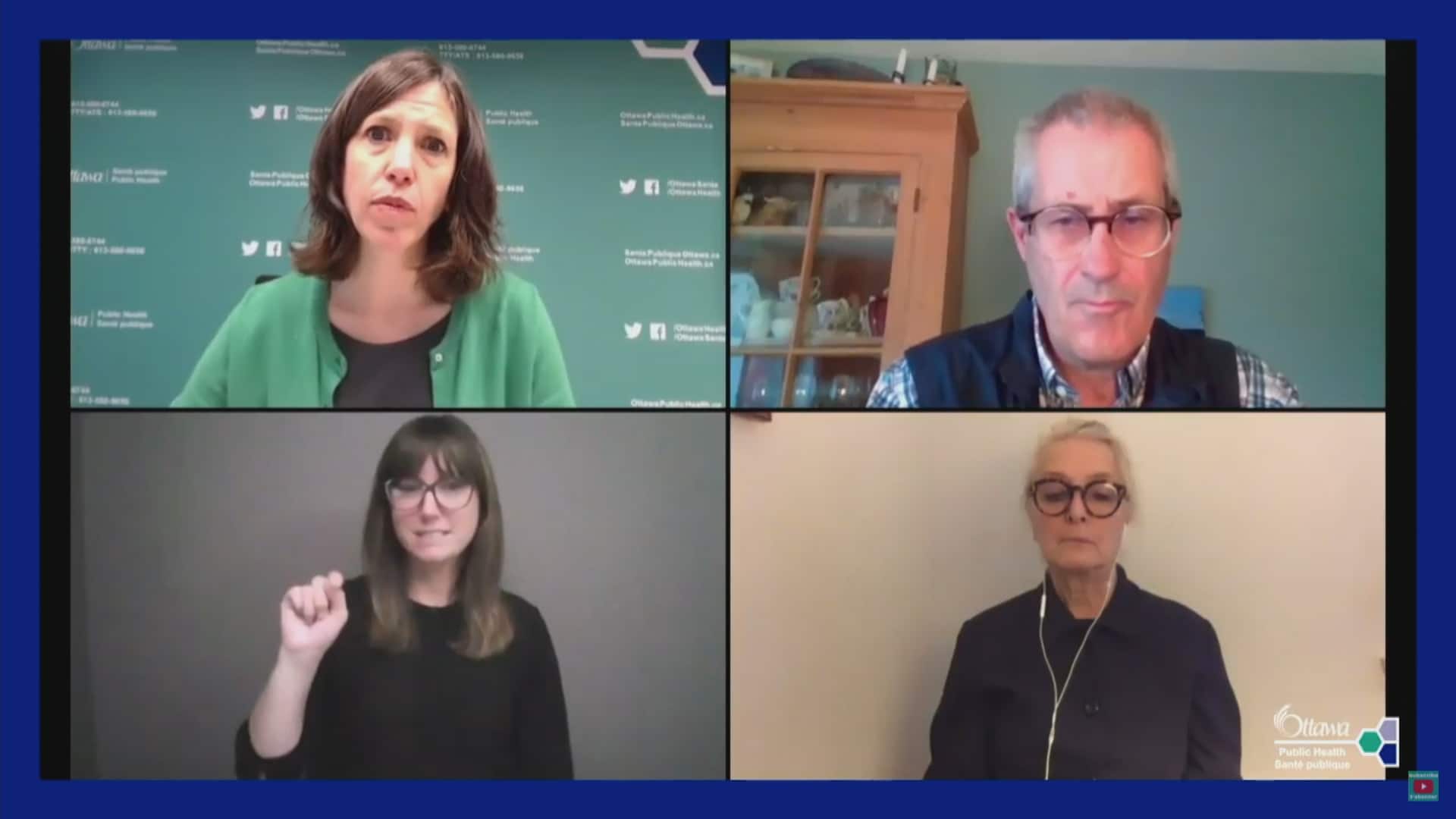 4 months agoVideo
0:59
Ottawa’s medical officer of health said hospitalizations have doubled over the past 10 days, and said the pressure on the health-care system is coming from transmission that occurs when people are in close contact. 0:59

'The economy is also about health'

When we see record numbers of cases, when we see the tragic effects of COVID-19 re-entering some long-term care homes like West End Villa and Laurier Manor, it may seem obvious that we should go back to lockdown, at least for a while.

But that's a short-term solution to a problem that could continue for years, says one expert, and we need to live as normally as possible while keeping transmission manageable.

"The economy is also about health," said Dr. Vivek Goel, who is, among other things, a professor at University of Toronto's school of public health and an expert member of the federal COVID-19 Immunity Task Force.

When COVID-19 first came on the scene, little was known about how it spread or how to treat it. No one had ever heard of social distancing, and few wore masks, which then weren't recommended.

The only option to prevent a tragic situation as was seen in places like northern Italy was a complete shutdown.

Now, said Goel, public health officials and government leaders are trying to "balance all these different health risks" in order to bring about "optimal health outcomes."

"[We want to] control COVID to keep it from getting to people that are vulnerable, but not shut ourselves down to the point where the consequences will be much worse than the disease."

That doesn't mean a full-steam-ahead attitude from leaders, however. Goel warns that in the new reality, everyone has to have contingency plans, whether it's for a university seminar class or a rec hockey game.

"You could have it cancelled the day before based on changing circumstances," he said.

There are signs that we can still turn the situation around.

While the daily case numbers are on the rise, and a cause for serious concern, they don't paint the entire picture.

Take hospitalizations, for example. In April, OPH was reporting about 45 people with COVID-19 in hospital, with 12 in intensive care.

On Sunday, there were 27 people hospitalized, five of whom were in ICU.

We know that the rise in cases is happening largely among people under 40, particularly those in their 20s. While some younger people can still become seriously ill, the rates at which they are hospitalized is much lower than for older people.

But as the total number of cases increases, eventually so too will the number of hospitalizations. They've already doubled in Ottawa in the past two weeks, adding considerable stress to overcrowded and understaffed hospitals.

"We do need to control it, but we don't necessarily need to do the things that we did in March," said Goel.

One thing we definitely shouldn't do that we did in March is close schools — and Etches says that at least so far, the data supports this.

The current schooling setup isn't without major challenges, and it's put a strain on the testing and contact tracing resources. But, according to Etches, school isn't where COVID-19 transmission is happening.

While we've seen coronavirus in about 80 schools locally, OPH has only been able to identify nine instances where one of those cases passed it onto a close contact in the school.

"That could change. It's early days," said Etches. "What we're seeing more is the introduction from outside the school."

As the numbers are rising, especially among young people, the call to shut down restaurants and bars is also getting louder.

For weeks, OPH has said the spread is coming from social gatherings in private homes, not bars and restaurants. But with more than half of the people testing positive in the last two weeks not knowing where they contracted coronavirus, restaurants and bars might be areas of concern.

This is a problem, especially for people working in these establishments, said one expert who'd like to see restaurants and bars shut for now.

"Someone who's working as a server is going to see dozens or maybe hundreds of people," said Colin Furness, an infection control epidemiologist and an assistant professor with the University of Toronto's faculty of information.

It's important to note that Etches has not ordered any bars or restaurants to close due to a COVID-19 outbreak. She said she's leaving any possible restrictions on the dining sector to the province.

Her main message is for people to socialize only with their households, and perhaps one or two additional people like a caregiver or a grandparent — a recommendation that the province has finally endorsed, if rather vaguely.

Ontario officials were questioned today about whether one should celebrate Thanksgiving with their parents, who live outside of their household.<br><br>Here was the answer. <a href="https://t.co/FVyVr8hjYH">pic.twitter.com/FVyVr8hjYH</a>

Whether we actually heed all the messages we're so tired of hearing — wear a mask indoors, wash your hands frequently, stay home if you don't feel well, strictly limit your contact — won't be known for a week or two.

But if we don't act now to flatten the transmission in the coming weeks, the next message we'll be hearing will be much more dire.

"I hope people can take that to heart and choose to do that," said Etches. "Rather than potentially getting into territory where there are more closures again."