Heatherington residents rally for an end to gun violence

The south Ottawa community gathered Sunday to address and discuss violence in the neighbourhood, only a few weeks after the shooting death of Mouhamed Serhan. 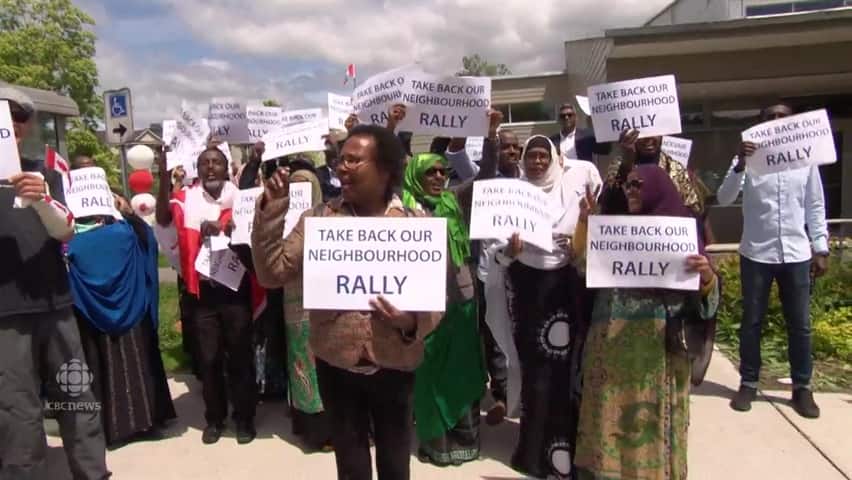 'Save our neighbourhood,' Heatherington residents chant to end gun violence

2 years agoVideo
1:03
Heatherington residents held a rally over the weekend for an end to gun violence in their community. 1:03

Mahad Mohamed knows the heartbreak of losing someone to gun violence.

Mohamed's nephew was shot and killed about 10 years ago, and his south Ottawa community of Heatherington is now grappling with a similar loss after 24-year-old Mouhamed Serhan was gunned down last month.

Serhan's brother Hamzeh was also shot to death in 2017. He was only 20 years old.

Mohamed organized a rally and community meeting Sunday at the Albion Heatherington Recreation Centre to address violence and other issues facing the community.

Many people held signs that said "Take back our neighbourhood."

'Unless we do something … it's not going to stop'

"Two nights ago a shooting happened in [south Ottawa] and then it becomes normal. [But it's] not normal," said Mohamed. "We have to come together."

There have been more than 30 shootings in Ottawa this year, including one this weekend just south of where Sunday's rally took place.

Ali said gangs offer a sense of community that may seem attractive. Many people in Heatherington are already vulnerable, she added, including newcomers and refugees who may be suffering from post-traumatic stress disorder.

"I'm really concerned," said Ali. "Unless we do something about it, it's not going to stop, this violence."

Lucie Lamarche lives in a seniors' building in the community, and said she wants to work with her neighbours to make Heatherington safer.

"A lot of seniors are scared to even come out of the building," said Lamarche. "We want to be helping the community … we're all in this together."

Awaleh said the problem can't be solved overnight, but he's hoping communities will come together with police and the government to address gun violence.

"[People in ] the neighbourhood, they are not happy," said Awaleh.

Inoua Haoum, who performs community work in Heatherington and has many friends and family in the area, says violence in south Ottawa affects the whole city.

She doesn't feel the community needs more police, but rather more resources for young people, like after-school programs.

"It's Ottawa, it's our city," said Haoum. "And it doesn't matter if you're north, east, west, downtown — it's a whole community."

Rideau-Rockcliffe Coun. Rawlson King, who has proposed a handgun ban and a motion for other levels of government to address gun violence, also attended the rally.

King said it's important to have co-ordination between residents and community police officers to ensure resources are available, especially ones that focus on vulnerable youth.

He said the city is also launching a review of social services and how they're delivered.

"It has to be a multi-tiered approach," said King. "[We need] both measures to address gun violence as well as social investments in communities to ensure that youth have the best opportunities to enhance their futures."