Clive Doucet's transit plan may be too much, too soon

Mayoral challenger Clive Doucet is promising a regional commuter rail system and lower transit fares for each of the next four years if elected in next month's municipal election. Joanne Chianello takes the plan for a spin.

Mayoral challenger Clive Doucet is promising a regional commuter rail system and lower transit fares for each of the next four years if he's elected in next month's municipal election.

Doucet, a former city councillor and mayoral candidate, hosted a news conference Thursday on Lemieux Island, with the Prince of Wales Bridge in the background.

The disused rail bridge is central to Doucet's plans to run the O-Train over the Ottawa River into Gatineau, then on to Lorrain and Chelsea, Que.

You can't grow a transit system by making it more expensive to use every year. Nowhere in the world does this work.- Clive Doucet, mayoral candidate

"Today, the Prince of Wales Bridge is rotting," he said. "As your mayor, I'm committing to getting it fixed and connecting it to the rail network and restoring the economic, environment and social benefits this bridge brings to the city."

Other branches of Doucet's "Capital Region Rail" plan would extend to Fitzroy and Kinburn in Ottawa's rural west, Limoges, Ont., to the east and all the way to Smiths Falls to the southwest.

Mayoral challenger Jim Watson was quick to slam Doucet's plan on social media, calling it the "most incoherent transit plan Ottawa has ever seen."

I just heard one of my opponents in the City's Mayoral race release the most incoherent transit plan the City of Ottawa has ever seen. This "plan" has no costing, isn't backed by research and holds no credibility. And the candidate is proposing to stop Stage 2 LRT!! <a href="https://twitter.com/hashtag/OttVote?src=hash&amp;ref_src=twsrc%5Etfw">#OttVote</a>

A number of Watson's criticisms aren't accurate, though.

First, Doucet is not proposing to stop the current expansion of light rail.

He does want to see how the light-rail system runs for a few months before forging ahead with a contract for the $3-billion second phase, and seems open to tinkering with the route. But he made it clear Phase 2 will go ahead.

In fact there have been a number of less coherent transit plans in recent memory, such as 2014 mayoral candidate Mike Maguire's plan to replace the second phase of LRT with commuter rail. 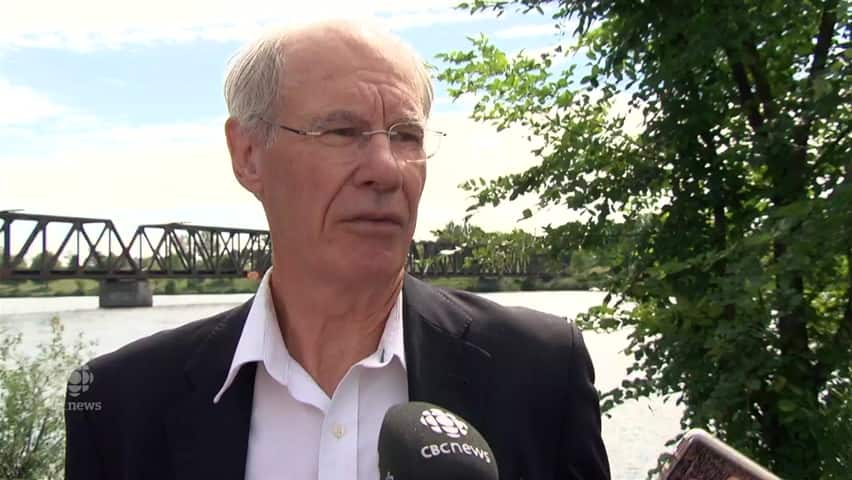 3 years agoVideo
0:44
Mayoral challenger Clive Doucet is promising a regional commuter rail system and lower transit fares for each of the next four years if elected in next month's municipal election. It might work, but can we afford it? 0:44

Watson has a point when he complains Doucet hasn't costed his plan, though.

Getting the Prince of Wales Bridge back on track would cost upwards of $40 million, according to city estimates. Doucet did propose bringing it online in stages, starting with pedestrian and cycling infrastructure.

Doucet believes as cities approach a population of 1.5 million, they need a regional rail service, and pointed to Toronto's Go Train system.

But the GO network is run by a provincial agency, not by the GTA and its surrounding communities. What Doucet is proposing would involve the a number of municipal governments on both sides of the provincial border, and getting them all to agree to a plan would be no mean feat.

Then there's the issue of running commuter trains along railways owned by Via Rail, such as the lines running to Smiths Falls and Limoges. The federally regulated rail company is notorious for its reluctance to share, and Via already runs its own trains through Barrhaven during rush hours.

Meanwhile, ownership of the railway leading into Chelsea is in a legal dispute. The track itself has been ripped up.

Despite these significant obstacles, Doucet's plan might still be possible — most things are with enough time and money. Connecting Ottawa with communities outside its borders to reduce congestion makes sense.

But Doucet's timeline for having the rails up and running by the end of the next term of council in 2022 is optimistic at best.

Doucet's other major transportation promise is to lower transit fares every year for the next four years, including reducing low-income fares and expanding free transit for seniors.

Doucet said he'd work out the details with staff and council, but said Ottawa has among the highest cash fares in North America. That trend can't continue if we want more people to use transit, he insisted.

"You can't grow a transit system by making it more expensive to use every year. Nowhere in the world does this work."

Doucet's plans may resonate with residents who find fares too high and service too unreliable. But paying for the LRT plan we already have relies on increasing fares by 2.5 per cent per year and taking a certain number of buses off the road.

It's unclear at this point what Doucet's plan will cost, or how the city can afford it. Nor is it clear how he can possibly get it all done in four short years.