'It's our home': Worshippers devastated after fire guts Nepean church

The city's fire department says the main building of the Living Waters Christian Assembly church will have to be demolished after a massive fire broke out Thursday afternoon. 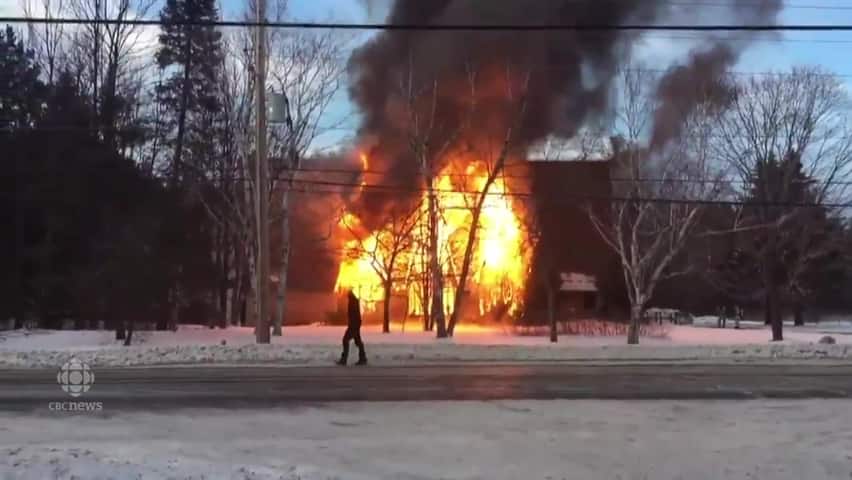 The city's fire department says the main building of a Nepean church will have to be demolished after a major fire broke out late Thursday afternoon.

At one point, a dozen fire crews battled the blaze at Living Waters Christian Assembly church near Merivale and West Hunt Club roads.

Reports of fire and smoke came in just before 4 p.m., and the first crews were on the scene at 105 Slack Rd.within minutes.

As of 5:30 p.m., about a dozen crews were fighting the fire. Flames poured through the church roof and were still visible at the top of the structure at 7 p.m., as firefighters continued to douse the structure with water from at least four hoses.

Cardinal said crews kept the fire from spreading to two nearby structures, but the main church building appeared to be a total loss.

Shortly after 9 p.m., Ottawa Fire Services sent a statement confirming that heavy equipment crews would be making their way to the Slack Road church to demolish the remainder of the main building for "security reasons."

The fire department also issued condolences to the members of Living Waters Christian Assembly for their "tremendous loss."

No injuries have been reported, although firefighters will be conducting a follow-up search once the fire is extinguished.

Trinity Noble, a volunteer with the church's youth program and the granddaughter of the pastors, said she was in tears when she heard that the building had caught fire.

She said she rushed to the scene after work.

"It hasn't really sunk in like at all. I kind of don't want to leave, because I feel like if I leave it's gone," she said.

"Like, it's our home. My whole family does so much for people and the church is awesome. We're just hoping that this isn't the end and there's more good stuff to come."

Noble said plans had been underway for a Christmas Eve service this Sunday, but she's not sure whether that will go ahead.

Her brother James also came to see what had happened.

"I'm just thinking of my grandparents and wanting to support them through all this and be with the people," he said.

The pair work with 457 The Edge, a youth group that holds concerts and runs a skateboard park at the church. He said their equipment has likely been destroyed.

"A lot of people call this place home," he said. "Not only on Sundays."

James Noble said he's decided to be hopeful that the fire could eventually lead to something positive.

"This does not look good at all right now. I mean, there's nothing left when you see something this horrible happening. But [I] choose to believe that something better can happen in the future."

Stephane Vermette, a volunteer and musician with the congregation, said he was devastated when he first heard of the fire.

"I broke down. I stopped by the road. I was in absolute tears. I couldn't believe what was happening," he said.

"The people [are] what really make the church happen," Vermette added. "It's just a building. It's a place where we go. But where are we going to go now?"

Police have been detouring traffic around the section of Slack Road where firefighters are working. Drivers can expect delays and are asked to avoid the area.

Fire investigators have begun investigating the cause of the blaze, the fire department said.

With files from Matthew Kupfer and Marc-André Cossette