Kayoki Whiteduck makes more than 25 types of tea using plants that grow at his west Quebec garden — and his business is starting to take off.

When Kayoki Whiteduck started gardening at 15, it was a punishment, not a passion.

After skipping out on a rugby game, Whiteduck's father made him work in the garden all day.

"I sowed my first seeds that year," the now 26-year-old said. "And I've been sowing seeds ever since."

About four years ago, Whiteduck started making tea from a handful of herbs at a family member's property in Chelsea, Que.

He's now running out of space in the one-acre garden.

"It's been getting bigger and bigger every year," he said. "Now, I have probably over 100 different kind of plants in this garden."

No green or black teas

From raspberries to mint to lemongrass, Whiteduck harvests all the different varieties to make more than 25 types of Kayo-Tea, which he sells at markets and a few Ottawa-area businesses.

But he's not making Earl Grey or Orange Pekoe. It's too cold in the region to grow Camellia sinensis, the plant used in most green and black teas.

Instead, he's one of only a few local tea makers focusing on herbal teas. His specialty? Mint.

"It's really easy to grow. It's super aggressive to grow. You can harvest a lot of it and I actually think it looks kind of beautiful," he said.

Whiteduck points out roughly 14 different types of mint in his garden including banana, orange, pineapple, chocolate and apple.

Although his garden is in Chelsea, Whiteduck lives in Kitigan Zibi, making the hour-and-half trip to the garden as often as he can. He has a few plants in Kitigan Zibi, and says his Algonquin background is part of his business.

"My grandmother and a lot of people on my reserve have a lot of knowledge about plants and stuff, and I've been slowly learning a bit … about what herbs I can use. I'm also half Dutch and I think that also has a role to play in [the] farming and agriculture side of what I do."

He says he'd like to use the $5,000 Pow Wow Pitch prize to buy a larger piece of land and expand his business, Mitigomin Agriculture.

Whiteduck thinks he impressed the judges because business is booming, but also because of his focus on "being good to the earth."

"You'll see in this garden, it's actually full of weeds. And that's not just laziness. It's also helping out the critters and the bees and the butterflies and any other part of the ecosystem." 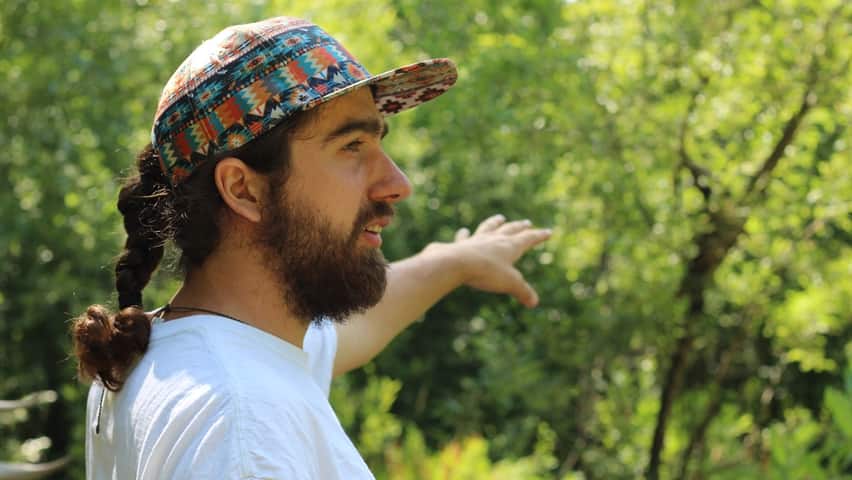 Want to make your own herbal tea? A local entrepreneur has some advice

2 years ago
1:30
Kayoki Whiteduck, from Kitigan Zibi First Nation, makes more than 25 different types of herbal tea, growing the herbs himself in his one-acre garden. 1:30

How to harvest herbal tea

When it's time to harvest his mint plants, he'll cut them down, bundle the stems in bushels, wash the bushels and then hang them upside down to dry for about two to three weeks.

"To know when it's the right time to start harvesting a plant, I'm looking for the height of the plant. For mints, you want them to be at least a foot tall before you start harvesting them, maybe two or three feet," he says.

He's already gone through this process for his stinging nettle plants, which he harvested a few weeks ago.

If you want to make your own tea, Whiteduck says it's pretty simple.

"A patch of peppermint is the easiest way to start and it's not hard at all."