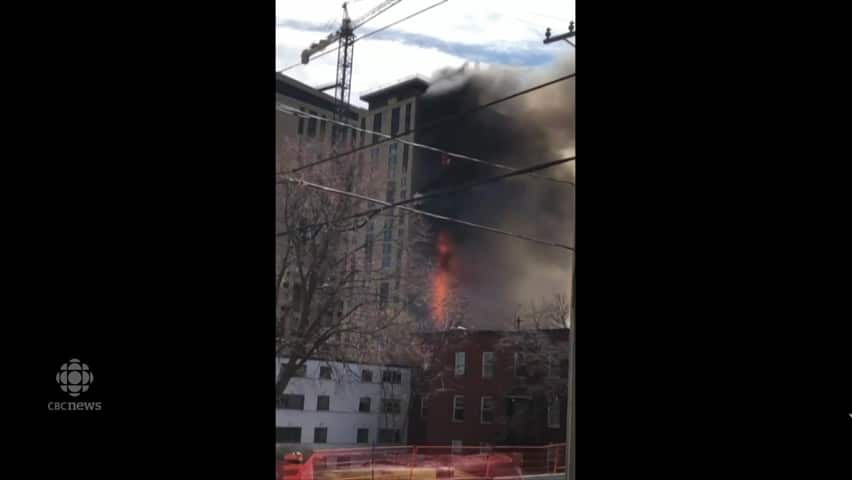 The fire started at about 11:35 a.m. Monday morning in a garbage bin on the exterior of the Ashcroft Homes Envie student housing building on Champagne Avenue S., between Hickory and Beech streets, just west of the O-Train tracks.

Flames quickly climbed about nine to 10 storeys, upgrading the fire to a third alarm and bringing extra firefighting resources to the scene, according to interim Ottawa fire chief Kim Ayotte.

Firefighters had extinguished the main body of the fire on all affected floors as of early Monday afternoon, and extensive overhauling to prevent the fire from spreading through walls was underway. 'All I was thinking about was my baby'

3 years ago
0:28
Construction workers describe being inside highrise when fire started. 0:28

About 160 construction workers were inside the building when the fire broke out. A man in his 30s was treated by paramedics for minor burns on his neck, but no other injuries were reported.

I was very scared. I was trying to get down as soon as possible.- Luc Alecoeur, brick mason

Brick mason Luc Alecoeur was one of many construction workers who had to flee the building when fire broke out.

"I was very scared. I was trying to get down as soon as possible," he said.

Alecoeur said he's about to become a father and was terrified he wouldn't escape the fire.

"All I was thinking about was my baby and what was going to happen."

Residents had been scheduled to move in starting in September, according to Coun. Jeff Leiper. Several units that had already been sold were damaged in the fire.

"It's too early for us to know exactly where we are, but obviously we're going to try to get things under control and continue on a quickly as we can," said Manny DiFilippo, Ashcroft's chief financial officer. 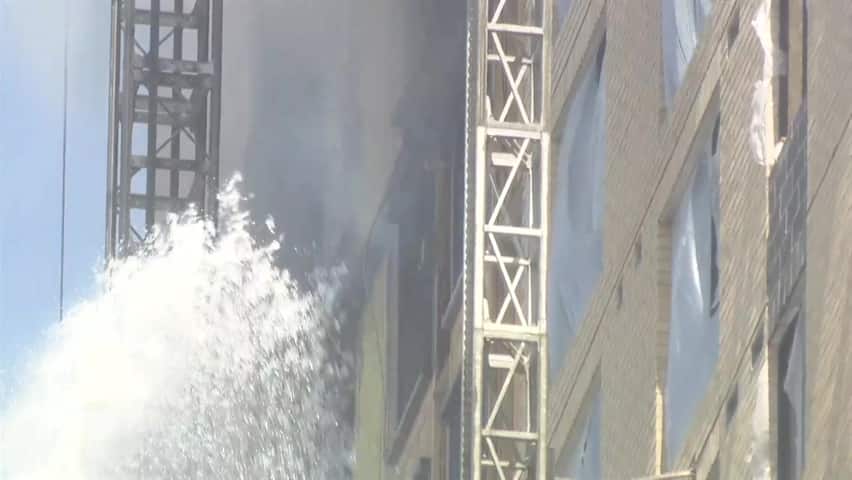 Champagne Avenue South is closed, and Beech Street is closed from Loretta Avenue to Railway Street.