Whoever spray-painted a vulgar word across the front window of Catherine McKenna's campaign office overnight has failed in their attempt to chase women out of politics, the Ottawa Centre MP said Thursday.

Whoever spray-painted a vulgar word across the front window of Catherine McKenna's campaign office overnight has failed in their attempt to chase women out of politics, the Ottawa Centre MP said Thursday.

Staff discovered the word "c--t" scrawled in red letters across a large image of McKenna's face on the front window of the office on Richmond Road, in the Ottawa neighbourhood of Westboro, around 8:45 a.m. Thursday.

The vandalism was reported to police, staff said.

"I don't even have words to describe what kind of person would do this," McKenna told reporters Thursday. "It's the same as the trolls on Twitter. It needs to stop."

McKenna, the environment and climate change minister for the four years leading up to last month's election call, told The Canadian Press last month that the threats and verbal abuse she's experienced since her election in 2015 have moved from online to real life. 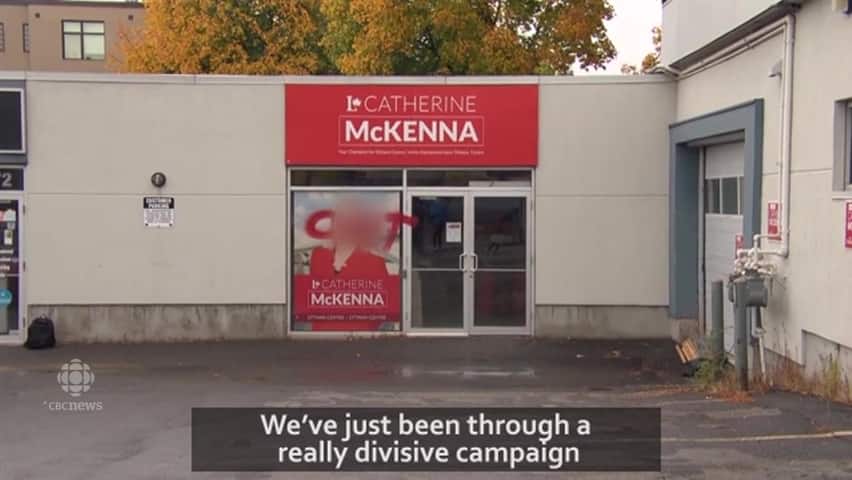 1 year ago
0:58
MP Catherine McKenna spoke to reporters Thursday morning after her campaign office was defaced with sexist graffiti.  0:58

When asked Thursday whether the latest incident makes her second-guess her decision to enter politics, McKenna responded with a firm "no."

"In fact, it makes it just so clear why it's so important to go into politics," she said. "Some people clearly want to chase women out of politics — that's not going to make politics any better."

McKenna linked the vulgar graffiti to the recent federal election campaign, which she called "very negative and divisive."

The Ottawa MP was re-elected Monday by more than 15,000 votes, according to Elections Canada. To McKenna, the graffiti is a further sign there's an ongoing need to improve politics in Canada, even now that the campaign is over.

"It's just going to make me re-commit to making it a better place for women [and] for diversity of all sorts."

There was some vandalism to McKenna's signs during the recent federal election campaign, but nothing like this, her office said.

Other politicians rallied behind McKenna Thursday, including Ontario Premier Doug Ford, who called the vandalism "disgusting."

"There is no place in Canada for hate like this," Ford tweeted. "While we may disagree on matters, we must always respect one another."

"It's horrible. Words can't express how angry I feel that someone would do this," said Coun. Theresa Kavanagh, who serves as Ottawa city council's special liaison on women's issues.

Kavanagh called for the tagging to be treated as a hate crime.

"We can't let it go. We have to make an example of it and come out strongly that this is unacceptable," Kavanagh said.

Ottawa police said unless there is corroborating evidence of a hate crime, the vandalism on McKenna's office would be considered mischief.

A spokesperson said no charges have yet been laid.