About 1,800 people who rely on Carp's communal well water system are being asked not to drink the water, even after boiling it.

Water service might not return in full until Wednesday, city says 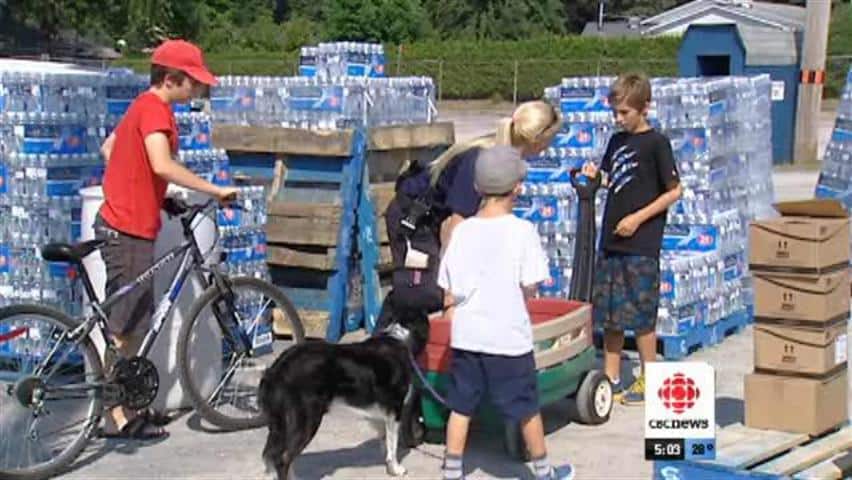 9 years ago
2:03
Carp residents are able to flush their toilets but still aren't able to bathe in or drink water from the communal well system. 2:03

It could take until Wednesday for full water service to be restored to about 1,800 people who rely on Carp's communal well water system.

People in the area are being asked not to drink the water, even after boiling it. Residents are permitted to flush toilets but should not bathe in the water, the city said.

The city issued the advisory Sunday, citing a mechanical failure at the well facility.

Officials said the failure happened Sunday afternoon when fire trucks hooked up their hoses to hydrants close to a brush fire.

The high demand overwhelmed the system, causing a pipe to burst. That burst pipe flooded the pump station, damaging equipment and electrical systems.

"A loss of pressure in the water distribution system can allow the leakage of groundwater, possibly containing micro-organisms and other contaminants, through small holes and fissures in the water lines," a media release issued by the city said.

The news comes during a heat advisory first issued by Environment Canada on Sunday, which continued Monday. Ottawa's medical officer of health issued a heat warning after humidex values rose above 40.

The city is distributing bottled water and non-potable water for sanitary purposes at the Carp Fairgrounds from 8 a.m. to 11 p.m.

Meanwhile, firefighters said any water needed to fight fires in the area will be taken from a nearby lake, and won't affect service.