The driver of a car that had a dramatic collision with a cyclist in Ottawa's downtown core on Saturday says he's shaken by the collision but remains grateful no one was seriously hurt. 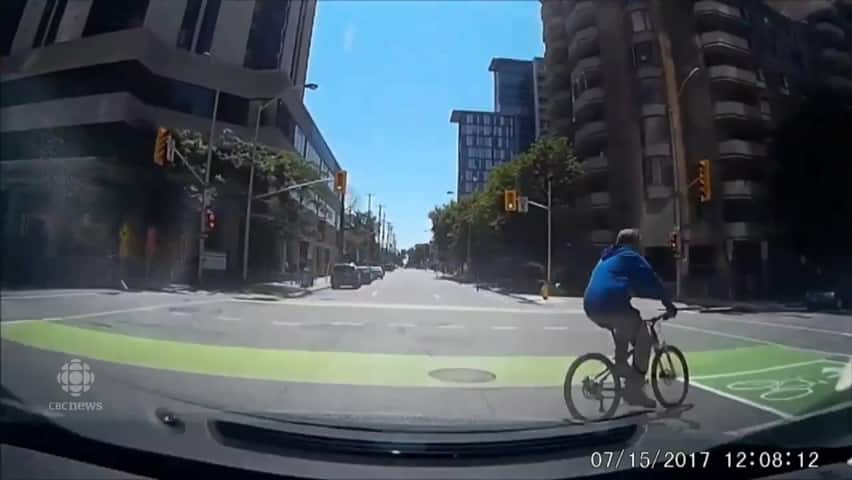 3 years agoVideo
0:25
Dashcam video shows a cyclist who biked through a red light getting hit by car in downtown Ottawa on Saturday. Paramedics said the cyclist was not injured. (Video: Nick Fleury/YouTube) 0:25

The driver of a car involved in a dramatic collision with a cyclist in Ottawa's downtown core on Saturday says he's shaken by the incident but remains grateful no one was seriously hurt.

Edward Law and his wife were driving from Gatineau to Ottawa's Chinatown along Lyon Avenue on Saturday afternoon when the collision happened at the Laurier Avenue West intersection.

A dashcam video from a vehicle to the left of Law's car showed a man cycling through a red light and then colliding with Law's car. After the impact, the man hits the car's windshield and rolls off, as the bike flies several metres through the air, nearly hitting a pedestrian on the opposite sidewalk.

I don't think I could have done anything in the second it all happened,- motorist Edward Law

Law said before the intersection he had turned into the left lane because of a parked moving van, and then returned to the right lane just before the collision.

He said with the car to his left, he had a blind spot and couldn't see that the cyclist had entered traffic until it was too late.

"I don't think I could have done anything in the second it all happened," he said.

Law said it appeared the bike hit the driver's side front bumper of the car, and the cyclist went over the hood, with his body — and thankfully, adds Law, not his head — colliding with the passenger's side windshield. He then catapulted onto the street, but got up "pretty quickly."

Law and and his wife got out of the car to see if the cyclist was OK, but he said a police officer happened to be parked nearby and quickly responded. The cyclist was assessed at the scene and refused to be sent to hospital.

"It was fortunate for everyone," Law said.

Though there didn't appear to be serious injuries, Law said he can't help replaying the scene in his head.

Law's car has a dented hood and cracked windshield, and on Monday he took it in to get a cost assessment. He said he feels fortunate that the car appears to have borne the brunt of the impact.

"I'm glad for that," he said. "The only thing was just material damage."

Police later charged the cyclist with running a red light.

A conviction for failing to stop for a red light under the Ontario Highway Traffic Act carries a fine of $260 plus surcharges. Motorists, but not cyclists, are also given given demerit points upon conviction.